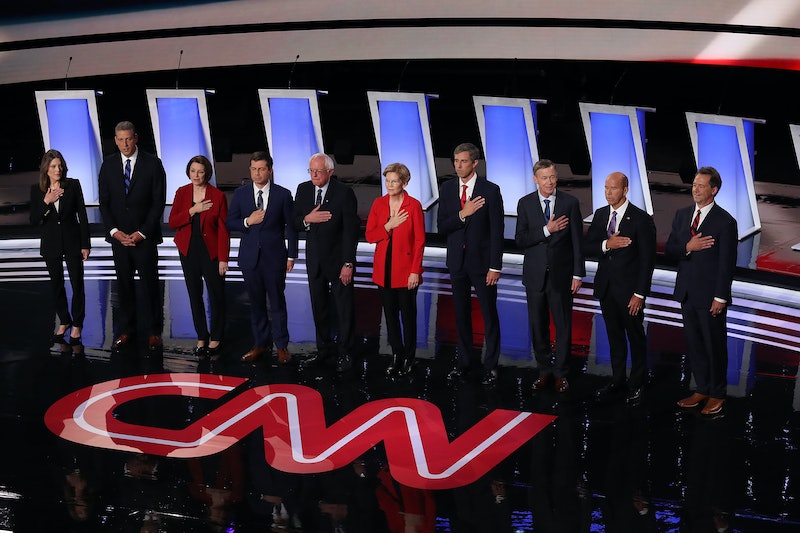 Gun violence was a central topic of discussion during Tuesday night's Democratic debate. CNN moderator Don Lemon asked the candidates about three large-scale shootings in the U.S. over the weekend, and specifically what the all-white lineup of candidates would do to stop "this epidemic of gun violence." Among the solutions they proposed were standing up to the National Rifle Association, closing various gun sales loopholes, and banning assault weapons. But activists and researchers tell Bustle that how the Democratic candidates talked about gun violence left out communities of color.

All of the candidates who responded to Lemon's question said they would pass a universal background check law, a ban on the sale of assault weapons, and legislation that bans or limits high-capacity magazines. Many of them also mentioned closing the gun show loophole, which doesn't require private sellers to complete federal background check requirements, and the boyfriend loophole, which allows stalkers, former boyfriends, and dating partners who have been convicted of domestic violence to buy weapons.

Shannon Watts of Moms Demand Action for Gun Sense in America tells Bustle that, while the fact that every candidate talked about gun violence shows that it's a defining issue in the campaign, a crucial part of the discussion was left out.

"They were in Detroit that night, and mainly what we heard the candidates talking about were mass shootings and school shootings," she says. "I think they should be talking more about how gun violence impacts communities of color."

While mass shootings may make the most news, "it's the daily gun violence that rips at the fabric of America," Watts adds. "It's homicides in city centers, domestic gun violence, gun suicides in rural communities that really has turned America into a nation of gun violence survivors, and candidates need plans to address all of it."

While the candidates focused on mass shootings and school shootings in the majority of their answers, studies have shown those events make up the minority of gun-related deaths. In addition, gun violence disproportionately impacts communities of color, according to the National Council on Family Relations. The homicide victimization rate for black people in the United States is more than four times the national rate, according to data from the Violence Policy Center, and 84% of black homicide victims are shot and killed with guns.

Communities of color, particularly black communities, also face an increased risk of violence from police. According to an analysis of data on national police shootings from 2011 to 2014 performed by University of California, Davis doctoral student Cody T. Ross, "the probability of being black, unarmed and shot by police is about 3.5 times the probability of being white, unarmed and shot by police."

Black activists and people of color have been mobilizing against gun violence in their communities for decades, but their work is often overlooked. After the shooting at Marjory Stoneman Douglas High School in Parkland, Florida, that left 17 students and faculty dead, many activists noted that, although it was powerful how many people took up the Parkland students' cause, it stood in stark contrast to the lack of support that Black Lives Matter has received in its fight to stop police brutality.

Melina Abdullah, co-founder of the Los Angeles chapter of Black Lives Matter, tells Bustle that there was a "gaping hole" in the candidates' gun violence answers. "You can't really address gun violence without addressing police violence," she says.

Abdullah says it's also the fault of the moderators, who posed just one question about officer-involved shootings to South Bend, Indiana Mayor Pete Buttigieg, who's faced criticism at home after local police shot and killed a black man.

"I think that it's really important that an explicit question be raised around police violence — what do the candidates plan to do around questions of police violence and police reform?" she says. "How do they plan to hold officers accountable? I think it needs to be raised that officers are almost never held accountable for brutalizing and killing members of the community."

But asking the right questions may only solve part of the problem with discussions about gun violence in the debates. According to Charlie Ransford, senior director of science and policy at Cure Violence, a nonprofit that "stops the spread of violence by using the methods and strategies associated with disease control," the candidates also left out public health approaches to preventing and stopping violence.

The Cure Violence model, for example, was designed by Dr. Gary Slutkin, who worked on an HIV/AIDs program in Africa. The model treats violence like a "contagious problem" and uses the same approaches that experts would use to stop the spread and transmission of Ebola, or HIV and AIDs, to reduce violence — and it's been proven to work. Cities and organizations that use the model "regularly experience reductions in violence within the first year ranging from 40-70% and greater reductions in subsequent years," according to the organization's website. Watts says that Moms Demand Action helped get more funding for a similar program in California, called CalVIP.

Ransford says he would like to hear candidates talk more about gun violence as a health issue. He points out that Sen. Elizabeth Warren has done this, and Mayor Bill de Blasio has helped the Cure Violence model in New York City grow to be the largest program in the world.

But while most candidates say they support more research on gun violence in the United States, Ransford says that's still not enough.

Ransford says candidates could put forward plans that provide resources to evidence-based community programs like Cure Violence, since a lack of resources prevents communities from creating their own programs. "We have a ton of cities that are interested that are calling us all the time," he says, "but there's just not the funding there to implement these kinds of solutions."

"I hope that the candidates take it a little bit more seriously tonight and talk about what the racist rhetoric that we've been hearing out of the White House, in terms of policy and practice, and how it's felt by black folks in our everyday lives," she says.