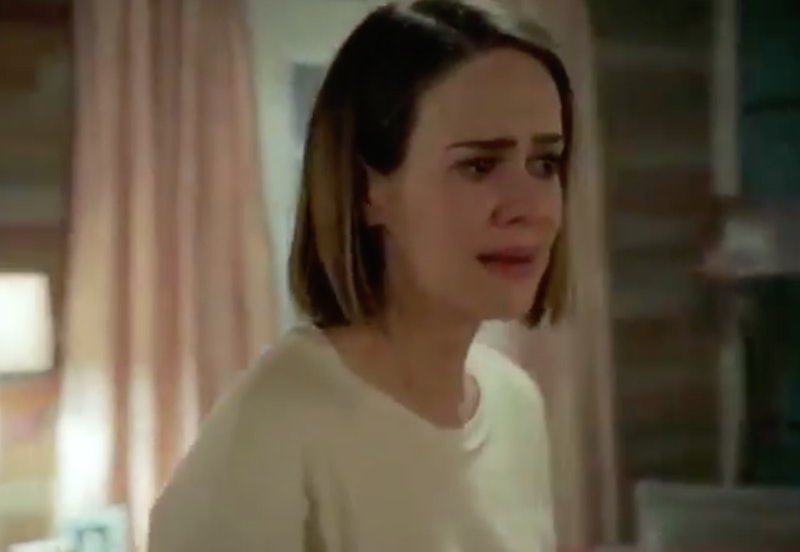 After numerous hints and vague clues, the American Horror Story: Cult trailer was released on Tuesday and... election night just somehow got scarier. The politically charged seventh season focuses on Ally (Sarah Paulson), a resident of Michigan who's seen screaming in terror after Donald Trump's win is announced on election night. As a result of his triumph over Hillary Clinton, Ally's crippling phobia of clowns resurfaces, as she tells her therapist (Cheyenne Jackson) in the clip, "Since election night it has all been getting so much worse." Ally's problems are only made worse by one of the season's antagonists, Kai (Evan Peters), who has an opposite reaction to the night's results and pretty much sees the excitement in all of the chaos. He recruits Billie Lourd's character, Winter, to act as a nanny for Ally and her wife Ivy (Alison Pill) which ultimately takes things way further left than anyone could have imagined.

Though there might not be many fans of the show who can say their fear of clowns has heightened since election night, there's no denying how real the official trailer makes it all seem in regards to the many responses there were to Trump's win.

The results of the most recent election brought about reactions that fell on completely opposite ends of the spectrum from a great deal of people — some of which are now living in fear like Ally and her family. While others, like Kai and Winter, could take advantage of the disarray his win has caused. It is clearly symbolic of how divided the country has become post-election night.

Regardless of the fact that the creepy trailer alone may cause you to lose sleep, it's really exciting to see all of the imagery that's been teased over the past month come together. The jury is still out on where those bees fit in, though.

More like this
Man Meets Politics: ‘Boy Meets World’ Star Ben Savage Is Running For Congress
By Jake Viswanath
The 'Teen Wolf' Creator Revealed If 'Wolf Pack' Takes Place In The Same Universe
By Grace Wehniainen
The 'Gossip Girl' Reboot Creator Is “Looking For A New Home” To Air A Potential Season 3
By Brad Witter
'The Crown' Season 6 Has Suspended Filming "Out Of Respect" For The Queen's Death
By Bustle Staff
Get Even More From Bustle — Sign Up For The Newsletter
From hair trends to relationship advice, our daily newsletter has everything you need to sound like a person who’s on TikTok, even if you aren’t.