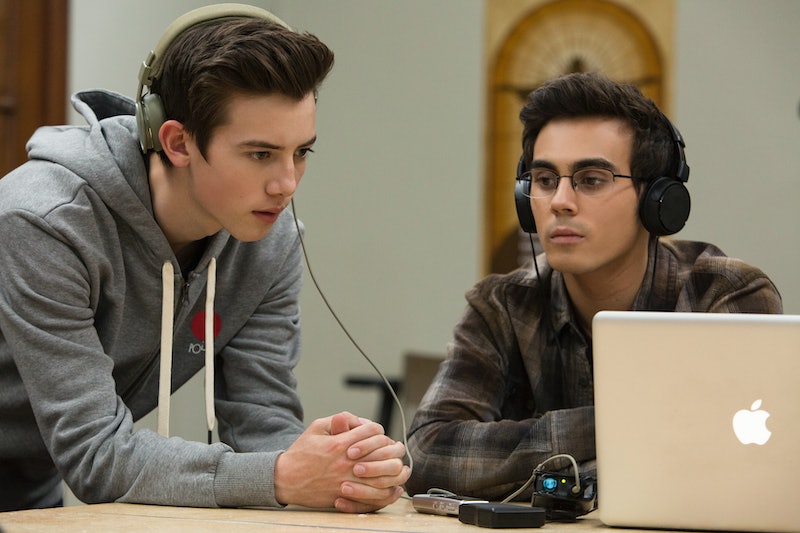 Spoilers ahead for the Season 2 finale of American Vandal. When Season 1 of American Vandal debuted on Netflix last year, the question on everyone's mind was, "Who drew the d*cks?" Eight episodes later, as the credits began to roll on the Season 1 finale, that question still hadn't been answered. Sure, the first season gave us all the clues and evidence that seemed to point in the direction of the true culprit of the genital graffiti (*cough Christa Carlyle cough*). But despite all the theories and arguments, the finale's ambiguous ending left us with more questions than definitive answers, and that ending is part of what made the first season such a compelling watch. But the American Vandal Season 2 ending couldn't be more opposite. The sophomore season ends with the identity of the Turd Burglar revealed, the culprit brought to justice, and all the victims essentially living (relatively) happily ever after, though they're left with the lingering trauma of witnessing The Brownout.

It turns out that elite Washington state Catholic school St. Bernadine's resident serial pranker, the Turd Burglar, wasn't the student who was initially expelled for the poop proceedings. Well, he actually kind of was, but not totally. In a major twist, American Vandal revealed in the latter half of Season 2 that the main culprit behind all four (that's right, four) fecal felonies was none other than Grayson, a disgruntled student who had been expelled from St. Bernadine's previously for making jokes about "chlamyds" on Twitter using school computers.

Enraged that other students were getting away with much worse, he created a fake online persona of a hot girl, catfished a bunch of people (including the teacher who got him expelled) and convinced them all to send him extremely private and embarrassing photos and videos. He then used all that to blackmail his victims into executing the poop crimes on his behalf. An even bigger twist than the Turd Burglar being several different people was that the initial suspect Kevin McClain actually was one of the people being catfished, but it turns out he was the only victim who committed his crime without being blackmailed first. He simply did it because he wanted Brooke Wheeler — Grayson's online persona he used to catfish his victims — to like him. This season really didn't pull any punches when it came to the darker, sadder tone, huh?

But having the second season turn into what was essentially an extremely satisfying episode of Catfish was a hard left turn that no one saw coming. American Vandal has never shied away from using social media to drive the story forward (never forget Nana's Party in Season 1). But the Netflix true crime mockumentary has never before explored the psychological damage and real-world consequences social media has on teens like this.

The effect was truly sobering. The four poop-etrators weren't the only ones caught in Grayson's web: he ended up catfishing hundreds of other people, but only blackmailed four people to carry out his crimes. It's a shocking revelation, but it's blunted by the fact that nearly every question you might have had about the mystery at the beginning of the series is ultimately resolved. By the end of the season, things had relatively gone back to normal at St. Bernadine's. Grayson was arrested for everything. Three of his catfishing victims who carried out the crimes under duress got off relatively easy. But since Kevin wasn't blackmailed and committed one of the crimes of his own volition, he finished out his house arrest sentence as previously ordered. American Vandal even followed up with him a little bit later, showing that he would still be all right in a kind-of-happy ending with his friends.

All of this stands in contrast to the vague ending delivered back in Season 1. While Season 2's no-loose-ends finale may have felt immediately satisfying, in the hours and days after, as the conclusion really sinks in, it's apparent that American Vandal is not better when viewers are given all the answers. Not only does it take some agency away from fans to debate with each other and figure out the answers on our own, it also feels too perfect, making the mockumentary feel fake in a way it never has before.

True crime television shows, movies, and podcasts hardly ever get perfect endings or deliver all the answers. The genre is known for leaving things open-ended, simply because most of the cases are still unsolved or deeply complicated in real life. True crime is, for lack of a better word, real, and with reality comes the messiness of not having every answer packaged and wrapped up in a nice, neat bow. That doesn't make it any less satisfying; in fact, true crime fans love playing detective and trying to solve what others can't.

If American Vandal was trying to one-up itself and improve on its critically-acclaimed first season, it's understandable if the writers thought that delivering more answers in Season 2 was the way to go. Expectations were already incredibly high after the show's near-perfect first outing, and avoiding the sophomore slump in TV is an admittedly difficult feat.

But unfortunately, Hanover High's resident doc team Peter and Sam just got way too good at their jobs — and that ended up hurting Season 2 overall. We no longer have to wonder, "Who is the Turd Burglar?" and wondering, theorizing, and debating is truly half the fun. Hopefully that means Peter and Sam will get an A on their project, but Netflix is definitely getting some points docked on its final grade for Season 2. Next time, give us just a little less, let viewers figure some things out on their own, and that A will be earned once more.

Correction: A previous version of this story misidentified the Turd Burglar. It has been updated to accurately reflect the character's identity.