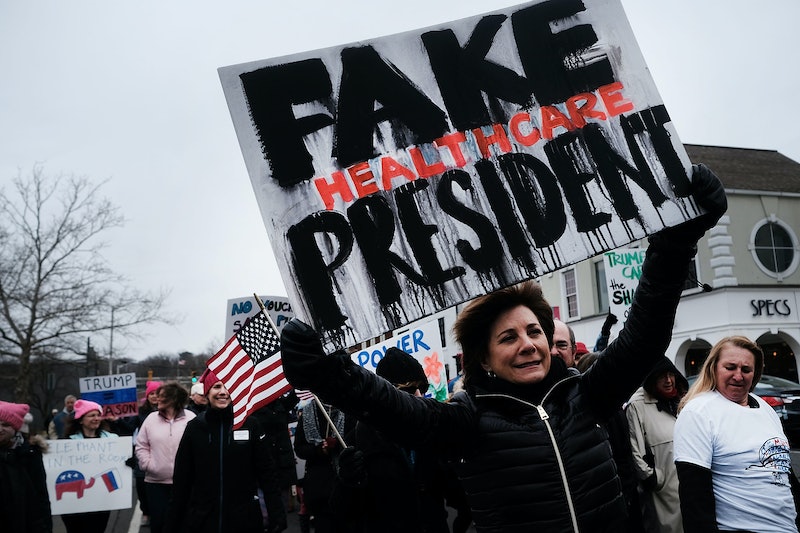 It's been almost three months since President Donald Trump was sworn into office, but protests surrounding his administration have showed no signs of slowing. As the president continues to shape and enact his policies, a steady stream of protests and demonstrations have been carried out in response on everything from access to contraception to recent military actions. The bigger anti-Trump protests in April, though, seem to have a specific focus on the president's taxes and the environment.

On Thursday, protestors gathered on the president's home turf. After protestors flooded the lobby, security had to shut down access to Trump Tower, the center of the mogul's real estate operations and the current residence of First Lady Melania Trump and her son, Barron.

According to Reuters, protestors gathered in front of the elevators of the Fifth Avenue building in New York City and chanted "no ban, no raids, no wall." Twenty-five people were arrested in the protest against the administration's refugee ban and crackdown on immigration, which was held just after Trump launched 59 Tomahawk missiles in Syria.

But protests around the country are planned for the rest of April. Here are some of the bigger events being held to resist against Trump.

You could say that every year people are silently protesting on the IRS deadline for filing taxes. But this year it's a little more organized. Across the country, people will march on April 15 to demand that Trump release his tax returns. Throughout his campaign, Trump promised to release years of tax returns, a common practice for presidential candidates.

As CNN notes, the protests started to come to life after Trump adviser Kellyanne Conway said the outcome of the election showed that Americans "didn't care" about the billionaire's tax returns. The national protests, which will take place in 48 states, seem to refute that statement.

April 15 is the typical deadline for filing taxes, but because the day fell on a Saturday, this year's actual deadline is April 18. So you don't have to scramble to get your taxes done before getting out there and demanding that the president release his own.

Coinciding the Earth Day, the March for Science describes itself as the "first step of a global movement to defend the vital role science plays in our health, safety, economies, and governments."

Although on its face it isn't an expressly anti-Trump march, the event organizers don't mince words in laying out their mission: "Science, scientists, and evidence-based policymaking are under attack. Budget cuts, censorship of researchers, disappearing datasets, and threats to dismantle government agencies harm us all, putting our health, food, air, water, climate, and jobs at risk. It is time for people who support science to take a public stand and be counted."

The main March for Science will take place in Washington, D.C. on April 22, but over 425 satellite marches are planned for the same day.

There are a couple of protests being held on April 29, Trump's hundredth day in the White House. The biggest one focuses on environmental issues. The People's Climate Movement will hold a march in Washington, D.C., along with hundreds of sister marches around the world. The march follows the giant 2014 gathering in New York City at which 400,000 people took to the streets to call for action against the "global climate crisis." This year, though, the march has retooled itself to specifically target the Trump administration for what it sees as a harmful to the cause.

Meanwhile, for those who feel like a little PDA, #KissAwayHate is also planning a march around Trump's hundredth day. The movement, which started after the deadly Orlando massacre targeting LGBT people in June of last year. #KissAwayHate has organized events across the U.S. The ultimate goal of the organization is to stop the spread of religious fundamentalist intolerance again the LGBT community. And how? "We are fighting back with the simplest form of expressing love— a kiss," the mission reads.