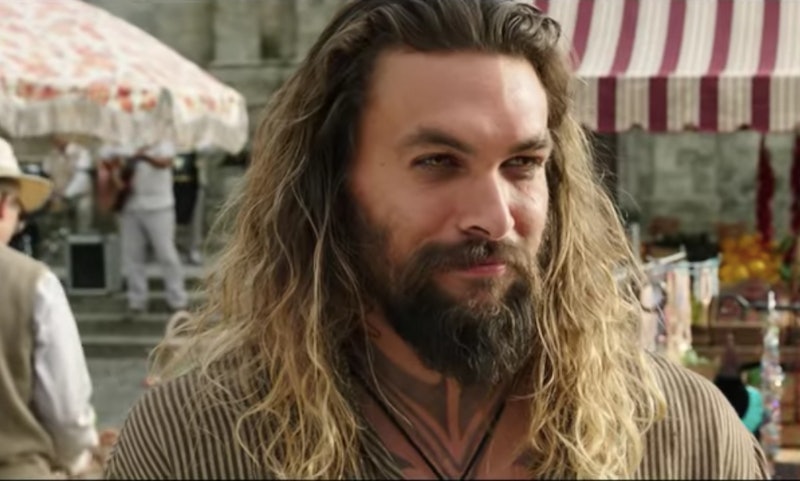 Major spoilers ahead. The ending of Aquaman, to no one's surprise, is a happy one for the hero. But, unless you leave before the credits, viewers don't get to go home thinking Arthur Curry is totally in the clear. Aquaman has a post-credits scene (well, technically a mid-credits scene) that brings back one of the movie's villains and another character who viewers only got a short glimpse at earlier in the film.

Aquaman (Jason Momoa) is at odds with his half-brother, Orm (Patrick Wilson) for the entirety of the film, but there's another villain in the form of Black Manta (Yahya Abdul-Mateen II), who ends up working for Orm. Manta is a pirate whose job is to hunt down Aquaman, and he's more than willing to do it because Aquaman killed his father. (Or, perhaps, greatly contributed to killing his father. Aquaman put him in a position where he was almost certainly going to die, but then the guy killed himself in order to stop his son from trying to save him.) Things end in the Manta versus Aquaman situation after a battle in Italy, but that is not the last of him because...

Manta shows up in the post-credits scene! He's floating on a raft and is found by Dr. Stephen Shin (Randall Park). Shin then takes Manta back to his home/conspiracy theory den and finds out that his armor and equipment is, in fact, from Atlantis. Earlier in the movie, during Dr. Shin's only other scene, he's shown on a TV news show talking about Aquaman and his belief that Atlantis really exists. He's presented as a conspiracy theorist, because no one else on the surface, save Arthur and his father, seem to know anything about the underwater world existing.

Now, even without knowing anything about the Aquaman comics, the post-credits scene still immediately checks out, if only because Randall Park is famous and, like, he was only in that one short scene before — of course he's back. But, more importantly, Manta and Shin both exist in the Aquaman comics.

Manta has quite the history. According to Den of Geek, he first appeared in the comics 1967 (Aquaman debuted in 1941), and since then went through multiple reinventions of his origin story and also killed Aquaman's baby who is called Aquababy. The site explains that there is a comic in which Manta and Orm both appear, but the story that happens there is different than the one we see in the new movie. Either way, Manta's big in the Aquaman comic world, so it's not too surprising that the post-credits scene sets up a potential return for him.

If Aquaman 2 happens will Manta encounter the son of his nemesis? Momoa mentioned Aquababy in an interview with MTV News (via Comicbook.com) while nudging co-star Amber Heard, who plays his love interest Mera and Aquababy's mom in the comics), adding that "there's so many possibilities." Heard responded, "You can be there with Aquababy, and I'll be doing Mera." Aquaman as a stay-at-home dad. Sounds like a plan.

As for Stephen Shin, in the comics, he starts off as a friend of Aquaman, but then things take a turn. According to Bounding Into Comics, Shin is a marine biologist, and was a friend of Arthur and his father, Tom. Shin helps a young Arthur learn about his powers (like, getting him to communicate with fish, because he is a marine biologist, hello), but he becomes more and more obsessed with learning where Atlantis is and turns on Arthur and tries to kill him when he won't tell him how to get there. Shin isn't nearly as old a character as Manta; according to Comic Vine, he was introduced in 2011.

Digital Spy explains that Shin and Manta have interacted in the comics, but they weren't on the same team as the movie's credits scene seems to be setting up. According to Digital Spy, in the comics, "After Manta stole an Atlantean relic, he teleported to Shin and tried to get his help to find another one. Unwilling to betray Aquaman again, Shin refused and Manta threatened to kill him, only to be thwarted by Aquaman."

As of now, it's up in the air whether there will even be an Aquaman sequel, but if there is, you can expect more Dr. Shin, more Manta, and possibly an Aquababy — maybe even one with a better fate.