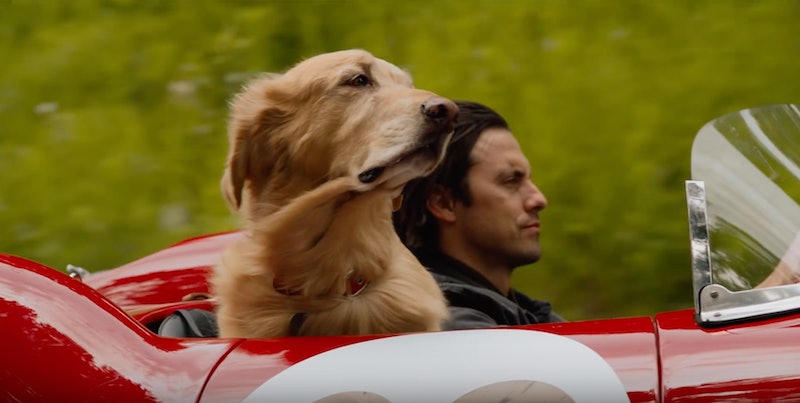 It’s a commonly known fact that nothing brings greater joy to most people’s lives than puppies, with the exception being cat people or those allergic to animals. Therefore, the recent slew of movies told from the perspectives of dogs, like A Dog’s Journey and A Dog’s Way Home, were totally inevitable. But the newest addition to the canine canon, The Art of Racing in the Rain, might be the best dog movie yet. Why, you ask? Because Milo Ventimiglia, of Gilmore Girls and This Is Us fame, and Amanda Seyfried star in the film. But, don't worry, the new The Art of Racing in the Rain trailer shows viewers who the true star of the show is: the pup!

The new film follows Ventimiglia, who plays Denny Swift, an aspiring Formula One race car driver, as he chases his dreams on the racing track. Somewhere along the way, he stumbles along a litter of golden retrievers on the street. One of the pups calls out to him — and he just happens to be voiced by Kevin Costner. The pup is quickly adopted by Swift, named Enzo, and, just like that, their journey begins.

Narrated from Enzo's point of view, because no other perspective matters, the trailer lovingly recounts the dog's journey with his owner. In a series of short clips, Enzo is seen standing by Denny's side through major life events, including his career growth, his marriage to Eve (Seyfried), and, as seen in a very touching moment in the trailer, Eve's pregnancy with their daughter (Ryan Kiera Armstrong). “Call it fate, call it luck," Enzo says in the trailer. "All I knew was I was meant to be his dog." The tears are already starting to well up.

The official film synopsis, as reported by TheWrap, reads:

"The Art of Racing In the Rain is a heartfelt tale narrated by a witty and philosophical dog named Enzo. Through his bond with his owner, Denny Swift, an aspiring Formula One race car driver, Enzo has gained tremendous insight into the human condition and understands that the techniques needed on the racetrack can also be used to successfully navigate the journey of life."

The Art of Racing in the Rain is an adaptation of Garth Stein’s best-selling 2008 novel of the same name, and is directed by Simon Curtis (My Week With Marilyn). It also hails from the same studio that produced Marley and Me, another infamous movie about a dog that made everyone sob simultaneously at theaters across the country.

The film went through multiple iterations before finally being released this year. Initially, in 2009, Universal Pictures optioned the film rights to Stein’s book and cast Patrick Dempsey in the role of Denny. Eventually, development took longer than anticipated, and the project stalled until Walt Disney Studios picked it up in 2016, according to The Hollywood Reporter. Evidently, those plans also went haywire as 20th Century Fox ended up producing the final product, which opens in theaters on August 9. The movie also stars Gary Cole, Kathy Baker, and Martin Donavan in currently unknown roles.

In 2019, if there's two things guaranteed to make American audiences cry, it's dog stories and This Is Us. So, consider this your warning to bring an infinite amount of tissues and junk food to eat the pain away when you go see The Art of Racing In The Rain.

More like this
You Might Want To Rewatch 'Elvis' For This Britney Spears Easter Egg
By Grace Wehniainen
Everything You Need To Know About The 'Knives Out' Sequel
By Grace Wehniainen
Is Austin Butler Really Singing in 'Elvis'?
By Arya Roshanian
The 'Hocus Pocus' Sequel Finally Has A Release Date & It Makes Total Sense
By Shannon Barbour and Radhika Menon
Get Even More From Bustle — Sign Up For The Newsletter