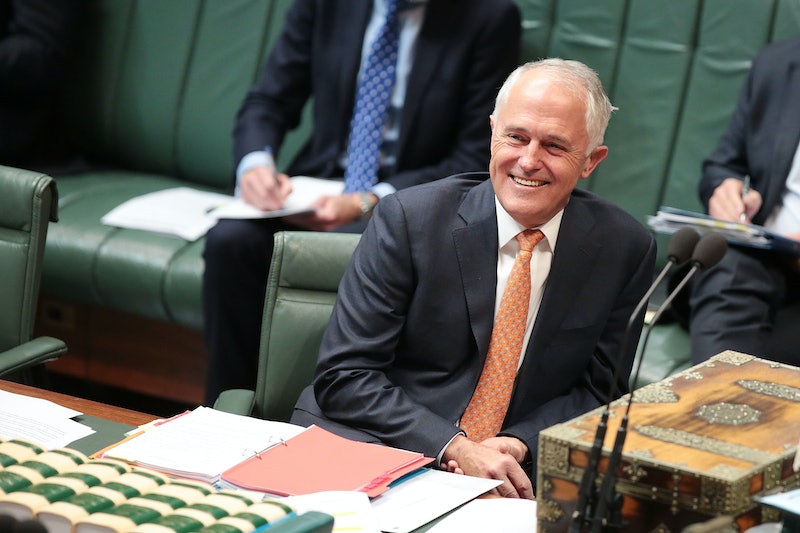 President Donald Trump's singular oratory style has often made for great comedic fodder, but it isn't just for Saturday Night Live. More recently, Trump's speaking style was parodied by Australian Prime Minister Malcolm Turnbull — and it was all caught on audio tape.

The recording of Turnbull copying Trump's speaking style was out of international media's sight and mind until Channel Nine, one of the major Australian networks, aired the audio clip.

In true Trump-ian style, Turnbull goes on to talk about those meddling "fake" polls — possibly referring to Trump's style of deriding news outlets. "Not the fake polls, they're the ones we are not winning. We're winning in the real polls," Turnball said to the roaring crowd.

The recording comes a few months after Trump's heated phone conversation with Turnbull about the two countries' agreement to accept refugees from Australia. Trump reportedly described as the "worst call," and he railed against the agreement on Twitter, calling it a "dumb deal." Later on, the president attempted to diffuse the tension by calling his relationship with Turnball as "fantastic."

While speaking on 3AW, an Australian radio station, Turnbull clarified his digs at Trump as "affectionate" and "light-hearted" while also stating that he was disappointed that the recording had been leaked to the public. Good-natured roasting is common at the Midwinter Ball, as it is at the White House Correspondents' Dinner. Trump hasn't issued a statement on the event, though given the recordings of Trump mocking others himself, it's unclear if he will.

Still, if folks take offense at Turnbull's impersonation of Trump, the Australian leader has a plan for 2018's Midwinter Ball. "I guess what this means is at the Midwinter Ball next year, I will read selected passages from budget paper No. 2," Turnball said. Now that sounds exciting.