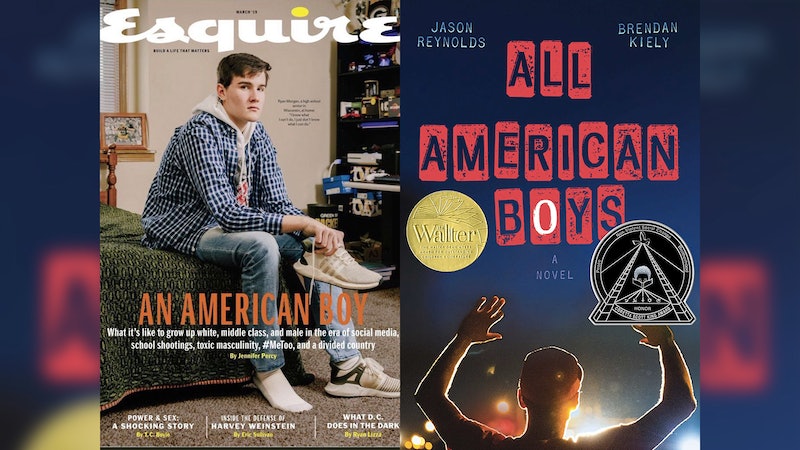 What does "an American boy" look like? According to Esquire's March 2019 cover, he's Ryan Morgan, a white high school senior from Wisconsin. He can't remember what #MeToo means (“I’ve heard of that,” he says. “What does it mean again?”), even though the cover lines suggest the story is about being a teenage boy in the era of #MeToo. Ryan’s story is intended to be the magazine's first installment of a series about growing up in America today, according to editor-in-chief Jay Fielden.

The cover and coinciding feature have been widely criticized for presenting a white teenage boy’s perspective on growing up with an immense amount of privilege, particularly since the cover was released during Black History Month.

"Esquire should've just titled it: A White American Boy," says Jason Reynolds, one of the co-authors of the 2015 young adult novel All American Boys, in an interview with Bustle. "If you want to be bold, be clear and bold."

Reynolds says the controversy isn’t just focused on this particular teenager’s story, but rather on the broader implications of using the phrase "All American boy."

Reynolds, who is Black, co-wrote All American Boys with Brendan Kiely, who is white, to challenge what that phrase means. The YA novel is about two teenagers named Rashad and Quinn, one Black and one white, and the repercussions of a violent incident involving police brutality.

“One thing Brendan and I talked about in the process of writing All American Boys, and still talk about often, was the default image that comes to mind whenever the term 'all-American' is used,” says Reynolds. “We’ve often stood in front of crowds and asked them to point out which of us is the all-American boy, and then deconstructing why it never seems to be me." What the Esquire cover perpetuates, he says, "is the same thing that 'all-American boy' connotes — that the white, heterosexual, able-bodied male is the standard."

Reynolds and Kiely use their platform as storytellers to talk about toxic masculinity and male privilege and teach boys what they can do with their privilege to make the world a better place.

"One thing Brendan and I talked about in the process of writing All American Boys, and still talk about often, was the default image that comes to mind whenever the term 'all-American' is used."

Reynolds believes books should educate readers, from a young age, about toxic masculinity so that "they don't grow up believing the false narrative that men, just because they are men, are somehow superior to women."

"We teach young boys about sharing, listening, and respect when they're in pre-school and kindergarten, but then punish them when they don't follow through with any of it in high school, because we somehow figured sharing, listening, and respect didn't need to be reinforced between learning to count, and learning to drive," he says. "These words only become virtues through cognizance and practice.”

He and Kiely wanted to address this directly in All American Boys, because the cultural attitudes that reinforce toxic masculinity begin shaping boys at a very young age. According to research from the American Psychological Association, masculinity is presented to young boys as toughness, stoicism, heterosexism, self-sufficient attitudes, and lack of emotional sensitivity.

Stephanie Nilva, the executive director of Day One, a nonprofit organization that focuses on reducing domestic abuse by working with youth, believes it is critical to help teenagers build an understanding of systemic oppression by introducing teenagers to discussions about male and white privilege.

"Media can undo the damage that their action or inaction has caused by lifting up the marginalized voices that were silenced or have not yet been heard," she tells Bustle in an email. "They can identify toxic masculinity and male privilege for what they are — systems of oppression and precursors to control and violence (which are exacerbated by white supremacy) — instead of presenting them without comment.”

'All American Boys' by Jason Reynolds and Brendan Kiely
Amazon

In All American Boys, Reynolds and Kiely examine how toxic masculinity and white privilege work together to create systemic oppression. They wanted readers to empathize with the experience of a Black teenager who’s the victim of police brutality and a white teenager who has to decide whether to speak up and use his privilege in a positive way.

"Media can undo the damage that their action or inaction has caused by lifting up the marginalized voices that were silenced or have not yet been heard."

That pluralism was intentional; the multiple perspectives, presented side-by-side, provide a more nuanced exploration of privilege and masculinity.

"Part of the problem with the Esquire piece is that it is singular, and the singular story it chooses to tell (even if it is the first in a series) centers an experience that has already been at the center of so many stories and narratives,” Kiely says in an email to Bustle. “It suggests that because that centering is being (rightfully!) challenged in our society today, the burden of having to be aware of one’s whiteness, maleness, cishet-ness, is somehow unfair.”

In writing All American Boys, Kiely felt it was important that the book didn't become a "white savior narrative," a story in which a white person becomes a hero for people of color (most often Black people) and is celebrated for their involvement (while the very real risks for people of color are downplayed). This narrative plays out in countless popular stories, including The Help, To Kill a Mockingbird, and The Blind Side.

"Part of the problem with the Esquire piece is that it is singular, and the singular story it chooses to tell (even if it is the first in a series) centers an experience that has already been at the center of so many stories and narratives."

Instead, he writes white characters who become better partners, better listeners, and more humble. As a child, most of his role models were men, and he thinks that part of the problem with toxic masculinity is that boys and men fail to see, hear, or learn from the leadership of women. "I wanted to address that directly in All American Boys,” he says. “I specifically wanted Quinn to learn more about his own whiteness and white privilege from Jill, so that he takes his cues and leadership from a young woman in his class.”

Through her work with young people, Nilva understands that toxic masculinity fails young women and young men, and recent research shows that men who rigidly conform to traditional definitions of masculinity are more likely to harm themselves or others. “Toxic masculinity relies on a limited understanding of what masculinity is and could be — dominance, stoicism, physical strength,” she says. “Our work shows us that when young people, including young men, are supported to express strength and leadership that do not prioritize those attributes, they have a greater capacity to make connections across difference and to build empathy.”

Conversations about toxic masculinity seem to be on the rise, given that Esquire dedicated space to the concept on its March cover. According to data provided to Bustle by SEMrush, a company that focuses on online visibility and analytics, people's interest in toxic masculinity has increased by 657% from December 2018 to January 2019.

Public conversations about sexual violence, police brutality, racism, toxic masculinity, male privilege, and white privilege have been at the forefront of the media and politics, and Reynolds says that kids today aren’t just craving these conversations, they’re craving change.