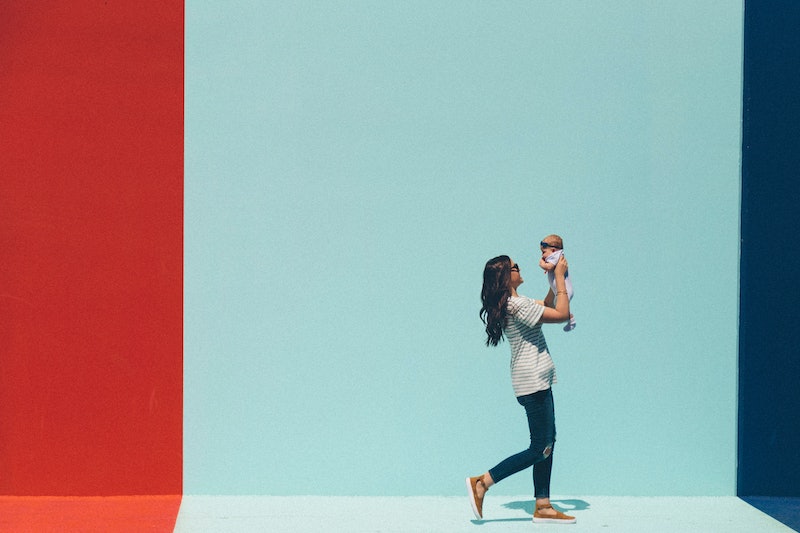 To paraphrase the esteemed Rihanna, the life of a mother is work, work, work, work, work, work. There might be a bubble bath or breakfast in bed somewhere in there, but for the most part, a mom's day is spent doing stuff for other people. In fact, according to a recent study, working moms put in almost 100 hours of labor each week when you combine the time spent on family and work duties. Consider this your daily reminder that mothers are pretty much superhuman.

This week, Working Mother reported that Welch's Grape Juice commissioned a study of about 2,000 mothers with children between the ages of five and 12 years old. It looked at a few different areas of motherhood, but the most striking finding by far is how long a mom's day lasts. According to the study, the average working mother's day starts at the ungodly hour of 6:23 a.m. and lasts until 8:31 p.m. That's a 14-hour day. The study's authors multiplied this by seven, concluding that between paid and domestic (read: unpaid) labor, moms spend 98 hours a week working.

As many have pointed out, that's equivalent to holding down two full-time jobs. It's no wonder, then, that the study also found that four in 10 women said their lives felt like a "never-ending series of tasks."

As if the picture painted by the study wasn't bleak enough, it also reports that the moms surveyed had just an hour and seven minutes to themselves each day, most of which is presumably spent locked in the bathroom, pretending children don't exist.

It should be noted that the 98-hour work week might not be the most accurate estimate; most full-time jobs run five days a week, not all seven. But the "second shift" — the domestic labor that awaits women, especially mothers, when they get home from work — is a well-documented problem in the United States. Nearly 30 years ago, sociologist Arlie Hoschild published a book on the subject, concluding that it caused women to work a month longer than their husbands each year.

Since then, the gendered nature of domestic labor hasn't gotten much better. In 2016, a study reported that having a husband creates seven extra hours of housework per week for women. A different report last year found that no matter where they are in their career, women do more domestic labor than men, and the amount of responsibility at home seemed to affect their desire to climb the corporate ladder. It's easy to understand why, considering how much work mothers have to put in each week.

So if you're a mother or planning to become one, exhaustion is clearly the name of the game until men start shouldering their share of housework and childcare. In the meantime, at least you can depend on wine to give you a rosé — er, rosy — outlook on life.