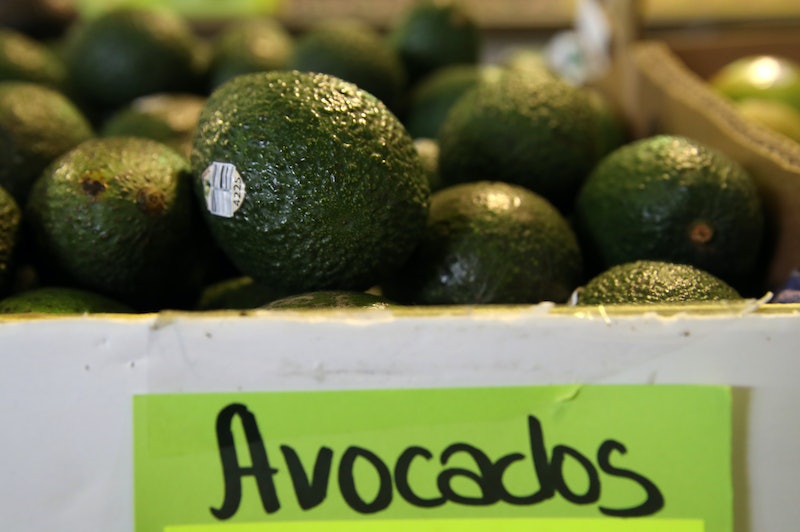 Border policy can affect all sorts of things, including the produce that ends up at our local grocery stores. One example of this was after President Donald Trump threatened to close the southern border, avocado prices from Mexico increased. On Tuesday, Bloomberg reported that the price of Mexican Hass avocados shot up by 34 percent, and the last time such a surge took place was in April 2009.

The vice president and senior analyst at Rabobank, Roland Fumasi, told Bloomberg that the price may jump even higher if Trump actually makes good on his threat. "Avocado prices could easily double or triple if we shut down the border," Fumasi told Bloomberg. The publication noted that the intense heatwave in 2018 that hit California, a state that grows large amounts of avocados, deepened America's reliance on Mexico. "Because California is late and it’s a small crop, Mexico is accounting for nearly all of our avocados," Fumasi said to Bloomberg.

If Trump closes the southern border, the import of avocados from Mexico could even come to a standstill. The president of the Mission Produce, the world's biggest producer and distributor of avocados according to Forbes magazine, told Reuters that if Mexico shut down its supply of the fleshy green fruit, America could run out of avocados in less than a month.

It's hard to predict the possibility of that happening, but based on what Trump said in late March, it very well might. "I’ll just close the border," he said at the time. "When you close the border, also you will stop a lot of the drugs from coming in."

NBC News reported that in an interview with Fox News Sunday, White House counselor Kellyanne Conway said of Trump's threat: "It certainly isn’t a bluff. You can take the president seriously."

Still, there may be other ways to satiate Americans' appetite for avocados. In addition to California, Florida and Peru produce them, too, though as Forbes noted, these places tend to cater to regional markets most of the time; California's avocados are shipped around the West Coast and Florida to the southern tip of the country.

For the people who use avocados to make guacamole, as slices in their burgers, as a side for their meals, or added in a simple salad, the price surge of this fruit is certain to bother avid foodies. And as Fumasi noted to Bloomberg, if Trump does indeed close the border, Americans may have to look for an alternative for one of their favorite superfoods.