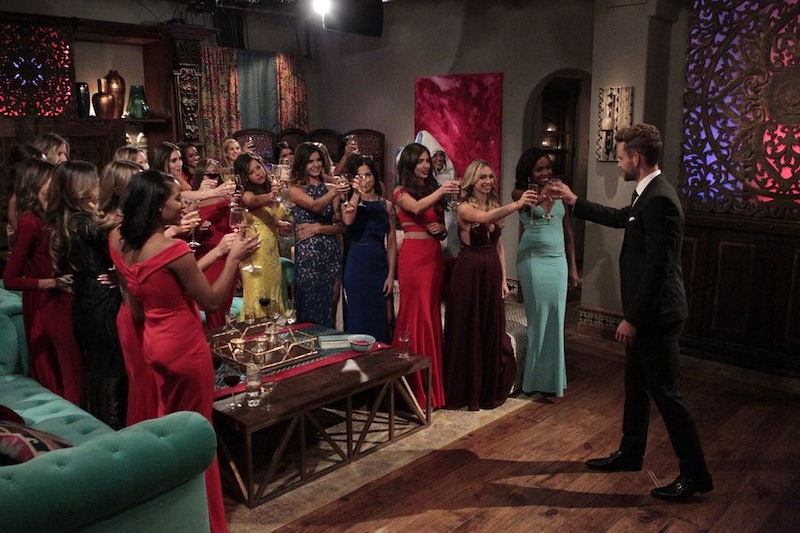 I know that The Bachelor and Bachelorette contestants have to live somewhere while they film the show, but I legit thought that the Bachelor mansion was just a long-term rental or a house the series owned that looked good enough to tape limo entrances in front of. But, weirdly enough the Bachelor mansion is someone's actual home. An actual family lives there — well, when the show isn't filming. Color me shocked. Am I the only one who's super surprised by this? I am extremely intrigued.

In an exclusive interview with Us Weekly, the Bachelor mansion owner, Marshall Haradan, discussed what it's been like for him and his family to share their Agoura Hills, California home with so many hopefuls looking for love on reality television ever since Season 11 when Brad Womack was the lead.

Obviously, Haradan and his kids don't live there while the contestants do, but it's still not-at-all-typical that the family uproots their lives for the show to film. Haradan shared, "They're here 42 days, twice a year."

Plus, the family gets put up in a hotel by production, so they get paid to share their house (although Haradan wouldn't reveal how much) and they don't need to pay for an alternative place to live.

As weird as it sounds, I would definitely take this opportunity if I had the chance. Sure, it is majorly disruptive to move an entire family's belongings twice a year, but it would be so cool to play such a key role in an iconic reality TV franchise.

The other reason that I was shocked by the Bachelor mansion not being a set or an empty house is that I follow most of the former contestants on social media, so I've noticed that there have been events at the legendary pad. Two-time Bachelor contestant Becca Tilley had a blog launch at the mansion and invited plenty of Bachelor Nation members.

Tilley's girl (and iconic reality TV cast member) Ashley Iaconetti posted a photo from the party with her original Bachelor love interest Chris Soules and her sister, Lauren Iaconetti. In the post, Iaconetti remarked on how different the crib looked from her Bachelor days with the caption, "The Rose Ceremony room looks a hell of a lot different when they're not filming, but @souleschris always looks hella fine."

I wonder if they cleared out the family furniture for that event too and if the Haradan family was invited. Either way, I'm sure they profited and I am just hoping that they got to meet the Bachelor stars — and take pictures with them all for Snapchat and Instagram, obviously.

I could not imagine watching the show and seeing people making out, fighting, and crying in my living room or backyard, but I have to admit that I would love it.