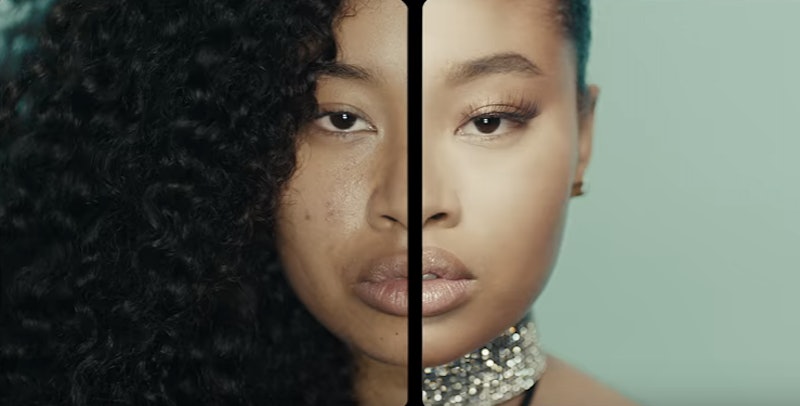 To say there's been a paradigm shift in the hip-hop world regarding beauty standards would be a stretch. The male-dominated genre is not only notorious for misogyny but also known to glamorize, exalt, and exploit scantily clad women with hourglass figures, long straight hair, and an "exotic" look. But despite Kendrick Lamar's best efforts to highlight natural beauty in his latest music video "Humble," model Carter Kim faced a different and problematic kind of criticism. Kim told Elle magazine she was disheartened by the backlash she faced about her mixed race ethnicity and long curly hair.

In "Humble" Lamar raps, "I'm so f*ckin' sick and tired of the Photoshop/ Show me somethin' natural like afro on Richard Pryor/ Show me somethin' natural like ass with some stretch marks." In the video, Kim transforms from a glammed up video vixen into a fresh-faced, everyday look and proudly shows off her stretch marks. However, the 21-year-old said some black women had a problem with her casting. She told Elle,

"I used to get teased for my hair and told my hair is fake. I'm a little puzzled because a lot of it comes from African American women. I'm just like, why wouldn't you empower another African American woman who's just trying to pave the way for her career and also just represent us as women in a music video that has now gone viral. I would just think they would be happy with that, but everyone finds something."

After Lamar's video went viral, many women were displeased with seeing a mixed race woman being used as an emblem of natural black beauty. One woman tweeted, "He LITERALLY has a sugar-brown mama with a Brazilian body-wave frontal on while he's talking about 'show me that kinky TWA fro girl.'" Kim explained to Elle that she is Korean, French, and African American, and that her multicultural heritage has cost her jobs. "I've gotten denied for being black a few times. Surprisingly, that has happened and I have gotten 'not black enough.'"

Lamar's admirable, expletive-laden lyrics speak to issues with archaic, unattainable, and filtered beauty standards, and including Kim to turn the conversation on its head by showing another form of beauty is something we should see more often. But the idea of not being black enough is an insufferable, age-old concept that continues to divide black people. It's guaranteed that if you ask any black person what it means to be black you will get entirely different answers.

Another layer to this "not being black enough" issue is the complex history of light-skinned privilege. In short, lightness is the closest thing to whiteness and as such light-skinned women are often afforded more opportunities and viewed as more beautiful than dark-skinned women. In Kim's case, her harshest critics are upset that a mixed race woman was chosen over a dark-skinned black woman for the music video role because it could mean that she is perceived to be more beautiful and desirable than a 100 percent black woman. It's understandable that there is tension there and it's historically based, but whether light-skinned or dark-skinned or mixed, skin tone does not dictate whether someone is black.

Although I am not mixed race, I empathize with Kim when it comes to facing the "What are you" question. I am light-skinned with freckles with a big curly 'fro and big lips. People often assume I'm either biracial, creole, or Dominican. Despite the fact that I came from a dark-skinned black father and light-skinned black mother, I'm asked what I am or where I'm from every other day. When I say "Black" with all the pride I have, I receive the unwelcome and, at times, hurtful response of "That's it?" as if to say my black features do not align with this person's concept of what blackness looks like.

My dark-skinned sister, on the other hand, is hardly ever asked about her ethnicity nor does she feel the pressure to validate her blackness, as I have occasionally felt the need to do. But do either of us embody the image of blackness? One person cannot exemplify every aspect of a race. As Kim said, it's "puzzling" to continue holding onto this idea that there is a "right way" to look and be black. Can't every shade of blackness be black enough?

For Kim to face such repugnant criticism from black women reveals the toll of colorism and self-hatred has taken on the community. This need to "check" one's black card is so pervasive and normalized it has ironically been turned into a card game called "Black Card Revoked." Although it is all in good fun to test each other on black pop culture and history facts or approve of who can and cannot attend the cookout, there is a greater implication to what we are doing and the harm it can cause.

All forms of black beauty should be honored. One music video featuring one woman who is meant to represent us is not the final say on a black woman's beauty. To reject, deny, and critique Kim's blackness only perpetuates the self-hatred that centuries worth of racism has inflicted upon us. Whenever I see Viola Davis, I see myself in her — the same way I can see myself in Tracee Ellis Ross and Issa Rae and Kerry Washington and Zoë Kravitz. Carter Kim is now on that list because her blackness does not come with restrictions.

More like this
"Lavender Haze" Star Laith Ashley Breaks Down Filming With Taylor Swift
By Jake Viswanath
Ozzie’s Coming Out Scene With Kitty On 'That ’90s Show' Has Twitter Sobbing
By Brad Witter
Twitter Is In Awe Of Taylor Swift’s “Lavender Haze” Music Video
By Jake Viswanath
5 Wild Theories About Miley Cyrus’ “Flowers” Music Video
By Jake Viswanath
Get Even More From Bustle — Sign Up For The Newsletter
From hair trends to relationship advice, our daily newsletter has everything you need to sound like a person who’s on TikTok, even if you aren’t.