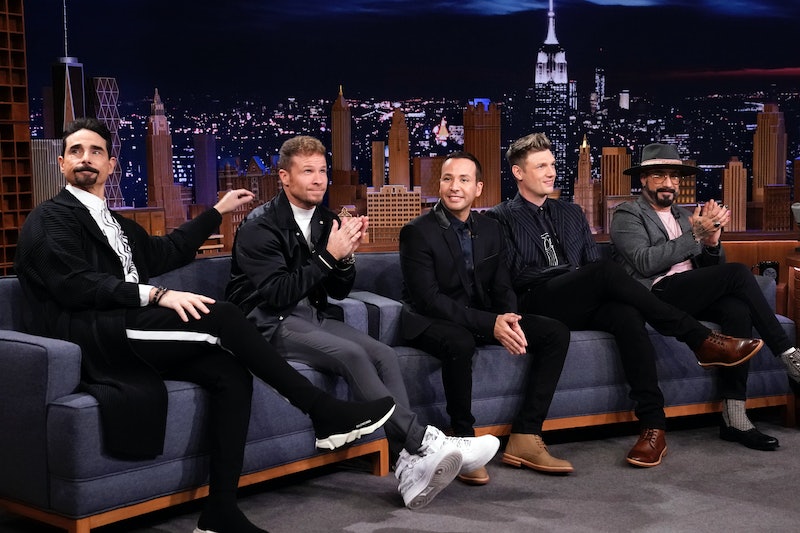 When the world is in turmoil, you can always depend on a '90s boy band to provide the comfort you so desperately need. The Backstreet Boys performed "I Want It That Way" from their own homes on iHeartRadio's Living Room Concert for America. And not only is it the perfect source of comforting nostalgia, it's also one of the most epic examples of social distancing we've seen thus far.

Nick Carter, AJ McLean, Kevin Richardson, Howie Dorough, and Brian Littrell each sang the classic Backstreet Boys ballad from their own living rooms across the country, with Carter in Las Vegas, Dorough in Orlando, and the rest of them in Los Angeles. Despite the distance, they harmonized as if they were in the same room, sounding just as good as the original recording.

It was an impressive display of vocal ability and boy band showmanship given their distance, and it was further improved with appearances from some of the Backstreet Kids. Richardson's sons helped him out on drums and guitar (well, ukelele) and Carter's adorable toddler hung out with his dad by the pool at one point. If that doesn't make you feel warm and fuzzy enough to distract from the ongoing pandemic, nothing will.

The Boys' number was just one of several at-home performances that were a part of iHeartRadio's Living Room Concert for America, hosted by Elton John (also at home). The concert was put on in lieu of the postponed iHeartRadio Music Awards, which were originally set for March 29.

The special brought together big-name stars like Lady Gaga, Billie Eilish, Alicia Keys, Demi Lovato, Tim McGraw, Billie Joe Armstrong, Shawn Mendes, and Camila Cabello, who offered encouraging messages and performances of their signature songs to raise money for those in need due to the coronavirus pandemic. According to Deadline, the concert raised over one million dollars to benefit Feeding America and the First Responders' Children's Foundation.

The impact was not lost on the Backstreet Boys. After the concert, the band posted a clip of their performance on Instagram, writing, "Honored we could be part of this incredible event." And for the sake of everyone's sanity, it would be great if they could continue singing Backstreet classics from afar while everyone's at home — perhaps "Show Me the Meaning of Being Lonely" could be next?