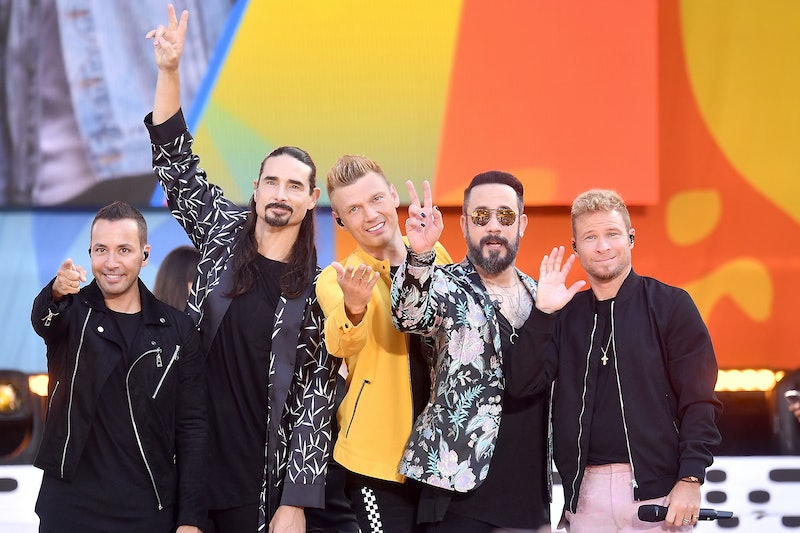 Backstreet’s back, all right, and they’re dishing secrets. In anticipation of the release of their tenth studio album DNA on Jan. 25, boy band legends the Backstreet Boys revealed their least favorite song in their catalog, and they’re not mincing words about how much they absolutely hate it. In their #DNAuary YouTube series for their upcoming album, four out of five Backstreet Boys said their worst song ever is “If You Want It To Be Good Girl (Get Yourself A Bad Boy)”. Or, as AJ McClean puts it, the song is “the biggest piece of cr*p.” Ouch!

AJ McClean, Nick Carter, Brian Littrell, Kevin Richardson, and Howie Dorough have been together as the Backstreet Boys for 25 years now, so they've made a lot of hit records. And, in their latest YouTube video for #DNAuary, titled Backstreet Confessions, they talk about everything from their first impressions of meeting each other to who the biggest prankster in the group is (spoiler: it's Carter). They disagreed on some stuff, but (almost) all of them were in agreement about their biggest musical misstep — everyone’s least favorite song is “If You Want It To Be Good Girl (Get Yourself A Bad Boy).” Richardson called the song “horrible,” and McClean really slammed it saying, “That song should never have been recorded. It is the biggest piece of cr*p.” At least they can talk candidly about their failures.

There’s one person who didn’t hate it though, and that’s Carter, probably because, as Littrell said in the video, “You know why the fans love that song? Because Nick is singing the whole dang thing.” He then did a stunning impression of Carter’s voice on the song, which, despite all their hate, still slaps. Carter added coyly, "I don't really have a song I don't like."

Even though the Boys themselves might not love the track, there are fans that do. In fact, some on Twitter felt a little betrayed by the Backstreet Boys when they learned that they hated the song off their 1997 album Backstreet's Back. Actress Candice Patton tweeted, "AJ, I will love you till the end of time as I promised I would to my life size poster of you in my childhood bedroom, but you are wrong! 'If You Want It To Be Good Girl' is an absolute BOP for the ages!" And she's not alone. Twitter user @BugattiJimbo was indignant, tweeting "I will not tolerate this 'If You Want It to Be Good Girl (Get Yourself a Bad Boy)' slander. Even directly from the @backstreetboys."

When looking at the song now (far and away from your super hormonal teenage years), you can understand why BSB might be embarrassed by this specific tune. From the title suggesting that a woman can't totally own her sexuality (but a bad boy could offer her that) to certain cringeworthy lyrics throughout, McClean's hindsight and criticism checks out.

The #DNAuary confessions video also revealed that Carter was the merry prankster of the group, putting soap in Dorough's open mouth while he was sleeping. Dorough got him back, though, by putting tiger balm down his pants. Another reveal from the video: apparently McLean made the dorkiest first impression. "He wanted to be so bad, but he was so preppy," Litrell said. Dorough added, "He would come up in a button-up denim shirt and a tie... and he had a briefcase." That is not bad boy behavior at all. No wonder he hated the song.

BSB is going on their DNA World Tour in May, their biggest arena tour in 18 years, according to People. It will come right after they finish their Las Vegas residency Backstreet Boys: Larger Than Life in April and will start in Portugal. It remains to be seen whether or not they perform"If You Want It To Be Good Girl (Get Yourself A Bad Boy)." It is, after all, a classic.

Editor's note: This article has been updated from its original version to include more analysis of the song's lyrics.

More like this
Britney Spears Shares & Deletes Photos Of Justin Timberlake From 22 Years Ago
By Jake Viswanath
Cruz Beckham Teased New Music With An Adorable Nod To Mom Victoria Beckham
By Stephanie Topacio Long
The Spice Girls Are Set To Reunite At King Charles III’s Coronation
By Sam Ramsden
'Friends' Star Maggie Wheeler Offers Support To Matthew Perry After Reading His Memoir
By Alyssa Lapid
Get Even More From Bustle — Sign Up For The Newsletter
From hair trends to relationship advice, our daily newsletter has everything you need to sound like a person who’s on TikTok, even if you aren’t.