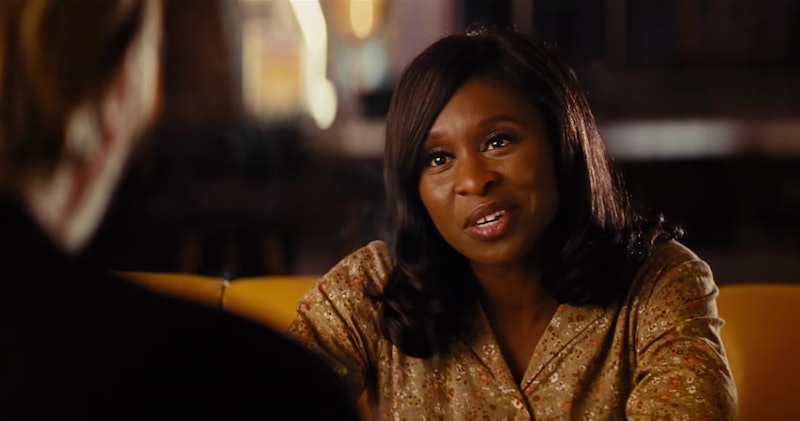 A fake priest and a cult leader walk into a hotel... It sounds like the set up to a bad joke, right? In fact it's actually the plot — or just a fraction of the plot — for the movie Bad Times at the El Royale, which will hit theaters on Oct. 12. The movie's set in 1969, and the Bad Times at the El Royale soundtrack is about as colorful (and important) as its characters, which include the aforementioned priest (Jeff Bridges) and cult leader (Chris Hemsworth), but also a hippie (Dakota Johnson), a Motown singer (Cynthia Erivo), and a Southern traveling salesman (Jon Hamm). All of them meet at — you guessed it — a hotel called the El Royale.

Just based on the trailers for Bad Times at the El Royale, you can instantly tell that the movie will transport you to a zany, dangerous setting, and the music plays a big part of it. In the teaser trailer, the Isley Brothers' "This Old Heart of Mine" plays as the plot seems to set the stage for a comedy — Hamm's character hams it up as a salesman telling Bridges' character that the El Royale is "no place for a priest," and all seems well and good. Then, the upbeat song halts halfway through the trailer when a shadowy figure open another man's hotel room and shoots him in the back. The teaser doesn't go as far as having a record scratch play in that moment, but it definitely could have.

On Oct. 12, a soundtrack album and a score album came out, and you'll want to order them on Amazon or iTunes today. Spotify also has an official album that you can stream, so you have plenty of options for how you'll re-live the glory of the movie, and its 1960s setting. The soundtrack includes The Four Preps' "26 Miles (Santa Catalina)," Frankie Valli's "Can't Take My Eyes Off You," The Crystals' "He's Sure The Boy Of Mine," The Box Tops' "The Letter," and more. The only artist missing from the soundtrack is Cynthia Erivo, whose character, Darlene Sweet, sings an assortment of Motown covers in the film. You'll have to see the movie to experience those. Michael Giacchino composed the score.

Bad Times' writer and director, Drew Goddard, told Empire Online, "The movie is set in 1969, and the music of the era is incredibly important to the film." Between the music playing from the soundtrack throughout the movie and Darlene's show-stopping performances, you definitely get the sense that the song selection was key for Goddard.

Not only will Bad Times at the El Royale make you appreciate the classics, but it will also get audiences excited about Erivo's incredible role that many critics have hailed as a show-stopping performance. Goddard told Empire Online that he wanted Erivo to sing live (without pre-recorded tracks) in the movie. "I didn’t want [her] to lip-sync — and when you see the film you’ll understand why," the director said.

Erivo's singing might produce the most impressive scenes from Bad Times at the El Royale, but the whole movie brings audiences on a thrilling and twisting journey. You'll never be able to listen to the classic songs that the movie features in the same way again.

More like this
Everything You Need To Know About ‘Black Panther: Wakanda Forever’
By Bustle Editors
A New Scooby-Doo Movie Confirmed Velma Is Gay & Twitter Is Pumped
By Radhika Menon
Lindsay Lohan & Jonathan Bennett Celebrated Mean Girls Day Very Differently
By Jake Viswanath
20 Photos Of The 'Hocus Pocus' Cast Then & Now
By Radhika Menon
Get Even More From Bustle — Sign Up For The Newsletter