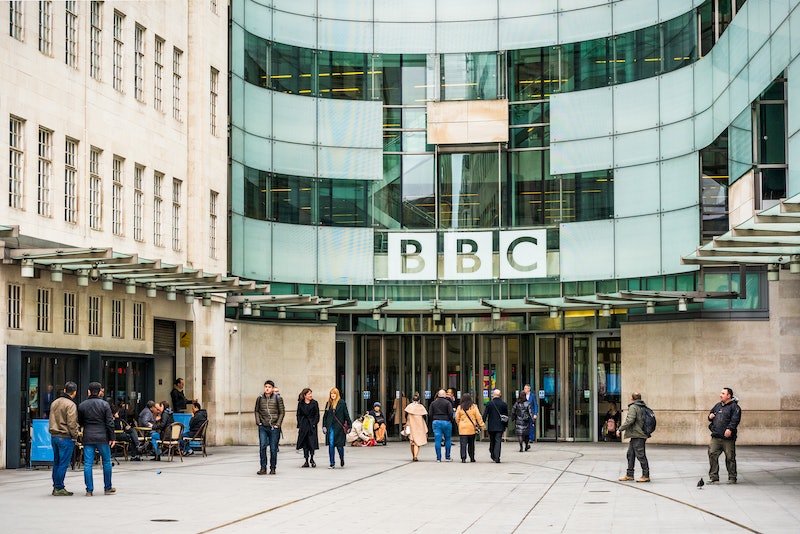 It was announced today that the BBC will increase its TV diversity by committing £100m over a three year period, BBC News reports. Starting from April 2021, 20% of off-screen talent "must come from under-represented groups." This mandatory target includes "those with a disability or from BAME (Black, Asian, and minority ethnic) or disadvantaged socio-economic backgrounds."

This follows initiatives announced by the BBC's Director of Creative Diversity June Sarpong, which included "establishing guidance and tools" to help ensure diversity across the broadcaster, and a "framework for auditing, setting targets and evaluating results within production" to meet diversity and inclusion policies, as detailed in a statement sent to Bustle.

As well as these initiatives and the new mandatory target, programmes will be required to meet two of the following three qualifications to make it to air:

More plans will be set out "in other production areas in the coming weeks," according to the broadcaster.

"The senseless killing of George Floyd — and what it tells us about the stain of systemic racism — has had a profound impact on all of us," BBC Director General Tony Hall said in the statement. "It's made us question ourselves about what more we can do to help tackle racism — and drive inclusion within our generation and in society as a whole." Hall continued:

"This is our response — it's going to drive change in what we make and who makes it. It's a big leap forward — and we'll have more to announce in the coming weeks."

This news comes after an open letter was published by some of the UK's biggest TV & film stars demanding more diversity in the entertainment industry.

The move also comes as a response to actions taken by director Steve McQueen. The BBC's director of content, Charlotte Moore, has revealed that McQueen challenged her and the BBC to "set meaningful targets and take proper action" last year during filming for his upcoming series, Small Axe. "He was right," said Moore. "Today's announcement represents a truly transformational commitment to both on and off screen representation. Concrete, tangible action is the only way we can bring about real sustainable change."

In recent op-ed for The Observer, McQueen spoke about the lack of diversity in British TV and film, stating: "The whole culture of the industry has to change," McQueen wrote. "They need to start reflecting the diversity of the UK, not just in front of the camera, but behind it. Every British production should have a quota in place for actors and crew.

"We need to put an infrastructure in place where people from the BAME community, who make up around 14% of the population, have access to jobs, have access to training and apprenticeship schemes and can further their careers."