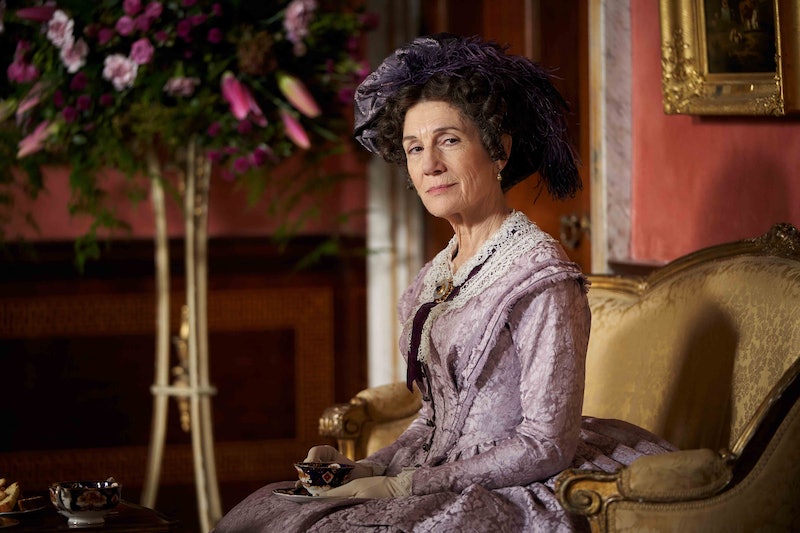 Step aside Crawleys, because the Belgravia trailer is bringing a new aristocratic family to town. The limited series from Julian Fellowes, the man behind Downton Abbey, focuses on the upper echelon of London society in the 19th Century and drops on Epix in 2020 — think Downton but in the hustle and bustle of the big city. The new drama is also based on Fellowes' book of the same name, so it's not that surprising to see that Belgravia is pretty much Downton Abbey 2.0.

The trailer teases a lot of drama, including one massive secret. As Anne Trenchard (Tamsin Greig from Episodes) declares, "We chose a life of lies. Now those lies have returned to haunt us." Anne is referring to a secret she and her husband, James Trenchard (played by Philip Glenister), have been keeping. Anne ponders in the trailer, "Do we have the right to hide from her that she has a grandson?" James later replies about the lie they've been telling for 25 years, "He's been told his father died in battle and his mother in childbirth, all of which is true."

According to Belgravia's description, upon the Trenchards accepting an invitation to Duchess of Richmond's "legendary ball" on the eve of the Battle of Waterloo, a series of events are set in motion "that will have consequences for decades to come as secrets unravel behind the porticoed doors of London’s grandest neighborhoods."

In addition to the familiar piano theme and the family scandals, Downton Abbey fans will also recognize a particular face in the trailer. Harriet Walter might play Caroline, Countess of Brockenhurst, in Belgravia, but she also played Lady Shackleton in Downton. Lady Shackleton eventually became Lady Mary's family, after she married Henry Talbot (Matthew Goode) and Walter appeared in a total of four Downton episodes over the course of the series.

As for the rest of Belgravia's cast, Alice Eve (Star Trek Into Darkness), Tara Fitzgerald (Game of Thrones), Tom Wilkinson (Michael Clayton), James Fleet (Four Weddings and a Funeral), and Ella Purnell (Sweetbitter), among many others, also star.

It might only be a month since the Downton Abbey movie hit theaters, but for fans already missing the Crawleys, Belgravia might just be exactly what they need.

More like this
'Succession' Season 4 Will Be An "Absolute Banger" According To Cousin Greg
By Bustle Staff
Everything To Know About The 'Daisy Jones & The Six' TV Series
By Maxine Harrison and Brad Witter
'The Crown' Season 6 Has Suspended Filming "Out Of Respect" For The Queen's Death
By Bustle Staff
Here’s What Happens To Bill & Frank In 'The Last Of Us' Video Game
By Brad Witter
Get Even More From Bustle — Sign Up For The Newsletter
From hair trends to relationship advice, our daily newsletter has everything you need to sound like a person who’s on TikTok, even if you aren’t.