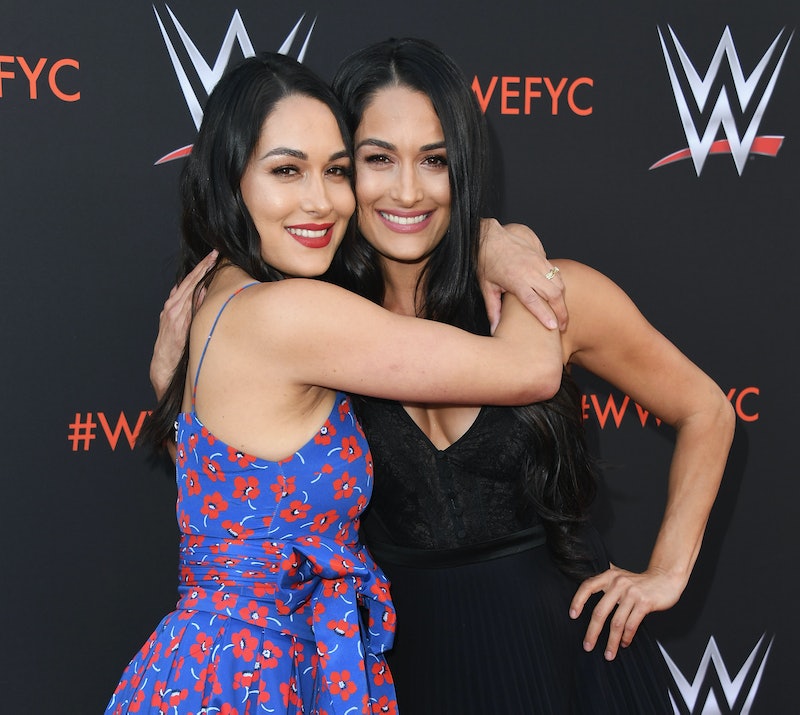 America's favorite set of twins (aka Nikki and Brie Bella) may be WWE Superstars (and total badasses, may I add), but when it comes down to it, they *really* are just like us. Bustle sat down with The Bella Twins to chat about all things confidence, self care, and hard work (not to mention, some great advice on staying motivated to achieve your dreams, but more on that later).

The dynamic duo have been in the ring for nearly 12 years, and they don't plan on slowing down their grind anytime soon. And through all those years training side by side, the twins have truly been through thick and thin together. Despite everything, it's brought them even closer. The two have seen each other at their most vulnerable: Brie watched as Nikki fought her way through terrible neck pain and surgery, while Nikki saw Brie taking a step back from the ring during her pregnancy with her now 1-year-old daughter, Birdie.

When asked about how they work so well together, Nikki says that it's simply a one-of-a-kind twin bond. "We can be pretty ruthless, like, to each other, and then we can make up within minutes, and people are like, 'How are you even hanging out right now?'" Nikki tells Bustle.

The event was the first of its kind, and it was extra special for the Bella Twins, who have been with WWE for over a decade. As of now, Evolution is the only WWE pay-per-view-special to have featured an all-women lineup, including The Bella Twins, Charlotte Flair, Ronda Rousey, Sasha Banks, and more superstars.

The Bella Twins tell Bustle that they are proud to be at the forefront of the female evolution in wrestling, and enjoy helping pave the road for the next generation of superstar athletes.

"I think it's very important as a company that we join this movement, and not only that, but that we show our youth that we believe in equality; that women are just as important as men," Nikki tells Bustle. "And that's what I love so much about Evolution. ... It's not about being better than our male superstars, it's about being equal — having equal time on TV, having just as great stories to tell."

However, despite their busy schedules, the two are always sure to spend their spare time practicing some much-needed self care. According to Brie, the two rely on the support from their life coaches to help keep them balanced and organized.

But even if you don't have a life coach, Nikki and Brie say you can still work on practicing self-care one step at a time each day. "Giving yourself every day, even if it's 10 minutes of that quiet meditation time," Nikki says. "And have meditation be what you want — just sit in silence, maybe listen to really pretty music — but give yourself that time to just disconnect,"

And when it comes to hitting the gym, Brie says there's no better way to let off steam. "We love working out," Brie tells Bustle. "We feel like we release a lot mentally, but at the same time, strengthening ourselves and feeling strong makes you mentally feel strong as well."

And although it may seem that the Bella Twins have killer self-esteem, it wasn't always this way. In fact, the WWE Superstars struggled with confidence issues for decades. When asked what advice they'd give their younger selves, Brie says she wishes she would have found her confidence sooner. "I think it really took me [a while] to get how I got into my 30s to really find that confidence and the confidence I wish I had in my younger 20s," Brie says. "But now, to look in the mirror and truly love myself and to know that I am great, and I can be anything I wanna be, and so, I would tell myself to learn that earlier on."

Nikki's advice is equally as motivating, and she encourages young women to believe in their dreams, no matter how hard the hustle may be or how difficult it may seem. "On this tough road and tough journey, just keep smiling and loving everything you do because happiness is the true success."