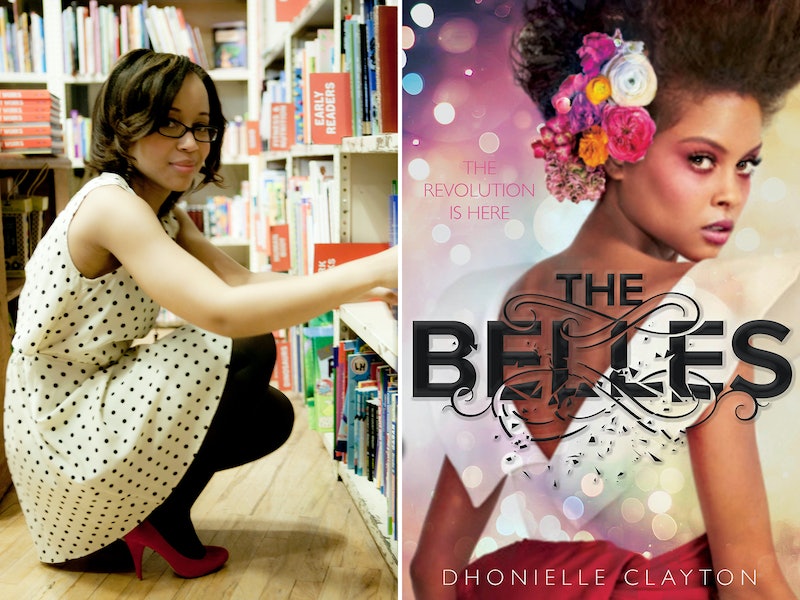 In the acknowledgments to The Belles, author Dhonielle Clayton writes, "This book has haunted me for almost 20 years."

"Haunt" is just the right word to describe Clayton's powerful YA fantasy, which takes a deep dive into the dark side of beauty, exposing the monster behind the mask of pretty dresses, perfect bodies, and glowing skin. It's a story that not only comes straight from Clayton's own experiences, but one that will be familiar to anyone who has ever fallen victim to society's often unreachable and unrealistic beauty standards.

"The Belles came out [of] how I felt about my body during adolescence," Clayton tells Bustle. "When I was a pimply, puffy-haired preteen in the mid-1990s, I overheard a conversation at my local suburban mall between several men about their respective girlfriends’ bodies. They were thumbing through a popular magazine as they discussed how much better their girlfriends might look if they had longer and leaner legs, bigger breasts, etc., and comparing them to celebrity women. This conversation changed my view about my own body, and the bodies of other women. I started to obsess about the relationship between beauty and power and attraction."

That connection between beauty and power is on full display in The Belles, which follows Camellia Beauregard, a Belle who lives in the opulent world of Orléans. The revered Belles control Beauty, and the people of Orléans covet Beauty above all else. But it’s not enough for Camellia to be just a Belle. She wants to be the favorite — the Belle chosen by the Queen of Orléans to live in the royal palace and serve the royal family. But once Camellia and her Belle sisters arrive at court, it becomes clear that being the favorite is not everything she always dreamed it would be. The palace hides dark secrets, and Camellia soon learns that the very essence of her existence is a lie — that her powers are far greater, and could be more dangerous, than she ever imagined.

As Clayton dives into the dark underbelly of Orléans, the aspects of beauty she explores are at once so familiar to own own world, and so fantastical as to be almost unrecognizable. It's a dichotomy that she purposefully wanted to put front and center.

The Belles by Dhonielle Clayton, $12, Amazon

"I started by pouring over my middle school journals and taking notes on the things that bothered me when I was 11 and 12 years old. Then, I interviewed a lot of my friends about their bodies," she says. "I was surprised by how many people are deeply dissatisfied by the body they have, and if given the chance to change it radically and magically, how many would jump at the opportunity. I decided not to do a deep dive into some of the issues in our real-world beauty culture — like Eurocentric beauty standards and the desire for thinness and whiteness — because I did not want to alienate those of us who already battle this in our actual lives outside of the fictional universe. I wanted to have these elements shift and flow in the narrative, so we can see how silly these things are, and how real they feel as they become part of systems of power."

But beauty is not the only dangerous desire that the characters in The Belles come across. Ambition is a driving force for Camellia in her singular pursuit of becoming the favorite, but the same goes for and most of the women in positions of power in Orléans. From the Princess Sophia's obsession with being the most beautiful to leader of the Belles, Madame Du Barry, whose position of power is of the utmost importance to her, we see a world full of women who are led by their need for respect and prominence.

"I wanted to have these elements shift and flow in the narrative, so we can see how silly these things are, and how real they feel as they become part of systems of power."

"I write about the things that bother me. This methodology helps me stay anchored into a story when the writing gets tough. I am endlessly fascinated with ambitious women that are willing to do whatever it takes to reach their goals. Ambition feeds my soul and makes me excited about getting up each day," Clayton says. "But I am acutely aware of the dark side of ambition. My own ambitions have sometimes derailed my health and my ability to maintain friendships. However, I can’t stop exploring what happens to women when they reach for power. It is a question that haunts me, so it will be something I continue to write about."

Readers first glimpse Clayton's fascination with ambition in her debut novel (co-written with Sona Charaipotra) Tiny Pretty Things, about a troupe of ballerinas who will do anything to make it to the top. But this topic takes on all new meaning in The Belles, which takes place in a world run entirely by powerful women.

"I write about the things that bother me. This methodology helps me stay anchored into a story when the writing gets tough."

"Secret: I love my villains more than my heroes," Clayton says. "Princess Sophia in The Belles is my favorite character and the one that has the most parts of me — the exaggerated version of the teenage me. My decision to write a female-dominated world came from the fact that when I receive a compliment from a woman about my outfit or makeup or look it has much more weight than from a man. I wanted to dig into that. Also, the [2016] election brought to light that we as women have skeletons in our closet and things to work out as a group. I wanted to be able to lean into the issues that women have in all-female spaces, and create something that allows us to air this out and confront what patriarchy and white feminism have done to us."

It's not a surprise that some of these real world concerns about the patriarchy and feminism would come into play in Clayton's fictional world. As the COO of We Need Diverse Books, Clayton has made a career out of her life's mission to bringdiverse children's and YA books to the masses, saying, Making sure every kid can walk into a bookstore or library and find a book that mirrors their experience is the gift I want to leave behind on this planet." But it is her role as a sensitivity reader that has made waves in the publishing world lately. In an industry where some still believe that sensitivity reads are censorship, Clayton has been an advocate for insuring that diverse books are authentic – even in her own writing.

"I wanted to be able to lean into the issues that women have in all-female spaces, and create something that allows us to air this out and confront what patriarchy and white feminism have done to us."

"Sensitivity reads — or authenticity checks as I like to call them — are part of my own writing process, and something I haven’t always gotten right, Clayton says. "In The Belles, I had eight readers look for various issues in the text surrounding bodies and identity. The subject matter opens a difficult conversation about beauty standards and the commodification of women’s bodies. My readers imparted valuable feedback that helped give my world a layer of added authenticity, and noted mistakes I’d made, leading to harmful representation. I am indebted to all those who have given me their expertise."

"The subject matter opens a difficult conversation about beauty standards and the commodification of women’s bodies. My readers imparted valuable feedback that helped give my world a layer of added authenticity, and noted mistakes I’d made..."

And that's part of the reason why The Belles feels so right now. In a moment in our own culture when women are making their voices louder than ever before and fighting back against the way things have always been, Clayton has created a fantasy world in which its female characters are doing the same — putting themselves on the line to change their world.

"I feel like this is the right time to publish The Belles because we’re at an interesting precipice in all industries about the role of women, their looks and sexuality, and how that interacts with misogyny and rape culture. The future is female, and The Belles is female-centered, digging into issues we have in our community."