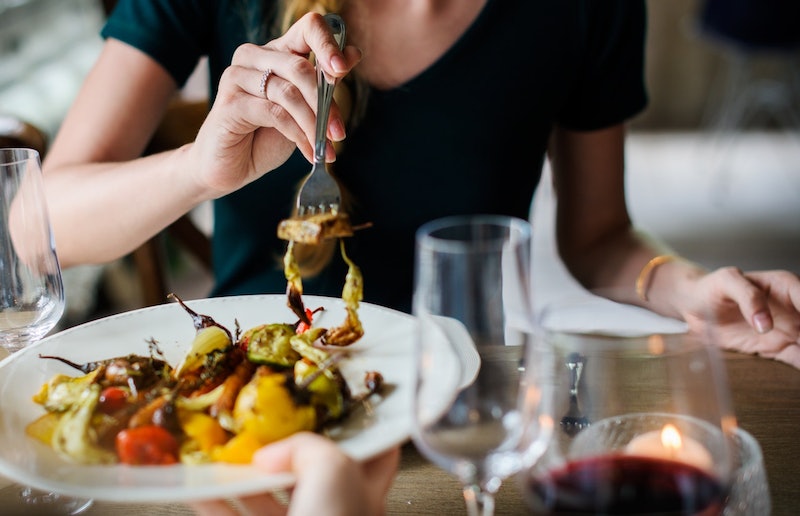 In a society that's become virtually cashless, dealing with splitting a check when on a date or out with friends can be kind of a pain. Fortunately, there are some alternatives to splitting the check that actually work, and won't cause you to hyperventilate. I was a bartender in college, so I always had a sock drawer stuffed with bills. When I got my first writing job, I went from using cash to pay for everything to using a credit or debit card exclusively since my writing job insisted on paying me with a check — you know, like how most people get paid.

I so rarely have cash these days that I am that annoying person who sometimes pays the valet with a roll of quarters. I was once at a place that did not accept cards, but said they would take a check. Um, yeah, I didn't have that on me either. Do people still actually carry their checkbooks around?

In 2017, most people pay for dinner with their credit or debit card, which can turn into a debacle if you're out to dinner with a bunch of people who don't want to do math, and the restaurant doesn't allow separate checks. Some places don't allow large parties to split checks because it can be kind of a nightmare for a busy server. And, by "kind of," I mean complete. As someone who worked as a server and bartender all through high school and college, difficult check splitting is often a reason servers have to scream into a bar rag to muffle their cries of frustration.

"The weird thing about splitting the check is that no one seems to know just what the correct protocol is, or what is/is not easiest for servers and customers," C.A. Pinkham wrote on Kitchenette for Jezebel. "I've actually had people argue with me over what's easiest for me, insisting that we do it in the most convoluted way possible for BOTH of us 'to make things easy for you.' Dealing with check splitting has taught me, over and over and over, that even well-meaning people are often really, really dumb."

Decide How You'll Pay Ahead of Time

If you're going out with a large group, and drinks are involved, check confusion is likely to ensue. One alternative to getting separate checks is to nominate one person to actually pay the bill, then have everyone else pay that person using a payment app. If you go out with the same crowd often, you can all take turns being the bill payer.

Then, each person can use an app like Paypal, Venmo, Circle Pay, Apple Pay, or Zelle to pay the person who paid the bill. Try to avoid confusion by choosing a single app that you'll all use. If someone forgets to pay, you can send them a reminder via the app.

Take Turns Treating Each Other

If you have a friend, or partner, who you go out with often, take turns picking up the tab instead of splitting the bill. If you spend a lot of time eating and drinking with one person, even if the bill is not equal every time, it usually evens out eventually. This is what my roommate and I do, and if there is a significant difference in the bill we use a mobile app to pay each other the difference.

"If you don’t have cash on hand, Sarah Berger, millennial money blogger at Bankrate.com, recommends having one person pick up the entire check. They can maximize their card's rewards points, and everyone else can pay them back using an app like Venmo," USA TODAY reported.

I actually don't mind doing this because I do collect airline miles on my credit cards, which usually gives me at least two free plane tickets a year. This is a way to not only make everyone's life easier, but to get more mileage out a rewards credit card as well.

Split The Night, Not The Bill

If you are doing dinner and drinks, or dinner and a movie, with your bestie, another way to make paying for the evening easier is to set a budget ahead of time and have one person pick up dinner and the other person pick up drinks when you head to the club or bar, or pay for the movie, which is equally as expensive as dinner these days.

If you are on a strict budget, and don't feel comfortable with all of the bill-splitting gymnastics (remember that Friends episode about splitting the bill?), consider bringing cash to pay for exactly what you ordered. You can give cash to someone else paying with a card (don't forget the tip), and still keep things super simple.