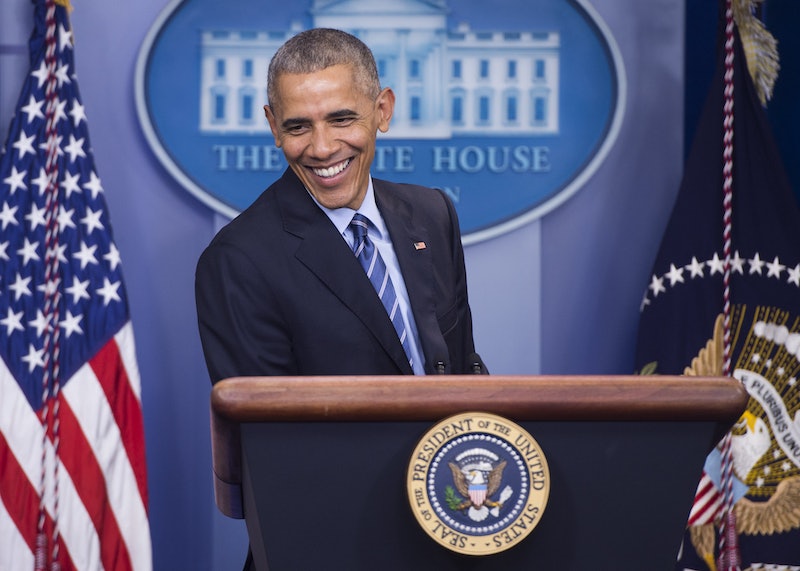 In August, Barack Obama sealed his reputation as the most feminist president that we've ever had when he penned an essay on his wife, daughters and feminism for Glamour. Although the 1,500-word essay certainly the most extensive public discussion that that Obama has had on feminism, it wasn't the first time that Obama had declared his belief that women and men should be equal. Here are the best feminist quotes from Obama's time in office.

As Brenda Weber, a gender studies professor at Indiana University, told The New York Times in August, the president's clear declaration as a feminist was a critical gesture from a man with such influence. "Those are all pretty radical statements in terms of a politician at that level of influence," Weber said of the president's essay in Glamour.

So I'm glad that the president laid bare for the nation that he was, indeed, a feminist (and it only took him three years after Beyoncé!). As Weber notes, it's important for him to set such an example. But Obama hasn't been shy about sharing his feminist ideologies. Here are just a few of the best examples from his eight years in the White House.

1. "I may be a little grayer than I was eight years ago, but this is what a feminist looks like."

Shortly after he endorsed Hillary Clinton for president, Obama delivered one of his most feminist speeches to 5,000 gathered at the White House summit on women.

2. "We must carry forward the work of the women who came before us and ensure our daughters have no limits on their dreams, no obstacle to their achievements and no remaining ceilings to shatter."

Ahead of the 100th anniversary of International Women's Day in 2011, the president issued a proclamation recommitting his administration to helping women.

3. "I refuse to stop fighting now — for the sake of my daughters and yours, we must do better to make sure women are respected and treated equally."

Obama issued this statement on the 95th anniversary of the 19th Amendment in 2015.

4. "This Congress still needs to pass a law that makes sure a woman is paid the same as a man for doing the same work. Really. It's 2015."

Obama dropped some truths at the 2015 State of the Union address.

5. "A woman deserves equal pay for equal work. She deserves to have a baby without sacrificing her job. A mother deserves a day off to care for a sick child or sick parent without running into hardship —  and you know what, a father does, too. It’s time to do away with workplace policies that belong in a Mad Men episode."

Obama was apparently fond of dropping feminist nuggets of wisdom during the State of the Union, this one in 2014. Bonus points for the pop culture reference.

6. "And yes, it’s important that their dad is a feminist, because now that’s what they expect of all men."

C'mon, I couldn't do a Barack Obama feminist quote list and leave out that Glamour essay. It's so good, y'all.

7. "What I think these comments do underscore is why we shouldn't have a bunch of politicians, the majority of whom are men, making health care decisions on behalf of women."

In case you didn't already know you were going to miss Obama, just reread these feminist quotes. Let's hope he isn't the last feminist president that we see in our lifetimes.