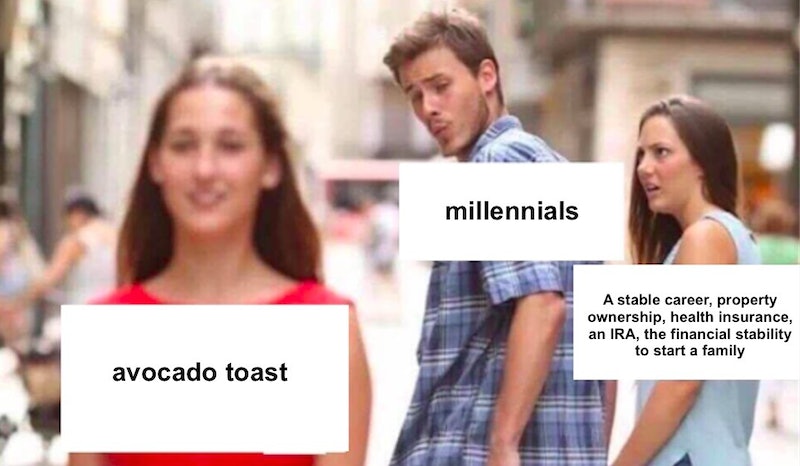 It’s that time again: A new meme has risen from the depths of the internet, and it’s honestly too real. What’s more, as the best “Disloyal Man” meme tweets demonstrate, this one looks like it’s going to have some real staying power. According to Mashable, it centers around a stock photo from Shutterstock titled “Disloyal Man Walking With his Girlfriend And Looking Amazed At Another Seductive Girl” — but although the situation depicted in the photo is incredibly literal, the good people of the internet have shown that it’s applicable to a wide variety of other, much more conceptual situations and ideas.

Although it’s also been referred to as the “Girlfriend vs. The Other Girl” meme and the “Jealous Girlfriend” meme, I prefer “Disloyal Man,” because let’s face it: The women aren't the problem here. It’s the dude. Yes, you are allowed to find other people attractive even when you’re in a relationship —in fact, it’s bound to happen, because people aren’t robots — but unless you’ve explicitly laid out rules in your relationship that all parties agree on about acting on those attractions, generally, it’s not real kind to your partner(s) to visibly lust after other people when you’re literally walking right next to them.

That guy? He is a cad. And honestly, the girlfriend should probably kick him to the curb and warn the other woman about how much of a cad he is, while the other woman should NOPE right the heck out of there and carry on.

Here is another alternative name I support:

Alas, though, it turns out there’s actually a whole story here, and it is not the one I wanted to see. As Parker Molloy pointed out, more images in the series show a proposal, a marriage, an affair, a lovechild, a betrayal (multiple betrayals,really), and finally, this:

But at least it ends there. SERVES YOU RIGHT, DUDE.

That said, though, when used well, “Disloyal Man” is a laugh-out-loud funny meme; it just works so well as a metaphor, which is really the only way “cheating on bae = cool” works for me as a description of it. So, on that note, here are the absolute best “Disloyal Man” memes currently making their way around Twitter:

More like this
I Spent 2 Years Trying TikTok’s Dating Advice
By Kailynn Johnson
Ashamed Of Your Screen Time Stats? Here's How To Change That
By Alexis Morillo
Learning To Love, Not Judge, The Lunchbox Wives Of TikTok
By Esther Zuckerman
How To Turn Off TikTok Profile Views So You Can Stalk Other Accounts In Secret
By Alexis Morillo
Get Even More From Bustle — Sign Up For The Newsletter
From hair trends to relationship advice, our daily newsletter has everything you need to sound like a person who’s on TikTok, even if you aren’t.