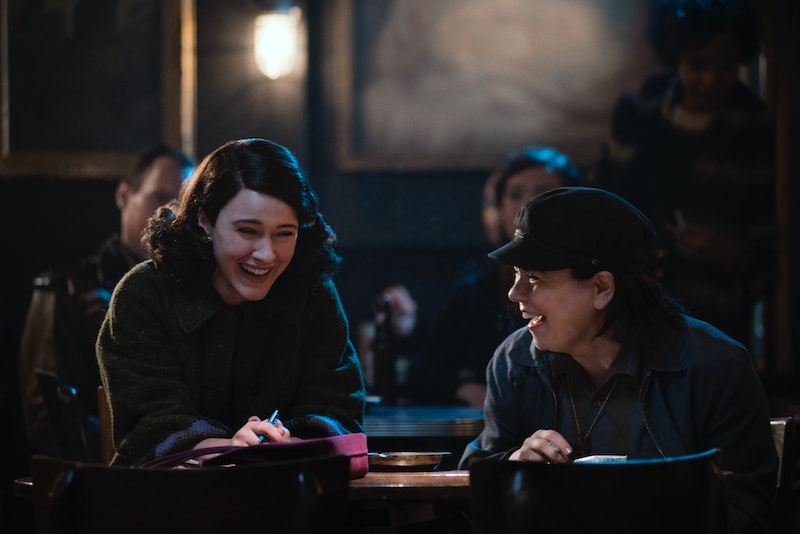 Not all of Midge's jokes are one-liners. In fact, most of them aren't. As she explains in Season 2, she doesn't "really do" jokes — she's more of a stream-of-consciousness kind of comic, "observational humor," she calls it. Take, for example, Midge's on-stage rant about Sophie Lennon, and how the esteemed comedienne told her that in order to succeed in comedy, she had to create an unattractive, asexual persona for herself.

That being said, Midge still knows how to deliver a punchline. Here are some of her best from Seasons 1 and 2.

"You’ve heard about the shorthand girls? These are girls whose skill in life is not writing full sentences."

There are many, many hilarious quips that Midge makes at Penny's expense.

"I wanted to make sure there were great dancers at our wedding, so I hired some chorus boys from the Pajama Game to come and dance. Two of them did 'Steam Heat.' Notice the great hat work."

Then, when they start dancing with bottles, Midge remarks "someone should do something with that" — implying that the iconic wedding dance from Fiddler On The Roof was invented at her reception.

Yet, do we ever see Midge's kids on this show? Do they have names? (They do, but, you know, just roll with the joke.)

"Life isn’t fair. It’s hard and cruel. You have to pick your friends as if there’s a war going on. You want a husband who’ll take a bullet for you, not one who points to the attic and says, 'They’re up there.'"

The show is set only a decade or so after the Holocaust, so they've earned these jokes.

"Me, personally, I was never great at gift-giving. Maybe it’s because I never got to celebrate Christmas. I got Hanukkah. Doesn’t exactly prepare you the same way. For Christmas, a gentile would get a bike as a reminder that their parents love them. For Hanukkah, we would get socks as a reminder that we were persecuted.'

Just in time for the holidays!

On Living In New York

"It’s downtown. If you have underwear on, you’re overdressed."

"The only thing I feel prepared to take on, right now, this very minute, is those f*cking losers at the bar. Just standing there, waiting for me to bomb. It's midnight on a Tuesday and the highlight of their evening is the possibility of seeing a chick fail. Am I supposed to find them intimidating? Because all I see is a lineup of men who had to go into comedy just to get laid."

If thought Midge couldn't "hang with the boys," you don't know Midge Maisel. After spending a night having last-minute male comics repeatedly bump her set time, she roasts each of them — and hilariously.

"Does the time lady count off seconds while she's having sex?Really, no man wants to go through that. Women, most men we sleep with? They go off before the beep, you know what I'm saying?"

Yeah, we know what you're saying.

The To Kill A Mockingbird Homage

Season 2, Episode 4 opens with a shot-for-shot remake of this scene from the 1962 film — with a comical twist from Abe (who is not wearing his comical socks).

You know the saying, "Walk a mile in a man's shoes?" Midge asks at the open of Season 2, Episode 8. "Well, I took it to heart, put on a pair of my husband's shoes, and my God were they comfortable. I get it now, why men rule the world: no high heels."