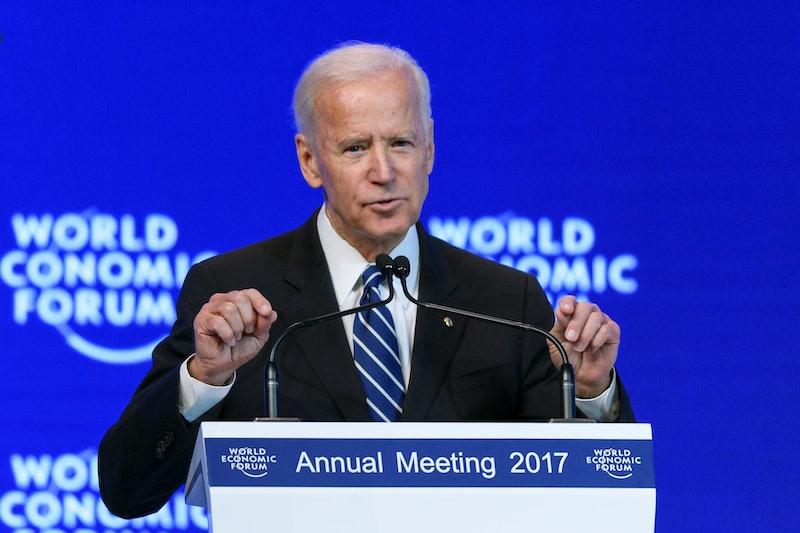 The final days of the Obama administration have been difficult for millions across the country with deep concerns about the next president, but the nation's leaders have offered some incredible advice over the last few weeks about how to move forward without them. The best line from Joe Biden's farewell speech is a powerful plea to reject the inherent human instinct to protect only ourselves in this time of global uncertainty, and it's one everyone would do well to internalize and utilize often.

"The impulse to hunker down, shut the gates, build walls, and exit at this moment is precisely the wrong answer," Biden said Wednesday at the World Economic Forum in Davos, Switzerland. "It offers a false sense of security in an interconnected world."

During Biden's lifetime, and even during his tenure as vice president, the world has experienced some of the most dramatic change in all of human history. The Big Bang of the Internet and the economic globalization that came with it radically shifted how nations relate to one another, and even decades later, the world is still trying to figure out how to live in this seemingly smaller space together.

One reaction, as has been seen in many iterations across the globe — like Brexit, Trumpism, and the European reaction to the Syrian refugee crisis — is to withdraw from the world and its problems in the hopes of avoiding them altogether. Biden reminds everyone that a return to the isolationism and nationalistic politics that dominated the early 20th Century is both ineffective and immoral. Every country has a duty to overcome these baser instincts and help the entire world rise together.

The speech was an interesting one to be Biden's last major address, since it represented a return to his legislative roots rather than a summation of his time as VP. As a young Senator, Biden was a leader in foreign relations, using his near-universal likability to bridge gaps between nations and political parties. However, most of his vice presidency was dedicated to a domestic agenda, working on major initiatives to support gun control, sexual assault victims, and cancer research.

Yet Biden, showing his impressively well-rounded political career, spoke of global economy and security with all the wisdom befitting his position and experience. His inspirational words are a sign of the strength of his leadership, and everyone should keep them in mind over the next four years.

Although this may be Biden's last major speech as vice president, it's more than likely not going to be his last in the public eye. Biden is setting himself up for a post-White House career in cancer research, and he'll hopefully be making plenty of powerful speeches just like this one, encouraging the world to work together to solve its problems. Biden has always been a motiving and inspirational leader, and he's the perfect person to show the world how not to back down when things get tough.