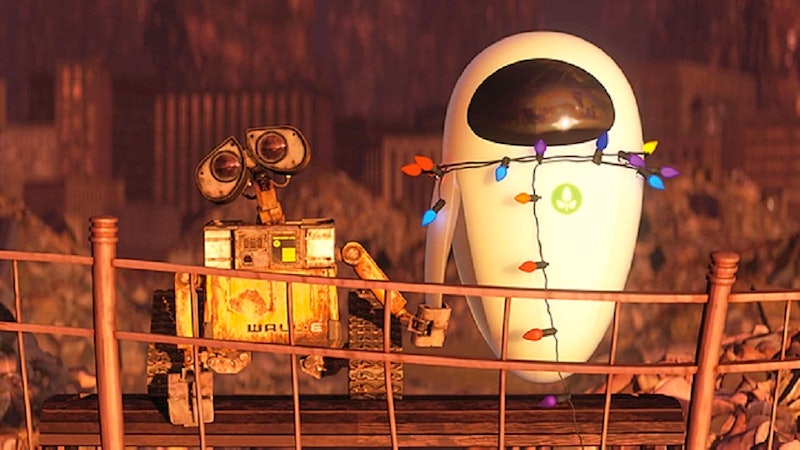 If you happen to be something of an obsessive when it comes to movies, then you may well already be fascinated by the endless theories regarding the possibility that all of the Pixar movies are connected. Before now, these theories have only ever been suggested and shared by enthusiastic fans. However, a video shared on Jan. 15 by the official Toy Story Facebook page, seems to suggest that Disney Pixar is confirming the interconnected universe theories. And prepare yourselves, because this little beauty is so detailed that it's going to genuinely blow you away.

Showing a selection of easter eggs from Pixar movies and how they connect from one movie to the next, the video is a stunning reminder of how ridiculously detailed each movie truly is. We see, for instance, how Chef Skinner's scooter from Ratatouille becomes decayed in a scrap heap in Wall-E, how Boo from Monsters, Inc. has a Jessie doll from Toy Story in her bedroom and even how Lotso from Toy Story 3 shows up in a little girl's bedroom in Up.

For fans of Pixar movies, the video is a lot of fun. And for seasoned obsessives who subscribe to the idea that all of the Pixar universe movies are connected, the video isn't just fun, but it also provides a visual confirmation for many of their theories. But what theories are they? Well, watch the video below and then let's get into it.

Theory #1: Boo From Monsters, Inc. Is Actually The Witch From Brave

Honestly, there's a ton of fan made information out there about why Monsters, Inc. is the key to the Pixar universe, none of which can be succinctly summed up within a neat paragraph. But the theory that Boo is the witch from Brave is perhaps the most vital part of it.

There's the clear wood carving of Sulley that can be seen in Brave (above) which lends credence to this theory, but there's also the idea that the witch (or Boo) understands the magical, and potentially time traveling, properties of wood. And where would she get such an idea from? Perhaps from the discovery of some magical, wooden doors when she was a child that gave her access to a strange new world.

Theory #2: The Pixar Universe Sets Movies Within A Fixed Timeline

Which brings us to this theory, which is sort of related to the first. As suggested by Jon Negroni, the inventor of the Pixar theory, there's an actual Pixar theory timeline that helps to explain some of the events of the movies. Brave, for example, is at the forefront of the timeline because it's set in the 14th or 15th Century.

From there, however, we see the progression of inanimate objects becoming sentient beings in Toy Story (set in the late '90s) until even machines become just as full of life in Cars (set around 2100). We also see hints of environmental abuse in Finding Nemo (set in the early '00s), which becomes the pollution which makes the world uninhabitable in Wall-E (set around 2800).

But how do we know when many of these movies are set? Because of how the easter eggs date them. Like the one at the start of the video that shows Riley from Inside Out staring into a fish tank in Finding Dory, or even how background props from other films have aged in those set in the future.

Theory #3: Buy 'N' Large Causes The Demise Of The Planet

And that pollution that eventually destroys the planet? There's a theory that Buy 'N' Large, the fictional Pixar corporation that appears in most of their movies is the one responsible for it all. Not only are Buy 'N' Large the machine controlled corporation who force Carl to float his house away to safety in Up, but they're also notably responsible for keeping humans away from the Earth in Wall-E.

Theory #4: The Events From The Incredibles Could Have Resulted In The Sentience Of Objects In Further Pixar Movies

Does everyone remember the Omnidroid from The Incredibles and how it was a sentient robot intent on attacking humanity? So far, so very Buy 'N Large. With the film being set sometime around the '50s or '60s, some fans believe that it was super villain Syndrome and his inventions that may have been responsible for heralding an age of sentience in inanimate objects and machines as seen in many of Pixar's movies.

Theory #5: Randall Is The Monster Of Toy Story's Andy

As seen in the Pixar easter egg video, when Jessie is seen on Boo's bedroom floor, there's a definite Toy Story and Monsters, Inc. connection that goes far beyond simple easter eggs. And this particular theory seems to suggest that the villainous Randall is Andy's monster from Toy Story.

The main bit of evidence can be found in the training sequence at the start of Monsters, Inc., in which Randall practices disappearing into a very familiar wallpaper background. Yep, it's the design from Andy's bedroom. Case closed.

And these five theories are only touching the surface of the overall grand theory that the Pixar universe is totally connected. But, as the video that Disney Pixar shared proves, the studio is having a lot of fun leaving a trail of easter eggs for us all to scratch our heads and get excited about. And, as a fan, I'm having a lot of fun watching them.