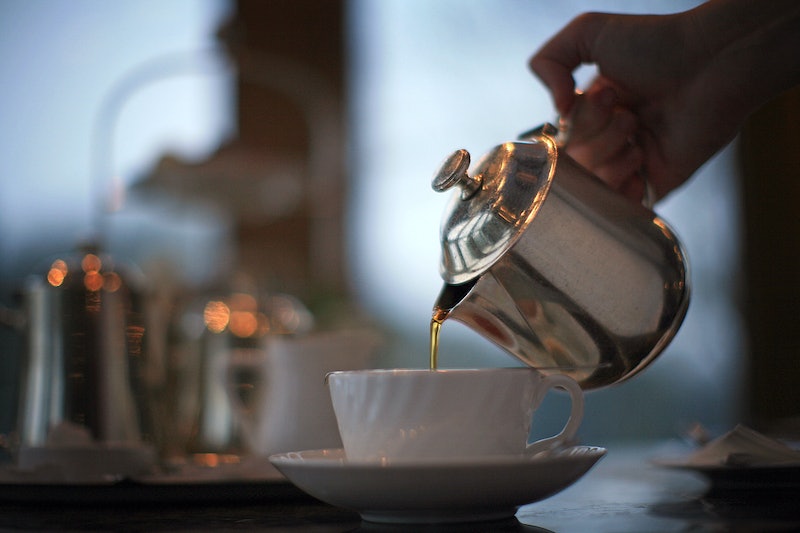 Anxiety is no joke, as anyone who has ever suffered from it will know. Though symptoms vary, anxiety can leave you feeling sick, dizzy, restless, and with a constant sense of dread, according to the NHS. So if drinking tea for anxiety is an option, I'm happy to look into it.

We know that anxiety can be caused by anything from stress to genetic predisposition, according to Mind, and the Mental Health Foundation states that there were 8.2 million cases of anxiety in the UK in 2013, with women almost twice as likely to suffer from it as men. Typical treatments include meditation, exercise, antidepressants, and techniques such as CBT, according to Anxiety UK, though there may be a new option on the block.

In fact, studies show that certain types of tea can be used to help anxiety, acting as a self-soothing method for when you're home alone and it strikes. They don't need a prescription, so they can be purchased quickly, and they're definitely cheaper than therapy. Most of them are suitable for long-term use, but you should check with a doctor if you feel you're becoming reliant on any herbal remedy, and tea shouldn't be used in place of prescribed medication without your doctor's approval.

Check out the top five teas to help you cope with anxiety.

This tea is a powerhouse. Naturally low in caffeine and very relaxing, it helps you sleep, and, according to a 2016 study from Phytomedicine, chamomile tea "significantly [reduces] moderate-to-severe generalised anxiety disorder symptoms."

You can either make chamomile tea with fresh chamomile flowers in an infuser teapot, or use a teabag — my personal favourite is good old Twinings. Try having some right before bed.

This tea is used in the practise of Ayurvedic medicine and has traditionally been used in eastern healing methods. It is said to help to maintain balance and reduce cortisol levels, according to Psychology Today. Cortisol is the "stress hormone" produced by the adrenal glands and acts as the fight or flight stimulant. When elevated without a clear stimulus, it causes anxiety. One 2012 study in the Indian Journal of Psychological Medicine showed participants given ashwagandha rather than a placebo had 28% lower cortisol levels than the rest of the group.

There are a few ways to drink ashwagandha tea. Add one or two teaspoons of roots to boiling water, leave it to boil for 15 minutes, and then strain and enjoy. Alternatively, you could boil milk, ashwagandha, and honey for a sweeter concoction. In addition to buying a powder like the one above, you can get ashwagandha roots on Amazon.

This tea has been prescribed since the 4th century by people as esteemed as Hippocrates, so I think it's legit. It helps with insomnia, and also increases levels of gamma-aminobutyric acid (GABA), aka the neurotransmitter in the brain that helps with anxiety, according to natural medicine expert Dr. Axe. When women were given valerian root at a stressful time, they experienced less anxiety than those not given it, according to a study from the Global Journal of Health Science.

To make valerian tea at home, you first need to buy the dry roots. I get them from Whole Foods Online, because you can buy the roots in a range of package sizes. Allow one dry teaspoon of root per cup and remember to allow it to steep for 15 minutes for maximum benefit.

Passionflower contains chrysin, which helps with anxiety, as a double-blind study from the Tehran University of Medical Sciences showed. When patients were given it before they underwent surgery, they experienced less anxiety than those in a similar situation who were not given passionflower tea, according to findings from a study in Anesthesia and Analgesia.

I like the Twinings Superblend Tea, as it contains a delicious mixture of passionflower, vanilla, apple, and chamomile.

Lavender makes an appearance in every sleep expert's list of snooze-inducing remedies for good reason: it's incredibly soothing. A German study in Phytomedicine actually showed it to have similar effect to a commonly prescribed anxiety drug, Lorazepam, without the side effects. It may also alleviate headaches, which can be linked to anxiety, according to the Calm Clinic.

If you fancy giving lavender tea a go at home, add whole, dried lavender flowers to boiling water and allow to steep. Be sure to strain it before drinking, or you may find bits of lavender in your teeth for days. Breathe in as you sip, though — the scent is both calming and delicious.

So, put the kettle on. We in the UK know there are few things a cup of tea can't solve, and we're certainly willing to give it a go when it comes to anxiety.

This article was originally published on May 24, 2018