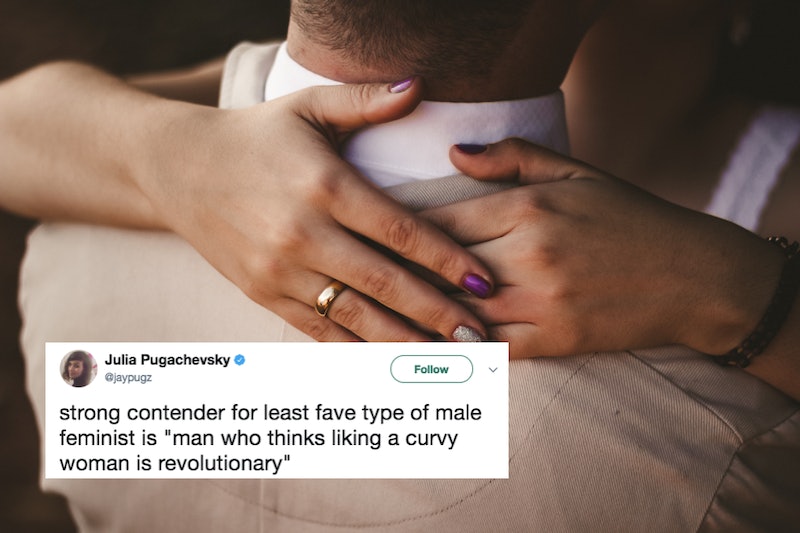 If you've been on Twitter at all in the past week, you're probably still reeling from the whiplash of watching Robbie Tripp go from rising relationship star to one of the most roasted men on the internet. After posting a picture of him and his wife, Sarah, with a lengthy caption celebrating her "curves," Robbie was briefly celebrated, then quickly criticized for his self-congratulatory tone. Twitter was quick to react, creating unforgettable responses that absolutely slammed his ode to his 'curvy wife'.

In his original post, Tripp wrote about his appreciation for his wife's body, and how he was mocked in the past for daring to find non-sample size women attractive.

"For me, there is nothing sexier than this woman right here: thick thighs, big booty, cute little side roll, etc. Her shape and size won't be the one featured on the cover of Cosmopolitan but it's the one featured in my life and in my heart," he wrote.

The post quickly went viral, with outlets like E! News, Perez Hilton, and HuffPost praising Robbie for his "beautiful" and "inspiring" words.

But Twitter giveth, and Twitter taketh away. While some celebrated Robbie, others panned him for objectifying his own wife, who he repeatedly calls "curvy" (despite the fact that she looks perfectly average), and for managing to twist the conversation about feminism and body positivity to make it about a straight, white man.

What's more, as people pored over Robbie and Sarah's social media presence, some extremely problematic tweets were brought to light, including ones that contained racist and transphobic jokes.

The controversy has highlighted just how counterproductive the self-congratulatory feminism of men in particular can be. Because in addition to objectifying his wife and putting down other women, Robbie's post plays into the narrative that for a woman to be worthy, men must find her attractive.

"Girls," he concluded, "don't ever fool yourself by thinking you have to fit a certain mold to be loved and appreciated. There is a guy out there who is going to celebrate you for exactly who you are, someone who will love you like I love my Sarah."

But body positivity is not about men finding "curvy" women attractive: it's about creating a society that is safe and accepting of all people, regardless of their body, gender, sexuality or race.

Until then, Twitter has spoken: Women and feminism will be fine without the self-congratulatory support of a man who dares to love his own beautiful wife. Luckily, we will always have the memes to remember this important time in culture with. See some of the best tweets roasting the 'curvy wife' guy below.