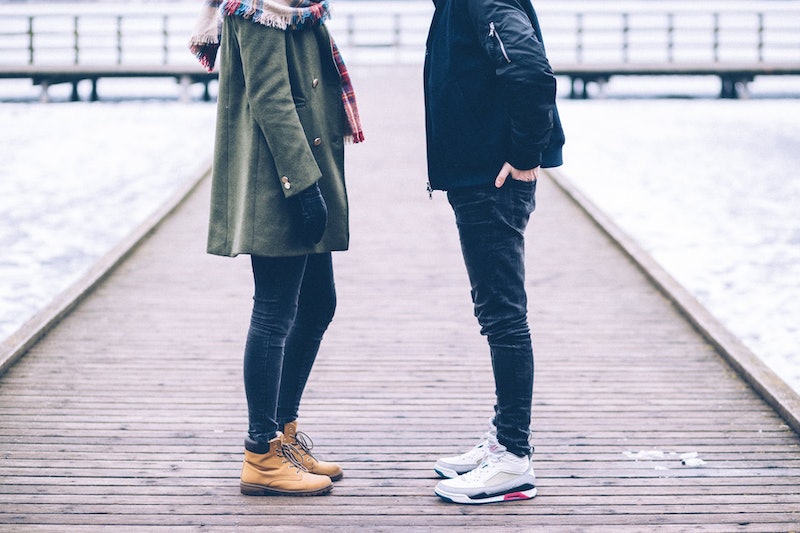 If you're in a heated argument, you might be thinking, "Oh, crap, there's no way of getting out of this one." Yet, even if things are getting out of hand, there's a way to regain control and ease the tension. Turns out, there are ways to stop an argument based on the zodiac sign, where you're giving your partner what he or she needs to feel less attacked and more comfortable. That way, he or she is likely to calm down and communicate in a more rational manner. (Which is better for both of you, both immediately and in the long-term.)

As a certified health coach, I work with clients on feeling more relaxed in their relationships, where they feel safe and open with their partners. Communication plays a major role here, as if you're not able to talk about things with a direct approach and a sense of clarity and compassion, you're likely to remain angry, hurt, and just heated and incompatible in general. (Meaning: your relationship might not survive if this becomes a pattern.) Good news is you're able to improve your communication skills by making it easier for your partner to speak to you about his or her feelings and to be more receptive to yours, as well. By channeling the stars and following the rules of the zodiac, you'll get an inside tip into how best to approach your partner amidst an argument. Thanks to astrologer Valerie Mesa, over email with Bustle, we've got some answers.

For Aries, give them time to say what's on their minds. "Let them speak their mind - they hate being interrupted," says Mesa. What's more, get it over with. "Most importantly, don’t delay the process. Aries moves full speed ahead," says Mesa.

For Taurus, you'll need to give some time and space when things get tense. "Be patient and don’t rush them," says Mesa. Plus, you want to validate them somehow, even if you don't think they're right. In Taurus' mind, "Taurus is never wrong, so don’t try to be right," Mesa says. This earth sign has a routine and you don’t want to try to break it, as well.

With Gemini, it might be a good idea to simply diffuse the tension by moving on to a different topic. (One less serious, perhaps.) "Change the subject. Give them space. Gemini is naturally fickle," says Mesa. However, that could be a good thing in this case, as it's easy to brush things off and not hold grudges.

Cancer is a bit needy here, so be prepared to cave a little. (As long as you want to keep your Cancer as your SO.) Apologize, says Mesa. It's simple, but works. "Acknowledge your faults and the situation. Show Cancer your sense of empathy and show them love," Mesa says.

Leo loves attention, so when it comes to arguments, they don't want to be seen as wrong or undervalued. A solution? Praise them. "Let them take charge of the conversation and follow their lead," says Mesa. In the process, focus on some positive qualities too, to recognize their greatness, especially when you're fighting over some negative ones.

When it comes to Virgo, they love solving problems and being a hero. So, be vulnerable and ask for help in improving your behaviors and finding common ground together. "Don’t try to fix what they’re already working on, either. Leave everything up to them," says Mesa. (This should work, but if it doesn't, jump in or re-evaluate your relationship.)

If you want to get Libra to back off amidst an argument, start to give them compliments and show that you value fairness, says Mesa. Don’t force them to make a decision right away, and try and remind them that it's OK to be upset and find a fair solution together. Plus, you might want to show up with flowers or a gift, says Mesa, as Libra loves feeling adored.

Don't give Scorpio anything but the truth. "Prove that you’re loyal and trust worthy, and never never never life," says Mesa. (Yes, it's that important.) What's more, don't gaze off and ignore what they're saying. "Pay attention to them when they’re speaking," says Mesa.

When it come to Sagittarius, you'll want to give them space and not come on too strong when fighting. "Don’t be clingy. Don’t try too hard," says Mesa. They need to come to you when ready. In fact, here's a trick: Tell a joke and change the subject, Mesa says.

When it comes to good ol' Capricorn, you need to be respectful, mature, and effective in your speech. Cap doesn't mess around and wants to be taken seriously, says Mesa. "Respect Capricorn’s opinions and values," Mesa says. Do so by listening and responding appropriately.

Aquarius loves speaking and expressing their own opinions (which they think are pretty good), so you'll want to ask them for feedback when having an argument. "Ask them for their opinion and agree with them while discussing your point of view, too," says Mesa.

When it comes to Pisces, they need to be coddled a little when there's tension. "Be gentle. Show Pisces your soft side," says Mesa. This means being emotional, vulnerable, and real, and letting them feel safe, as well. "Put music on. Have a drink," suggest Mesa. It's kind of like date night, but in the middle of an argument?

If you're in dire need to break the tension with your SO, look to these positive behavioral approaches and helpful tricks to communicate more effectively and get back on the same page. Sometimes it's best to change or adapt based on what your partner needs, if you're hoping to achieve a common goal.

More like this
Emily Ratajkowski & Pete Davidson's Astrological Compatibility, Revealed
By Nina Kahn
The Best Self-Care Strategy For Your Zodiac Sign
By Marilyn La Jeunesse
These 4 Zodiac Signs Will Breeze Through December's Full Cold Moon
By Brittany Beringer
December's Full Moon Is Bringing Extra Drama For These 3 Zodiac Signs
By Nina Kahn
Get Even More From Bustle — Sign Up For The Newsletter