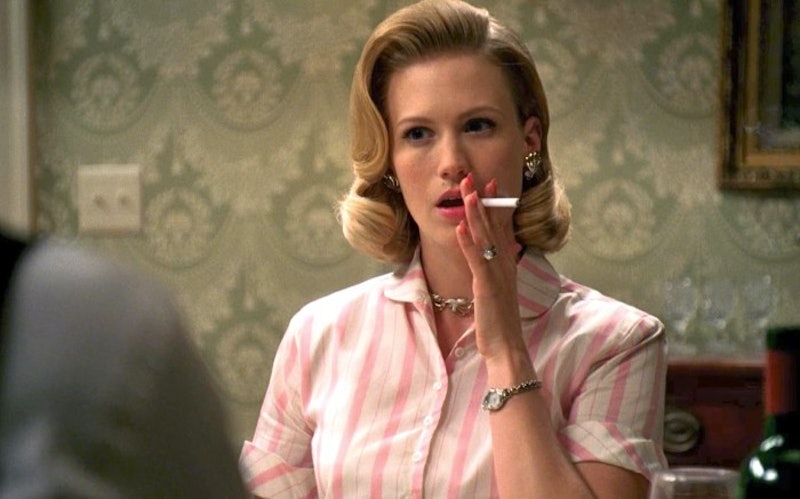 Danielle Swift, a 31-year old bride-to-be, has almost everything figured out for her November 2018 wedding, but there’s still one big item left on her to-do list. As she tells Bustle, “I’m stressing over whether or not I should invite my own mother.”

The question of whether Swift's mother would attend her wedding came up long before she got engaged; she says she has worried about it since she was a teenager. Tensions between the two of them, which were compounded by her mother’s struggles with drugs and alcohol, have been have been building up for “years and years,” Swift explains. They came to a head six years ago, when she and her mother stopped seeing each other in person. They've only spoken on the phone a handful of times in the last three years. Still, only months away from her wedding, Swift feels frozen by a long list of pros and cons, including the fact that her mother has never once asked to meet or speak to her fiancé. “For that reason alone, I don’t think it’s appropriate to invite her to my wedding.” says Swift, noting that she’s afraid this decision will “haunt her either way.”

Traditionally, a wedding is an event that puts your entire life on display. Guests assume that they’re surrounded by all the most important people in your life, and the relationships that mean the most to you. Which is another reason why it’s not easy for Swift to decide whether or not she wants her mom to be there — she doesn't feel comfortable pretending they are something they are not. “If I do end up inviting her, and she comes, how will she be listed in the programs?” Swift says. “Sure, she is my mom, but really, only because she gave birth to me, not for any other reason. Also, will she walk in the processional when the other parents walk in? Does she get a corsage? Is she introduced at the reception? I don’t know if I would be okay with her acting like ‘mother of the year’ for just one day only.”

TV shows, movies, and wedding blogs often depict family conflicts as moments of harmless drama in the wedding planning process (see: “Mamma Mia”), all happily resolved by the time the bride walks down the aisle. But in reality, the process of determining who should or shouldn’t be part of this major milestone is often long and painful, as many brides can attest.

“This is so common,” Shannon Kalberg, LMFT, tells Bustle. As a family therapist, Kalberg has worked with numerous brides who've struggle with whether to make toxic and estranged parents part of their wedding day. She says many of her clients fear a family member might become inebriated and start a fight or object to the union during the ceremony, while others simply have concerns over extending an invitation to a parent who hasn’t been part of their life for a long time.

“I’m okay with the fact that he wasn’t there....It was perfect with who I had and without my father’s negativity.”

When Jamie Rogers, 24, got married last September in front of 35 of her closest friends and family members in Osterville, Massachusetts, one person was intentionally not in attendance: her father.

Rogers’ relationship with her father had never been healthy — “he was verbally abusive to me during my childhood,” Rogers tells Bustle, but it went into rapid decline over the past several years, after she found out her father had been unfaithful to her mother for decades. When it came time for her to get married, Rogers says the decision to not invite her father was easy.

“It wasn’t even a thought,” Rogers says, noting that her father disowned her several years ago, after she became upset about his affair. “I would’ve been a mess if my dad showed. I wouldn’t have been able to have the wedding, because I wouldn’t be able to pull myself together,” she says.

But even though her father did not receive an invitation, Rogers was still worried that he would try to show up at her wedding anyway, since he knew about it from her siblings. “A few of our friends who were in the wedding do security work, so they had a plan in place if he was to show up” she says. “The local police department was notified ahead of time, so an officer was right down the road if need be.”

In the end, her father didn’t try to attend the wedding, and Rogers says that while the idea of him crashing and making a scene brought her a lot of anxiety, she doesn’t regret not including him. “During the wedding, I wasn’t sad,” she says. “I honestly didn’t even think about him the entire day.”

Months later, Rogers is confident that her decision was the right one for her to make, especially because she didn’t hear from her father after the wedding. “I got to enjoy the day with my mom and my sister. I carried my son down the aisle. I’m okay with the fact that he wasn’t there....It was perfect with who I had and without my father’s negativity.”

Of course, that doesn’t mean Rogers was totally at peace with her father’s absence. “I was angry. Angry at my dad because he did not have a care in the world about my wedding day.”

For Swift, having to make this decision in the first place is also a painful reminder of all the ways her mother has let her down, but she knows those feelings will be there whether or not her mother makes it to her wedding. “I’ve watched friends grow up close to their mothers and have them share a big part in their special day,” Swift adds. “It makes me sad thinking that I don’t have a mother that I’m close with, but it’s been my normal for so many years.”

Making the decision to invite — or not invite — your parents to your wedding often involves tapping into some “deep, past, childhood stress or trauma,” says Kalberg, adding that it can be perfectly healthy to let the tears flow as part of the healing process. To help make sure her clients feel validated and confident in their choice, she advises they get other loved ones to weigh in on the situation and offer support. “Brides going through this dilemma can be temporarily blinded by guilt or shame,” says Kalberg “So it's important to have the third-party perspective of a trusted loved one.”

“I ultimately decided that our wedding day was reserved for us to share with the people who loved and supported us — it was not about the associated drama that follows my mom wherever she goes.”

That’s exactly what Francesa DeRogatis did when she was considering not inviting her mother to her 2011 wedding in Northampton, Massachusetts. DeRogatis, who had been estranged from her mother for about five years, ultimately turned to a team of loved ones to help her make the decision.

“My mother has concocted a very misguided narrative of the reasons behind our estrangement, and feels compelled to tell people ‘her side of the story’ when faced with uncomfortable situations where she feels judged as a mother,” DeRogatis tells Bustle. “On the whole, she is so overly concerned with maintaining a carefully curated view of herself, that any challenge to that is met aggressively and without apology, no matter the circumstances.”

Knowing this, DeRogatis and her loved ones took a long, hard look at what it would actually mean to have her mother at her wedding. “After talking with my now-husband, my dad, my siblings and my friends, I ultimately decided that our wedding day was reserved for us to share with the people who loved and supported us — it was not about the associated drama that follows my mom wherever she goes.”

Instead of spending the day focusing on her mother’s absence, DeRogatis says she celebrated the day with many other wonderful women, from aunts to cousins to friends, who have acted as a mother-figure to her over the years. “Without an ounce of regret, seven years later, I can confidently say I made the decision that was right for me.”

READ MORE: What No One Tells You About Breaking Up With Your Toxic Mother

This decision is likely more complicated for brides who have more of a strained, rather than completely estranged, relationships with one or both of their parents. If that’s the case, Kalberg believes that talking to a parent about your concerns and their behavior might be the right move — if you can stomach it. “If you’re brave and willing to confront your mother or father, try speaking to them directly and explaining why they are not being invited,” suggests Kalberg. “Proceed with caution for this option, as the family member needs to have self-awareness and take responsibility for upsetting you.”

“I wonder if I invite her, and she doesn’t come, will even care or notice?”

If you’re not sure if you should even approach the subject, or are having a difficult time managing the stress of dealing with complicated parents on top of all the other stresses of wedding planning, Kalberg suggests using visualization techniques to help get a handle on your feelings. “Set aside some time, take three deep breaths, and visualize what it would be like to have them there at the wedding,” she says. “Then complete the reverse and visualize if they are not in attendance at the wedding. Are they happy for you? Or creating drama? Will you regret that they are there? When you look back on your wedding photos, how will you feel if they’re not in them?”

Swift hasn't yet made up her mind, as she's unsure how she’d feel about wedding photos, or an entire wedding day, without her mother. Her fiancé is supportive of excluding her mother from the wedding, but her father, who she notes has been “a big part of my life” and will be at the wedding, “thinks I should extend the invitation and leave it up to her.”

She’s considering taking her dad’s advice to heart, as he had a similar situation with his own father. “He ended up inviting him to his wedding,” says Swift. "He didn’t want to regret it, and years later, he doesn’t.” Of course, there’s also the possibility that an invitation to the wedding isn’t an olive branch, but rather an invitation for more resentment. “I have a feeling that if I do invite my mom, she won’t come, and it will be just another way she’s disappointed me throughout my life.”

For now, Swift plans on making a final decision by the time she sends out invitations this summer. She is leaning towards an invite, while keeping her expectations in check. “I will probably just send an invitation and follow it up with an email letting her know she’s invited,” says Swift. "Part of me is so used to her disappointing me and not being there for important days of my life, I wonder if I invite her, and she doesn’t come, will even care or notice?”