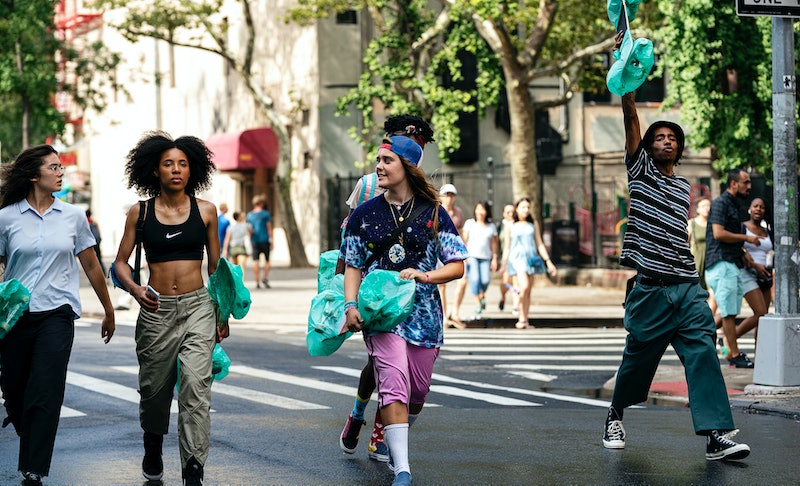 HBO's new series Betty follows a skateboarding group of girls trying to carve out a space for themselves in the testosterone-filled subculture. Series co-creator Crystal Moselle also directed the 2018 movie Skate Kitchen, which followed many of the same cast members playing versions of themselves. The new show, which premieres May 1, once again follows the Skate Kitchen girls as they fall in love, flip tricks, and eat pavement. And if audiences want to follow the Betty cast on Instagram, they're in luck, because they all have burgeoning social media presences.

After stumbling into Nina Moran and Rachelle Vinberg on the subway in New York, Moselle made a series of projects with the Skate Kitchen collective: A short film for Miu Miu, Skate Kitchen, and now the HBO series. "The girls and I have been working together for four years now. So every project that we do, we learn a bit more," Moselle told Newsweek. "I think that they learn their craft a bit more. I learned my craft a bit more because I didn't direct actors before this. I was a documentary filmmaker. But it was really cool to be able to explore more of their stories."

And while not all of them are skateboarding as much as they used to, here's where you can follow all of the Betty cast members and keep up with their latest projects.

More like this
Pamela Anderson's Sons Brandon & Dylan Have Their Own Hollywood Careers
By Arya Roshanian
Ashton Kutcher Wants Danny Masterson “To Be Found Innocent” In Rape Retrial
By Jake Viswanath
'The Queen’s Gambit' Season 2 Tweet Wasn’t From Anya Taylor-Joy
By Mary Kate McGrath, Jack Irvin and Grace Wehniainen
'Bridgerton' S3 Will Show A *Very* Different Side To Kanthony
By Sam Ramsden
Get Even More From Bustle — Sign Up For The Newsletter
From hair trends to relationship advice, our daily newsletter has everything you need to sound like a person who’s on TikTok, even if you aren’t.