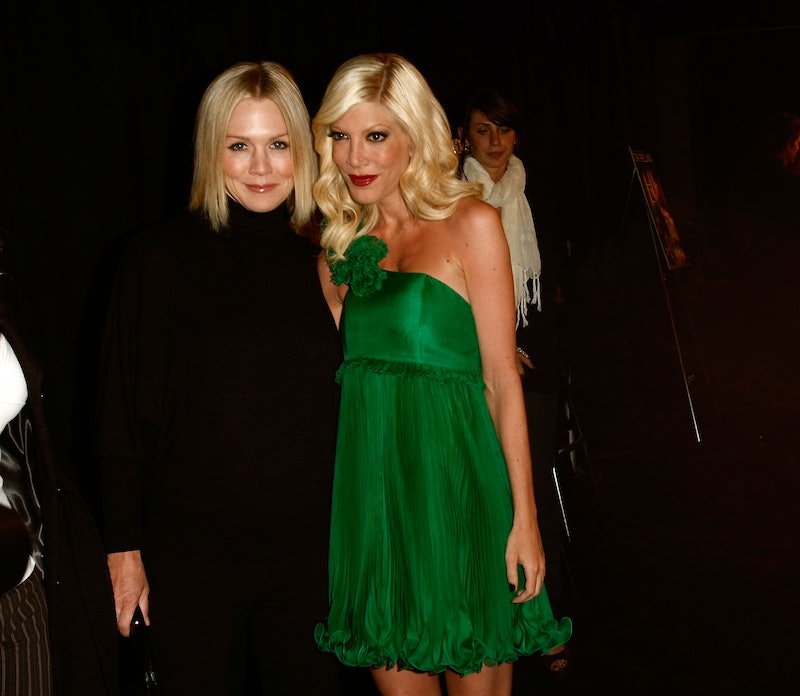 Get ready to return to the rich and very dramatic lives of Southern California's most glamours residents, because the Beverly Hills, 90210 revival will premiere on Fox this summer with many of the original cast members returning. Deadline reported the news on Wednesday, Feb. 27 that Jason Priestley, Jennie Garth, Ian Ziering, Gabrielle Carteris, Brian Austin Green, and Tori Spelling were all returning for the event series, though it won't exactly be a reboot, as one might expect.

Instead, the 90210 revival, announced as a six-episode series, will reportedly be a more meta, irreverent take. Spelling (the daughter of the show's executive producer, the late Aaron Spelling) teased what this 90210 reboot would entail after her exit from the show The Masked Singer just a few weeks prior to the official announcement. "It’s not technically a reboot, because I feel like everyone has seen the reboot...what we’re doing is the entire cast is playing heightened versions of themselves,” she told E! News. "Think Curb Your Enthusiasm episodes, in an hour-long show," Spelling added.

Fox also posted a 90210 teaser video on Feb. 27 following the Deadline report. The short video asks: "Guess who's coming home?" to the tune of the iconic theme song from the show that aired originally in 1990, almost 30 years ago.

The 90210 revival will get the cast back together playing those "heightened versions of themselves," and their characters will be trying to get a reboot of the original show off the ground. To use Spelling's reference, think the plot line in Curb where Larry and Jerry try to get a Seinfeld reunion up and running.

According to Deadline, the revival will follow the original cast-members-turned-characters Jason, Jennie, Ian, Gabrielle, Brian, and Tori as they come together to make a Beverly Hills, 90210 reboot happen. But the "real-life" drama (that, again, will be fake) between the co-stars will be the real soap opera. "What will happen when first loves, old romances, friends and frenemies come back together, as this iconic cast — whom the whole world watched grow up together — attempts to continue from where they left off?," Fox asked in their press release, via Entertainment Weekly. Probably some capital D Drama, which there was a whole lot of behind the scenes during the filming of the soap from 1990 to 2000.

To be clear: this revival is not a reboot of the original show Beverly Hills, 90210, and should also not be confused with the CW reboot which was titled simply 90210 and ran for five seasons from 2008 to 2013. Some original cast members did make appearances on the CW reboot in the first few seasons, including Spelling, Garth, and Shannen Doherty, who is one of the two cast members that is not confirmed to return for the new Fox revival airing this summer. (The other is Luke Perry, who played Dylan McKay; he's currently a regular on another teen soap, Riverdale.)

Before Wednesday's official announcement from Fox, Spelling spilled the beans about the revival in an interview with Access on Feb. 1. She suggested that Perry will do as many episodes as he can with his Riverdale schedule. As for Doherty? Spelling said the cast "would love to have her on" to bring back Brenda Walsh. "If she's watching: we would love to have you do it," Spelling added.

Beverly Hills, 90210 was a huge success and a seminal hit that redefined the teen drama, exploring difficult topics like teen pregnancy, drug use, and AIDS. It paved the way for shows like Dawson's Creek, Degrassi, The O.C., and Riverdale. If you want to catch up on the original 1990 series with all its glorious fashion, you can catch it on Hulu.