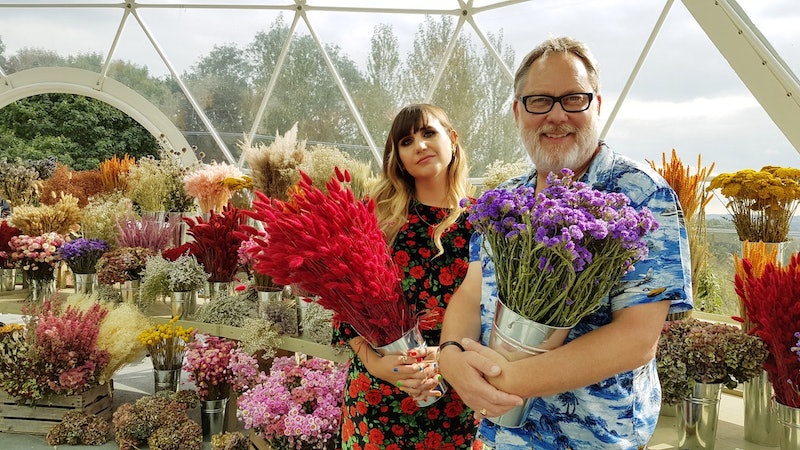 For anyone social-distancing and looking for the perfect escape, Netflix's The Big Flower Fight is the festive competition you need right now. The show, which premiered its first trailer on Monday, May 4, challenges ten pairs of amateur gardeners to create elaborate floral sculptures. The series will bring "ten teams of florists, sculptors, and garden designers" together to "push their talents to the limit" by crafting impressive floral installations, according to a press release.

The Big Flower Fight will be hosted by comedians Vic Reeves and Natasia Demetriou, and the duo will guide the competitors as they prepare their sculptures to be judged — or, as Reeves called them in the trailer, "supersized structures festooned with flowers and foliage." Every challenge will be judged by professional florist Kristen Griffith-VanderYacht and a team of guest judges. The team will evaluate the final pieces, and someone will win, "Best in Bloom," while another pair will be eliminated each week, until only one remains. The winner will be offered the opportunity to display their own sculpture at the London Botanic Gardens, Kew.

Much like The Great British Baking Show, the series seems to create a supportive environment for these artisans, and the trailer shows the competitors offering time updates as well as appreciating each other's work at the end of the challenge. The Big Flower Fight also has a conservationist focus, with contestants encouraged to think about plants that give back to the environment, such as pollinating, insect-friendly species, according to Variety.

Even though the show guarantees wholesomeness, contestants are clearly serious about their work. In the first moments of the trailer alone, viewers can get a glimpse at some spectacular pieces, including a Tyrannosaurus skull, a full-sized flower dress, and a gigantic koala. Though there are also a fair amount of tragic accidents and frustrations.

There's never been a better time to get too invested in whether or not beginner gardeners can construct gigantic floral arrangements under the pressure of a time limit. Florists and gardeners pulling out all the stops on massive sculptures might not have been on your reality-television radar, but now that it is an option, nothing seems like it could be more relaxing or aesthetically pleasing.

The Big Flower Fight premieres on Netflix on May 18.