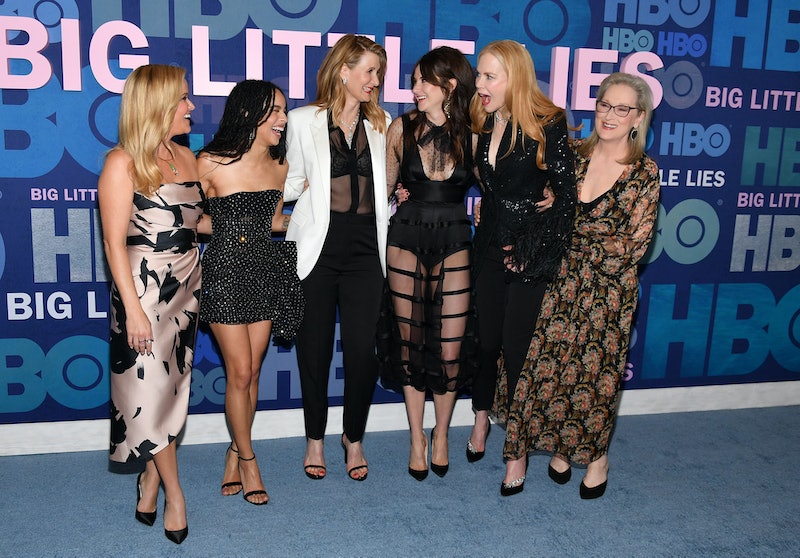 While the Met Gala has come and gone, and award season is no longer here, don't worry. There's still some major premieres happening and major fashion along with them. The latest? The Big Little Lies cast wore all black to the New York premiere of the show because these women stick together both onscreen and off.

Big Little Lies basically became everyone's summer obsession back in 2018, and the show and its cast are back for more this year (and with the addition of Meryl Streep). To celebrate the upcoming premiere of the second season on June 9 on HBO, the women of the cast got together in New York and not only did the Monterey 5 look incredibly, they matched as well.

If you haven't seen the show, there won't be any hardcore spoilers here, but let's just say that one of the lies from the upcoming season is certainly not little, and the cast of characters has to stick together to, well, avoid prison. Yes, the second season of the show's stakes are super high. Clearly, though, the women of Big Little Lies are sticking together based on the trailer, but they seem equally set on solidarity off screen as well. After all, matching outfits kind of screams "We love each other," right?

While each member of the cast (including new member Meryl Streep) rocked a different form of black, they all coordinated perfectly. Reese Witherspoon was rocking a gorgeous satin Elie Saab gown with a pair of classic black pumps. She even gave fans a sneak peek of her look on Instagram before the premiere.

Meryl Streep decided to go with a more boho look that maybe wasn't so Monterey waspy glam, but was definitely a great choice for the premiere.

Zoe Kravitz looked stunning in a party-perfect black mini dress with an 80s-esque bow detail on the hip from Yves Saint Laurent and simple sandals.

As for Nicole Kidman, she brought out not just the sequins but the feathers, too. She paired a sequin and feather detail Michael Kors jacket with a pair of sleek black cigarette pants and a pair of shoes that will likely make you start drooling.

If the coordinated ensembles of the Big Little Lies cast at the New York City premiere doesn't prove their bond, then the actors' social media posts do.

Reese Witherspoon posted an image of the ensemble on the red carpet with the caption, "The power of sisterhood and friendship is limitless! So proud to work with these remarkable ladies. Can’t wait to share Season 2 of @biglittlies with y’all! June 9th on @hbo." Costar Nicole Kidman also took to her social media to post a photo of the cast together letting fans know about her excitement for the new season. Laura Dern simply posted black hearts with waves (of Monterey) on her Instagram.

Whether it's on screen or on the red carpet, the women of Big Little Lies stick together. Thankfully, IRL, it's not to avoid jail time. It's totally slay a red carpet premiere.