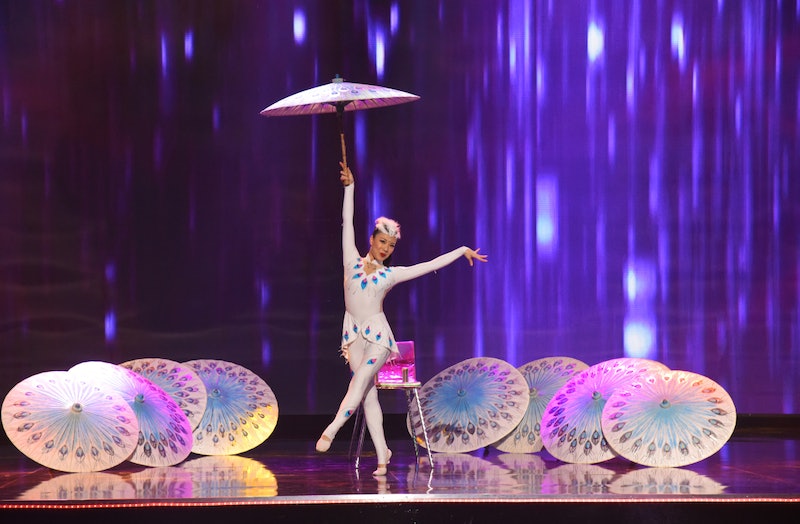 Shows like America's Got Talent and The World's Best ask performers to battle it out for a massive cash prize (and in AGT's case, their own headlining Vegas show). But The CW's Big Stage breaks that mold. On the new series, there are no judges or competition. In fact, there's not even a Big Stage prize. The show is merely a platform for acts to flaunt their extraordinary talents — and for viewers to sit back and enjoy the show.

The CW advertises The Big Stage as the "ultimate non-competitive platform for talented acts from around the world to display their mastery of performance," and advertisements for the show feature jugglers, roller skaters, acrobats, and dancers with some complicated-looking laser setups, among others. Being on television is obviously a great opportunity for exposure, but why perform on a show like The Big Stage without the promise of, well, anything?

Well for one, any savvy influencer can tell you that any platform is a good platform — and when you're just starting out, it's not so much about the money as it is making a name for yourself. And secondly, just being on TV has worked pretty successfully for a lot of people in the past, even when they didn't actually win.

Have you heard of Jennifer Hudson, Oscar winner, recording artist, and Broadway star? It can be easy to forget she only placed seventh during American Idol Season 3. And how about Adam Lambert, Grammy nominee and lead singer for Queen — you know, the iconic rock band? He was the runner-up on American Idol Season 8, but you're probably much more likely to know his name than actual winner Kris Allen. Ultimately, winning is only part of the strategy at work — just putting yourself out there is the most important part.

The Big Stage is designed to produce exactly the kind of viral moments that can launch everyday people to instant fame. A Youtube search of "golden buzzer" acts — acts so good that America's Got Talent judges use their once-a-season Golden Buzzer to send them straight to the live shows — returns multiple videos that have passed the 20 million view mark. That viral fame doesn't always translate into financial gain, but getting on a show like The Big Stage at least gives them a shot at it.

And if The Big Stage doesn't end up being the break its performers are looking for, it's not necessarily because there's not a prize. Part of the reason viewers fall in love with certain acts on season-long competition shows is that they get to see them refining their acts week after week. The Big Stage, on the other hand, only shows each act once and moves on to the next, so if you're on the show, you need to make sure you leave a lasting impression. In the end, The Big Stage prize is just the privilege to perform on national television; it's up to the performers to make the most of that opportunity.