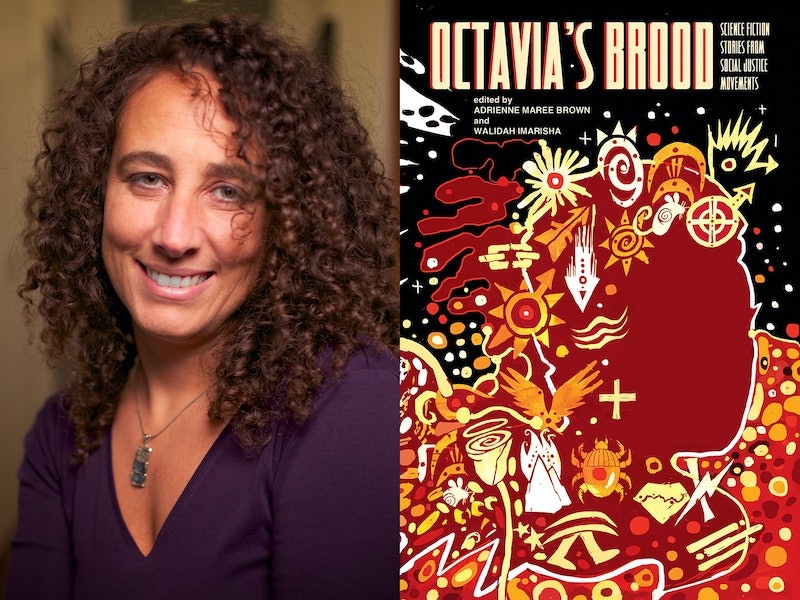 Andrea J. Ritchie is a Black lesbian immigrant and police-misconduct attorney, and a 2014 Senior Soros Justice Fellow, with more than two decades of experience advocating against police violence and the criminalization of women and LGBTQ people of color. She is currently Researcher-in-Residence on Race, Gender, Sexuality, and Criminalization at the Barnard Center for Research on Women.

The co-author and author of three books including Say Her Name: Resisting Police Brutality Against Black Women, Queer (In)Justice: The Criminalization of LGBT People in the United States, and her most recent release Invisible No More: Police Violence Against Black Women and Women of Color, it is clear that Ritchie is at the forefront of the issues that queer people and black women are facing today in the US.

Below she shares some of the books by black feminist writers that she finds crucial to inspiring resistance.

Ritchie says: "Barbara Smith, All the Women are White, All the Blacks are Men, But Some of Us Are Brave was my first introduction to Black feminism—I remember seeing the title on a bookstore shelf in college and feeling tears come to my eyes because it resonated so deeply. I would walk by what used to be called the “women’s studies” department and feminist meetings but never go inside because I didn’t see anyone like me in those rooms. So I would be sitting in classes in Africana Studies and meetings at the Black Student Union, where conversations focused almost entirely on male subjects, targets, and resistance to racism, and I would try to be brave (with my light skinned self)."

"My two salvations were Patricia McFadden, an African feminist in exile during the apartheid years who came to teach classes focused on gender in Africana studies my senior year, and coming across this book. A few years ago someone told me that they were majoring in Black Queer Studies at Princeton, and I just stared back at them in awe and disbelief. This book was my Black queer studies major! It drove me to resist erasure of Black women & queer people’s voices and experiences in narratives of Black liberation, and to claim our space within broader struggles for justice."

Ritchie says: "The Angela Y. Davis Reader was one of the first books that really pushed me to resist police violence against Black women. In this collection of essays spanning over three decades, Davis engages in groundbreaking analysis of the experiences of Black women from slavery through mass incarceration, and of the powerfully intertwined roles of state and interpersonal violence in Black women’s lives. In one piece originally published in 1985, she calls on anti-violence activists to organize around cases of police violence against Black women as a central strategy to combat both violence against women and racism. That essay, and this book, literally set me on the path that culminated in writing Invisible No More: Police Violence Against Black Women and Women of Color, and the research, organizing, litigation, and advocacy that informed it."

Ritchie says: "Assata: An Autobiography was similarly formative for me—the story of a Black woman leader in Black liberation struggles who challenged the gender and sexual dynamics within those movements at the same time, reckoning with the roles of lover, mother, sister, and daughter within those contexts. The brutal violence she experienced at the hands of police is often subsumed within broader narratives about her, but is something that has really stayed with me. Essential reading for Black August."

Ritchie says: "Color of Violence: The INCITE! Anthology was just reissued by Duke Press after its original publisher, South End Press, closed its doors. This collection of essays and poems is an essential guide to recognizing and resisting multiple forms of state violence targeting multiple communities of women of color – and to envisioning community-based responses to violence that do not involve police, or policing. The Revolution Will Not Be Funded, also by INCITE!, represents an important challenge around the forms our resistance takes—illuminating how non-profits are set up to constrain, control, and capitalize our resistance, even when we have the best of intentions and make our best efforts to subvert them."

Ritchie says: "Parable of the Sower and Parable of the Talents by Octavia Butler. Butler’s entire body of work is enjoying a resurgence in this political moment, with good reason. One of the many lessons of these two books is that there is no one form of resistance that will lead us to freedom: individual and collective change and transformation are both the means and the goal."

Ritchie says: "This lusciously beautiful and unique collection of visionary fiction by social justice activists is rich in forms and possibilities of resistance. My soul literally soaked it up like a sponge as I read it, leaving me thirsting for more. I would often finish a story only to immediately turn back to the beginning to read it again. This is where the crucial work of resistance lies—in imagining futures, both as dystopian as we can envision and as creative in resistance as we can conjure. We can’t build a new world until we can imagine it, and these brilliant writers take us on stunning journeys that point the way to a humanity we can only dream of."

Ritchie says: If you haven’t read it yet, get it. Immediately. Emergent Strategy is an examination of where our movements have been and an offering of a framework for resistance that is rooted in the miracles of nature, decentralized, collective leadership, and personal, relational, organizational, and movement-wide transformation. Brown not only inspires me to resist, but to do in the most beautiful, joyful, creative, sustainable, collective and effective ways."

More like this
We’ve All Had Bad Sex. Nona Willis Aronowitz Is Talking About It.
By Sophia Benoit
UK Black Pride 2022 Just Broke A Major Record
By Sam Ramsden
Charlene White & MPs Lead Tributes For Bristol Bus Boycott Organiser Roy Hackett
By Sam Ramsden
An Honest Review Of The F1 Pro Massage Gun
By Carolyn Steber
Get Even More From Bustle — Sign Up For The Newsletter