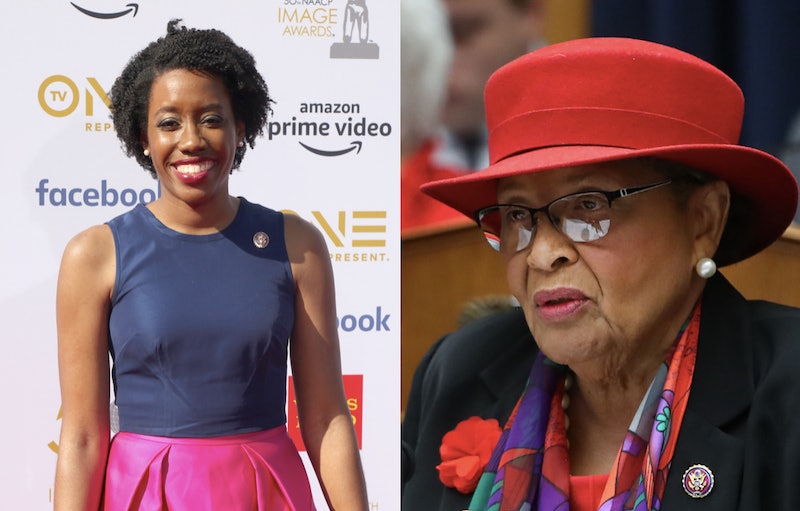 National studies indicate that the mortality rate for Black mothers is significantly higher than it is for their White counterparts, but there hasn't been a concerted focus on this issue at the federal level — until now. On Tuesday, Reps. Alma Adams and Lauren Underwood announced they're forming a Black Maternal Health Caucus that they say is aimed at researching and developing policies to combat the problem.

“The facts are simple," Adams tells Bustle. "Black women are dying of preventable, pregnancy-related complications at an alarming rate, and as [a] black mother and grandmother, it’s personal to me."

The available data is alarming. Per the CDC, black mothers die at a rate that is three to four times higher than white mothers. Specifically, the agency found that there are 12.4 deaths for 100,000 live births for white women, whereas for black women, that rate is 40 deaths per 100,000 live births. The Black Maternal Health Caucus, Adams says, will seek to address this discrepancy.

"Maternal mortality disproportionately impacts black women, and I started this caucus so my colleagues and I can work together to find culturally-competent solutions specific to the black community," Adams says. "We aim to raise awareness about this issue in Congress and work toward legislative solutions.”

“This issue extends beyond statistics. For too many women and families, it’s their reality," Underwood said, adding that this "demands unique congressional attention."

ThinkProgress reports that the caucus includes more than 30 people so far. Underwood said on Tuesday that caucus members will aim "to elevate black maternal health as a national priority and explore and advocate for effective, evidence-based culturally-competent policies and best practices."

Black Mamas Matter Alliance, an advocacy group that will be working with the caucus, according to ThinkProgress, has provided a list of action items that they believe Congress should take up. Included on the list is the request that black leaders be included when drafting legislation, as well as explicitly acknowledging how racism factors into the mortality rate discrepancy, according to ThinkProgress.

While introducing the caucus at the press conference, Underwood noted that several individual bills related to black maternal mortality rates are currently sitting in various committees. The new caucus, she said, would be partly focused on providing a space for those bills to be discussed and gain support so that they might ultimately be passed.

Just two weeks ago, for example, Illinois lawmakers Rep. Robin Kelly, along with Sens. Dick Durbin and Tammy Duckworth, introduced the MOMMA's Act in Congress. That bill, which is currently in committee, would take aim at maternal mortality rates by extending Medicaid coverage to postpartum mothers up to one year after giving birth, as well as promote coordination and collaboration among maternal mortality review committees. It would also seek to improve "access to culturally competent care throughout the care continuum," according to a press release.

“Mommas are dying across this country. Every year, we lose more mommas to rising rates of maternal mortality and it’s a sad fact that it’s more dangerous to have a baby today than it was 25 years ago,” Kelly said in a press release marking the bill's introduction. The release specifically pointed to the maternal mortality rate in Illinois, where, according to the state's Department of Public Health, black mothers are six times more likely to die than white mothers.

Sen. Kamala Harris also recently introduced the Maternal CARE Act, though that bill has not moved out of committee. Harris' bill would launch two separate grant programs: one aimed at backing implicit bias training for medical professionals, and another to focus on developing programs to reduce pregnancy complications, according to a press release.

According to Underwood's remarks at Tuesday's press conference, the newly-formed caucus may become a place to discuss and streamline support for such pieces of would-be legislation. The goal, she said on Tuesday, was to help "usher through" such initiatives.

"The status quo is intolerable," Underwood said. "We must come together to reverse current trends and achieve optimal birth outcomes for all families."