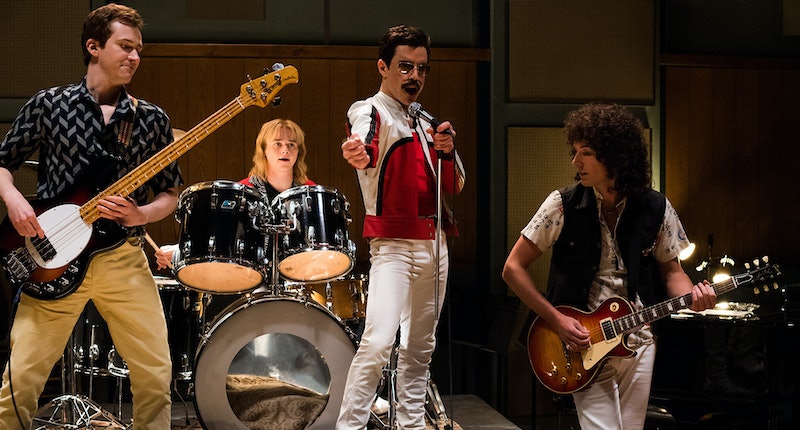 If you watched the trailer for the Freddie Mercury biopic Bohemian Rhapsody, you probably realized Rami Malek isn’t actually singing in it — in fact, the film used Queen's recordings to make it feel as authentic as possible. That means that rather than having an original soundtrack featuring the cast singing, the Bohemian Rhapsody soundtrack is actually a compilation of the band’s greatest hits, as well as some lesser-known songs that are an important part of the band and Mercury’s story. The soundtrack is already out now, so you can listen to it on your preferred streaming platform before the movie comes out on Nov. 2.

What makes this movie soundtrack so special is that it combines both studio and live versions of the songs, which makes them feel realistic in the film. Among the concert scenes is the band’s legendary Live Aid performance at Wembley Stadium, which is widely considered the best Queen performance in the band’s history.

Live Aid was a charity concert held simultaneously in several different cities to help victims of the ongoing famine in Ethiopia. The event had an all-star lineup, including David Bowie, The Who, Elton John, Bob Dylan, and more—but Queen were the ones who stole the show. To the frontman and the rest, the set was an opportunity to prove the band’s worth against the other icons performing. “Everyone will be trying to outdo each other, which will cause a bit of friction. It makes me personally proud to be a part of it,” said Mercury, according to The Telegraph.

Queen performed their hits “Bohemian Rhapsody,” “Radio Ga Ga,” “Hammer to Fall,” “Crazy Little Thing Called Love,” and “We Will Rock You,” ending with “We Are the Champions.” According to The Telegraph, the performance amazed the crowd so much that Elton John reportedly barged into their dressing room after the set, “screaming that they had stolen the show.” The Bohemian Rhapsody soundtrack includes the entire performance, allowing fans to experience that iconic moment in the film.

The soundtrack also includes plenty of other gems for fans, including Queen's live performance of “Love Of My Life” at the Rock in Rio Festival, featuring a sing-along with fans; “Keep Yourself Alive” from their The Rainbow show in London, which became the band’s first live album; a “movie mix” of their classic “We Will Rock You,” combining a live version with the studio one; and a new version of “Don’t Stop Me Now.”

Queen members Brian May and Roger Taylor served as consultants in the film, and they've contributed to the collection as well. One of those treats is a fun 25-second cover of the “20th Century Fox Theme,” giving it their own Queen spin on it with electric guitars.

Listeners will also get to hear a "revisited" version of the song “Doing All Right," by Smile. Queen’s biggest fans will recognize the band name as the one some members were a part of before forming Queen. A year after Mercury’s death, the band briefly reunited to perform some songs together but never formally revived the band. This year, per Sterogum, May, Taylor, and lead singer Tim Staffell came together once more to record this brand new version of “Doing All Right” for the film.

No matter if you’re a huge Queen fan or a casual listener, this soundtrack will make you think about the importance of Freddie Mercury’s legacy, and keep you rocking all winter long.

More like this
The Trailer For The Whitney Houston Biopic Has Twitter Feeling Heated
By Radhika Menon
Olivia Wilde & Harry Styles' Relationship Timeline Started With 'Don’t Worry Darling'
By Jake Viswanath
Harry Styles’ Red Carpet Looks Have One Thing In Common
By El Hunt
Everything To Know About Taylor Swift’s 10th Studio Album, 'Midnights'
By Grace Wehniainen and Jake Viswanath
Get Even More From Bustle — Sign Up For The Newsletter