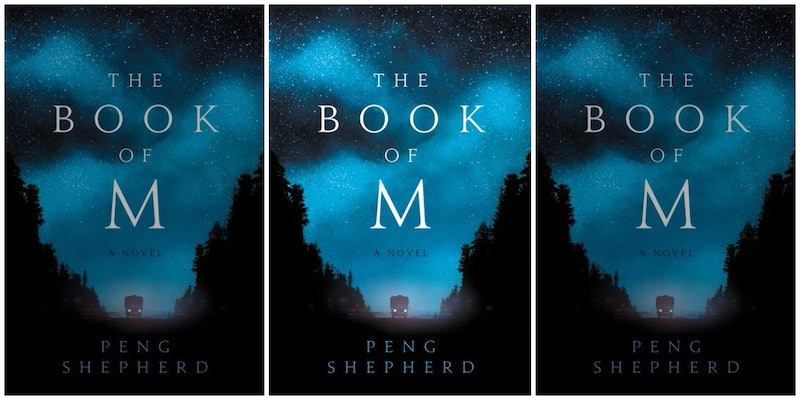 Every once in a while, you come across a book so alluring, so addicting, so utterly irresistible, it makes you want to forget the world around you and continue to exist in those delicious moments of reading it for the first time. For me, Peng Shepherd's breathtaking debut novel The Book of M is that book. A beautiful and haunting story about the power of memory and the necessity of human connection, this book is a post-apocalyptic masterpiece and the one dystopian novel you really need to read this year.

In a near future world, a man at an outdoor spice market in India suddenly loses his shadow, a phenomenon scientists cannot explain. But as people around the globe watch, fascinated, from their TV screens, he unexpectedly begins to lose something else, too: his memories. Unable to recognize his own brothers or remember who his mother is, the shadowless man is ushered to a medical facility to be studied, but soon, he isn't the only one afflicted.

In communities all around the globe, people's shadows disappear, and in their place come strange and unfathomable abilities that threaten humanity's very existence:

"Then it spread further. The ones left all started forgetting too, and disappeared. Wandered right out of their houses and couldn't remember how to get back, or died of starvation in one room, unable to figure out how to unlock a door or that there was an upstairs, until the doors themselves vanished from the walls and the stairs flattened to hallways, trapping them forever. How to get back to a shelter, how to use a can opener, that rain existed. Who would have thought that you'd need a shadow to work a key or recall your mother's name?"

Hidden in an abandoned hotel deep in the woods, Ory and his wife Max have escaped the Forgetting for two years, but they have seen plenty of its consequences: chaos, destruction, heartbreak, and death. They are alone, starving, and cut off from the rest of the world, but they are safe — that is, until one day Max loses her shadow and runs away before she can hurt the husband she loves. Determined to find her no matter the cost, Ory sets out on a perilous journey rife with unknowable threats and unexplainable magic to find a woman they may have already forgotten he even exists.

As they travel separately across an unrecognizable world, Ory and Max face everything from murderous bandits and sinister cult leaders to shadowless kings and shadowed war generals, but somewhere out there, there is a strange new force growing that might just save them all.

A thought-provoking novel that combines the emotional urgency of a love story with a dash of magic and the dangerous thrill of a post-apocalyptic world, The Book of M is stunning debut from a talented new author. Whether she is writing about India, Iran, Boston, New Orleans, Washington, D.C., or somewhere in between, Peng creates a rich atmosphere and distinct sense of place that brings her upside down world to life before her readers' eyes. Even better than her unique dystopian world building are Peng's dynamic and diverse characters, each one on a different quest: for survival, for love, for redemption, for salvation. Their intertwining journeys, across time and across the world, paint a vivid picture of memory's crucial role in loving, in living, and in humanity.

As Max says into the tape recorder she keeps around her neck to help her remember, the price of forgetting isn't just heartbreaking — it can be deadly:

That nail-biting tension, that fear of forgetting, runs throughout The Book of M to create an emotional page-turner in which you're invested in each and every character's ending.

But what truly makes The Book of M such a sublime novel is its storytelling. Peng's layered narrative follows not only the moving love story of Ory and Max, but so many other incredible stories — of two sisters willing to risk their own lives to save the other, of a heartbroken widow who finds himself general to an army in a bloody war, of a troubled amnesiac attempting to harness the power of memory to find a cure for forgetting — all of them gripping and powerful in their own unique ways. Peppered throughout are also tales of magic and myth, religious allegories, legends, folktales, each one a kind of collective memory.

A brilliant and beautiful debut, The Book of M is a provocative novel that will force you to contemplate not only the power of memory, but the very nature of it. What if, as the book suggests, they are "something we somehow can move or share. Maybe not all of them, but at least one. One memory. One thing that always stays, across time and space." What memory would it be?

More like this
The 'Firefly Lane' Book Ending Teases Way More Tears To Come In 2023
By K.W. Colyard
The 'Lady Chatterley's Lover' Book Leaves Us With A Troubling Question
By Catharina Cheung
'Bridgerton' S3 Teases Exciting Social Season For Penelope Featherington
By Bustle
David Tennant’s Transformation In ITV’s 'Litvinenko' Is Astonishing
By Sophie McEvoy
Get Even More From Bustle — Sign Up For The Newsletter