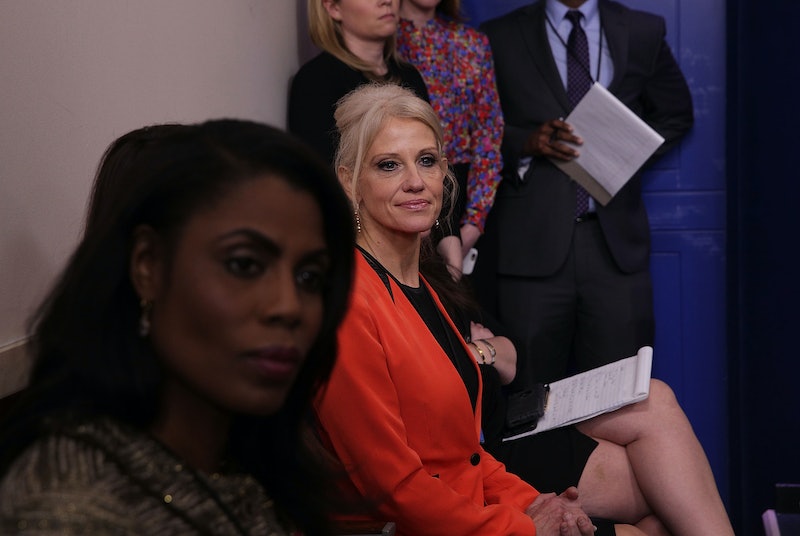 Kellyanne Conway's "Bowling Green massacre" flub has gone super-viral in just a few hours, and the instant meme is being put to great use. A fake donation site for the fake massacre is collecting money for the ACLU, one of Donald Trump's chief legal opponents. Instead of just focusing on Conway's lies, the incredible people who made the site are turning a potentially dangerous fake news story into an awesome way to perpetuate the resistance to Trump's administration.

BowlingGreenMassacreFund.com popped up sometime Friday morning, not much longer than 12 hours after Conway's interview. The website features a large black and white photo of a young man somberly staring out a window, with a "Donate button" that links to the ACLU donation form. Although the site is built entirely to link back to the organization's donation page (with the goal of trolling Conway), the ACLU confirmed in an email to Bustle that the organization was not involved in creating the website, nor is it aware of who is behind it.

Conway's already infamous quote about the fake attack is also featured at the bottom of the webpage. “I bet it’s brand new information to people that President Obama had a six-month ban on the Iraqi refugee program after two Iraqis came here to this country, were radicalized, and they were the masterminds behind the Bowling Green massacre,” it reads.

This meme and website will hopefully add more to the ACLU's already overflowing coffers as they gear up for the next four years. The organization received over $24 million in donations in response to Trump's refugee ban, six times more than it usually receives in online donations in a whole year. People are taking Trump a lot more seriously after his first two weeks in office, especially those committed to preventing his agenda from coming to fruition, so those donations should continue to grow in response to this incident, too.

Given the United States' tragic and very real history of mass shootings, the website is a little irreverent. However, if it works, it works. The ACLU is one of the most committed and resourced organizations working to combat the Trump team's propensity for lying and intentional manipulation of facts. Conway's "honest mistake," as she called it, is really just another example of the consistent gaslighting techniques she and her colleagues have employed over the last several months.

In a way, everyone is a victim of the "Bowling Green massacre," since it's now synonymous with the tragedy that is Conway herself. The Victims Fund at least steered the story back in the right direction, toward something actionable, but it's important to remember not to get too distracted by the Trump administration's embarrassing moments. Just laughing at Conway doesn't do any good for refugees trying to reach the United States or LGBTQ+ people trying to hold on to their rights.