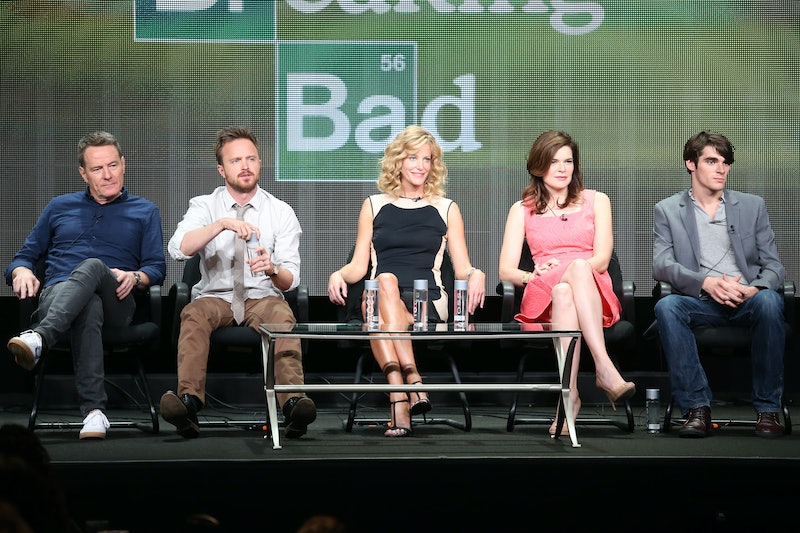 Her former chemistry teacher-turned-drug king pin husband lied, stole, manipulated, killed, and repeatedly put families' lives at risk — and that's just the short list. So, why, exactly, did fans despise Walter White's wife so much? Well, it turns out that the cast of Breaking Bad didn't understand the sexist backlash against Skyler White (played by Anna Gunn) when the show was on the air, and they're still struggling to make sense of it all today, according to an interview published with Entertainment Weekly on June 30 to celebrate Breaking Bad's 10-year anniversary.

Watching the pilot of Breaking Bad, it's easy to root for the cancer-stricken Walter White (played by Bryan Cranston) as he discovers a new life as a drug dealer to raise money for his family. However, even as Walter grew more villainous over the years, fans continued to root for his increasingly nefarious behavior, and found an unsuspecting villain in Skyler White instead. "It was very bizarre and confusing to us all," Gunn told EW of the backlash against Skyler.

"It was a combination of sexism, ideas about gender roles, and then honestly, it was the brilliance of the construct of the show. People did find a hero in Walt, but they wanted so much to connect with him so viscerally that to see the person who often was his antagonist — therefore the show’s antagonist in a way — they felt like she was in the way of him doing whatever he wanted to do, and that he should be allowed to do what he wanted to do."

Gunn wasn't the only member of the Breaking Bad cast who didn't see the Skyler hate coming, though. "Why did our audience not sympathize with this poor woman?" Aaron Paul — who played White's troubled meth-making apprentice and eventual business partner, Jesse Pinkman — wondered in conversation with the publication.

"Granted, she is the thorn in Walter White’s side, and everyone’s rooting for Walter to succeed, but my God," Paul said. Echoing Paul's sentiments, Cranston added, "[If ] you look at the elements that were involved in this — husband she finds out is lying, husband she finds out is doing something illegal, is doing something that puts her family in lethal danger, and she’s being chastised — it’s like, 'Wait a minute.' It baffled me from an objective standpoint."

It's been 10 years since Breaking Bad first captivated viewers, and much has changed in terms of how society responds to unbalanced gender constructs, both on-screen and off. In 2013, Gunn wrote an op-ed for the New York Times about fans' vitriol for her seemingly unlikeable character. It had taken somewhat of a toll on her as an actor at the time, but she managed to nail the public's problem with Skyler squarely on the head. "I finally realized that most people's hatred of Skyler had little to do with me and a lot to do with their own perception of women and wives," Gunn wrote. "Because Skyler didn't conform to a comfortable ideal of the archetypical female, she had become a kind of Rorschach test for society, a measure of our attitudes toward gender."

It's an observation Gunn reiterated for Entertainment Weekly's Breaking Bad 10-year-anniversary reunion piece. "It’s about the way people are connecting to [Walter White]. It’s also about the way that people still hold on to, perhaps, older ideas of what a woman or a wife should be or how she should act or how she should behave," she said. Now that she's had a bit of distance, Gunn expressed hope that her character, and the backlash she endured during the run of the show, will make fans think twice about their judgements in regards to her character. "[Change] isn’t always comfortable and isn’t always pleasant, but it’s good that it was brought to people’s attention and consciousness."

Her name was Skyler White, yo. Her husband was Walter White, yo. And just so you know, she was so much more than that and it's great to see that people are finally starting to see the light.