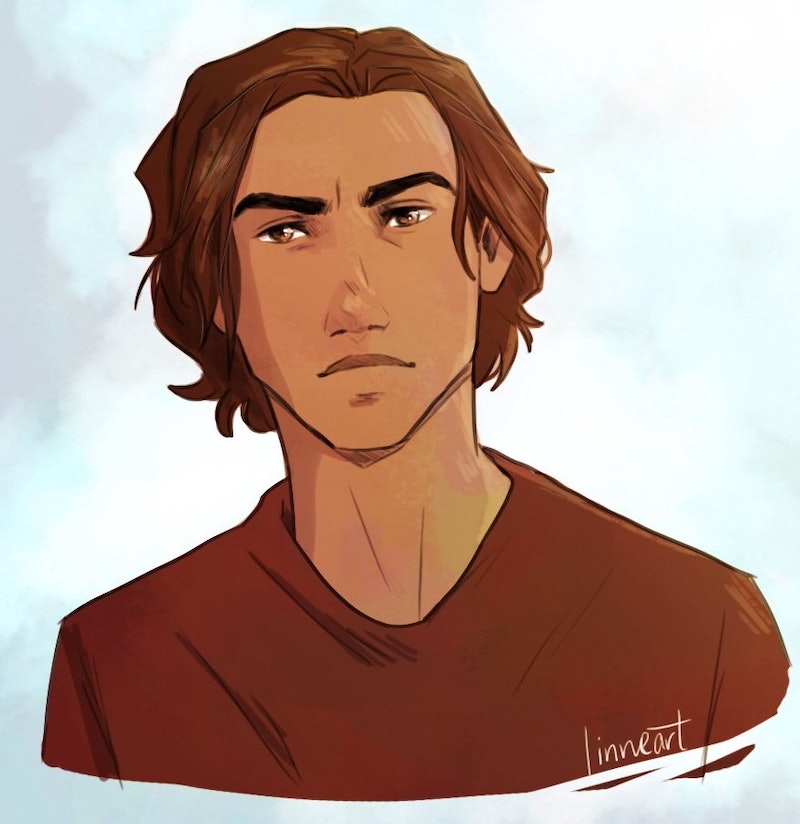 Courtesy Of Linnea Gear & Carrie DiRisio
By Zoraida Córdova
May 26, 2017

You know him as the most interesting guy in the book. Which book? Every book, obvs. He saves damsels who may or may not be in distress. He has sparkling amethyst eyes. He can be a touch dramatic, but it's totally OK because he's still redeemable. He's Brooding YA Hero, a.k.a Broody McHottiepants, and he's finally getting his own book: Brooding YA Hero: Becoming A Main Character (Almost) As Awesome as Me, out Oct. 3 from Sky Pony Press. Bustle is proud to present an exclusive first look at the cover for the forthcoming novel, which you can see below!

Carrie DiRisio, author of the forthcoming book and creator of the viral Twitter account, Brooding YA Hero, tells Bustle that she started the account as a joke among friends. Before long, the account went viral, and it now boasts over 40,000 followers.

"It was really exciting, but I didn’t make it more or less than before," DiRisio tells Bustle. "At the end of the day, I just wanted to make people giggle."

In Brooding YA Hero, DiRisio plans to tackle some of the YA world's best loved and most hated tropes — Chosen One narratives, evil ex-girlfriends, and, of course, love triangles. The book is formatted as a self-help guide written as Broody tries to achieve "main character status." Unfortunately, his road to fulfillment (and true love) is thwarted by his ex-girlfriend, Blondie DeMeani. Will Broody find the answers he seeks — or perhaps a sequel? We shall see.

Bustle is proud to exclusively reveal the cover for Brooding YA Hero: Becoming A Main Character (Almost) As Awesome As Me, illustrated by Linnea Gear, which you can see below. Plus, scroll down for details on the book — straight from author Carrie DiRisio!

Brooding YA Hero: Becoming A Main Character Almost As Awesome As Me by Carrie DiRisio, $18, Amazon

Young adult readers and writers know that part of Brooding YA Hero's charm is his honesty. Despite his oblivious nature, the fictional hero has been able to call out some of the genre's biggest problems.

"The best humor sometimes has the ring of truth to it," DiRisio says. "I think as fun as it is to talk about swoony male heroes and book boyfriends, they are unfortunate implementations of heteronormative tropes that are repeated."

But DiRisio isn't just going to tackle problematic representations of male heroes in the book — she's going to talk about the girls, too. One of the stars of the novel will be the "Unlikeable Girl" — a term I hate, but a girl I love. "Blondie is the other main character," DiRisio says. "I’m playing with this meta-narrative where she’s evil, knows she’s evil, but still wants to be the main character, and you get to see it from her POV."

When it came to turning tweets into a novel, DiRisio thought a lot about structure — especially because this isn't the typical hero's journey. "I never thought of it as a narrative but I had a lot of fun coming up with how he would have a narrative," she says. "And it’s like an inverted way of creating a book because you start with character and then find him a plot. He lives in all genres, and it’s interesting thinking about how he would act in each world. In the book he’ll open a door, and it’ll be like 'Oh, we’re in Medieval London again' or open the door to a dystopia."

"It’s self-referential and meta in the way that he’s writing a how-to guide with activities and quizzes with full illustrations," she adds.

So, is Broody getting a sequel? DiRisio's lips are sealed. But she does have some wonderful thoughts on what changes she would like to see in young adult literature. "I want people to feel unafraid to question their faves," she says. "If there is a book series that you adore but maybe there’s a lot of white-saviorism, or emotional abuse, or maybe every single book you read ends with heteronormativity, branch out to explore the books that capture all the beauty and diversity that our world has to offer."

Broody McHottiepants also has one thing to add: "But don’t branch out so far away that you fall out of love with me."

Brooding YA Hero: Becoming A Main Character Almost As Awesome As Me by Carrie DiRisio, $18, Amazon

More like this
'The Sandman’s Ending Is A Departure From Neil Gaiman’s Comic Book Series
By Kadin Burnett
I've Read The Harry Potter Books 30+ Times & This Plot Hole Haunts Me
By Kelsey Stiegman
'Bridgerton’s Jonathan Bailey & Simone Ashley Just Teased A First Look Of “Kanthony” In Season 3
By Grace Wehniainen, Alyssa Lapid and Sam Ramsden
The Biggest Differences Between 'Bullet Train' & The Book It’s Based On
By Arya Roshanian
Get Even More From Bustle — Sign Up For The Newsletter