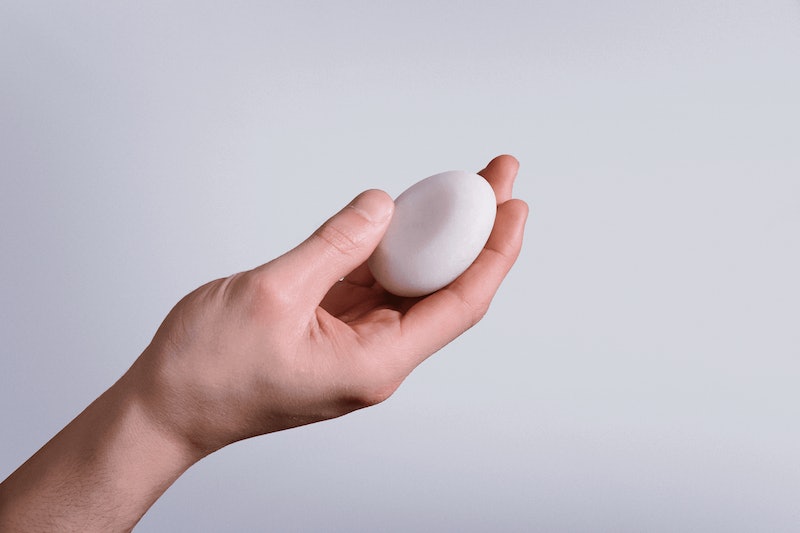 Fidget toys have grown in popularity over the past few years, boasting benefits such as helping you calm your nerves in the workplace. However, many fidget products currently on the market are designed for kids. Enter the Calming Pebble, a design-y reminder to chill out that might be the coolest thing on Kickstarter right now.

The Calming Pebble, created by Wyth, is your not-so-average worry stone: The pocket-sized object has a small dimple to run your finger across, and is designed from a semi-polished marble — making it natural and smooth. Additionally, the stone is waterproof, ergonomic, and can cool down and warm up in the palm of your hand without batteries. Though it may sound and look simple, the Calming Pebble is anything but: The stone underwent “multiple rounds of prototyping selecting the optimum shape, form, material, and weight that felt the best,” according to the Kickstarter campaign page.

Fidget toys, such as the Calming Pebble, aren’t just a fad. As Scientific American reported in 2017, recent studies have shown they may actually help to decrease stress and increase mindfulness in adults. What’s more, The Atlantic reported in 2015 that researchers found that these so-called “fidget widgets” may even boost attention and memory in some people. In particular, many autistic people and people with anxiety disorders, ADHD, or sensory issues have found fidget toys are helpful when it comes to managing their symptoms in the workplace. (It’s important to note scientists say more research needs to be conducted on the supposed benefits of fidget toys.)

Not unlike traditional fidget spinners and stress balls, the Calming Pebble is meant to soothe you when you’re feeling stressed at work, restless in that two hour-long meeting, or just in need of instant relaxation. As the campaign explains, “Squeezing the pebble activates the muscles of your hand and wrist, and releasing your grip allows your muscles to relax. The repeated pattern of grip and release alleviates tension and stress.”

This sleek stone isn’t nearly as thick as a fidget spinner or cube, meaning, it can easily slide into your pocket, bag, and desk drawer at work. Basically, the Calming Pebble is like the grown-up version of all the fidget toys many people have grown to love and use on a regular basis.

So, how do you get your hands on one of these pretty, pocket-sized stones? When it hits the market, the Calming Pebble will retail for $25. However, you can currently pledge to Wyth’s Kickstarter to receive the pebble at a discounted price until the campaign ends on June 27. You have the option of pledging $19 for one Calming Pebble, $29 for two, and $42 for three. Further, this smooth fidget widget comes in three different colors to choose from, including Cloud White, Moon Grey, or Shadow Black. The estimated delivery date for the first order of Calming Pebbles is January 2020.

With its super minimalist design, the Calming Pebble is perfect for the professional who needs a non-distracting fidget toy for work that’s still satisfying, calming, and soothing.