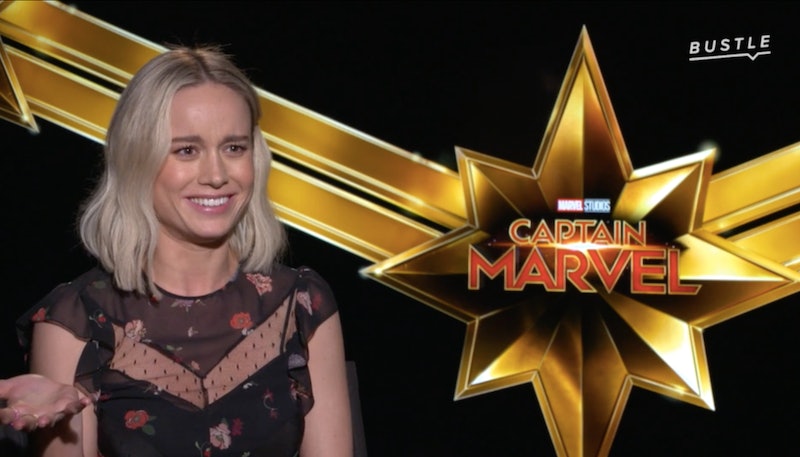 The first of two huge 2019 MCU releases is almost here. Captain Marvel opens on March 8, welcoming Brie Larson's Carol Danvers into the onscreen universe. Though the Avengers don't know her yet, she definitely has the best powers out of all of them. Marvel Studios President Kevin Feige referred to her as “the strongest character we’ve ever had,” per Vulture. Her powers include superhuman strength, speed, and flight — and your average superhero only needs one of those powers to thrive. If you had to choose between them, what would be your pick?

At the movie’s LA press junket, Bustle Entertainment Writer Sydney Bucksbaum challenged cast members Larson, Lashana Lynch (Maria), and Gemma Chan (Minn-Erva), plus co-directors Anna Boden and Ryan Fleck to a Marvel-themed game of Would You Rather — and she didn't take it easy on them.

Asked whether she'd rather train to be a superhero or an Olympian, Lynch, who plays Carol's best friend, has a hard time picking, considering she comes from an athletic background and even played an Olympian hurdler in Fast Girls. But Larson easily chooses. She's gunning for a shot at the 2020 team for a particular event, after it became a huge part of her training for the role.

One question that stumps the movie's star though, is whether she’d rather have the ability to fly or have super strength, two of Captain Marvel’s coolest powers. And Lynch has a pretty convincing reason for her choice, that’ll make you see how amazing and practical that power can be.

There's some controversy among the cast when they have to choose between becoming a hero or villain. Larson is shocked to find out how one of her castmates answered. “She did?! Dang, I gotta talk to her about that,” says the actor incredulously.

But the toughest choice lies between spoiling Avengers: Endgame or walking on broken glass barefoot. It's clear from everyone's responses just how much is at stake if you spoil anything for fans.

Throughout the game, it’s clear that the cast would love to have all the powers that Captain Marvel has in the movie. During a set visit, as reported by io9, Larson admitted that she accidentally over-trained for the role, mistakenly thinking she’d need to do her own stunts and mirror the hero’s strength as much as possible.

“I didn’t realize that most people don’t do their own stunts in these movies,” confessed the actor. “Everyone just went along with it. It wasn’t until we started shooting, and I started doing all my own wire work stunts, and flips and stuff that people were like, ‘You know, now we’ll tell you, nobody actually does this. We just didn’t want you to stop. But now that you’ve kind of accomplished this thing, we don’t normally do this.'"

But this experience helped her connect with her character a lot better, too. “I could just be like, ‘Renea [Moneymaker] and Joanna [Bennett] got it, I’m gonna go eat some cake,'" she said of her stuntwomen. "But instead, it’s really become a huge part of how I learned more about her, and became her, and embodied her, was through discovering my own strength."

Captain Marvel may help you discover more of your own, too. See the first chapter of Carol's story when the new movie opens this Friday.