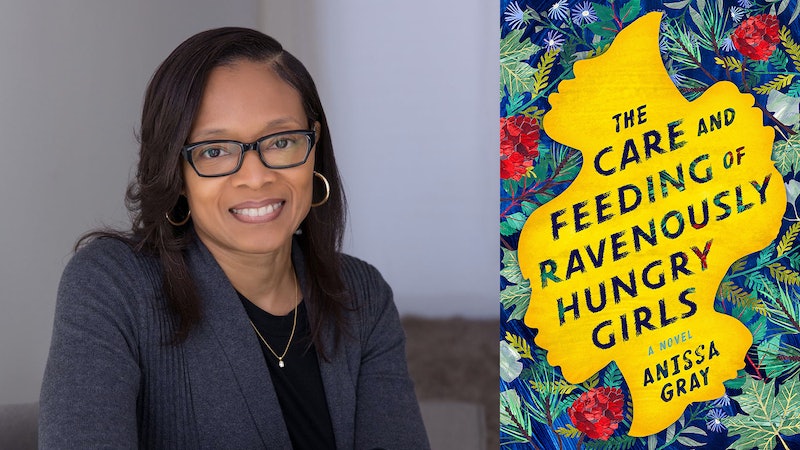 There's a lot you can inherit from your family: your name, the shape of your nose, the color of your eyes — as well as pain, secrets, and trauma. In her debut novel, The Care and Feeding of Ravenously Hungry Girls, author Anissa Gray explores how, when a woman and her husband are sent to prison, a family falls back on each other in the face of this new hardship, even as they come to terms with the wounds that have shaped them. "I think the bottom line is, you know, families are complicated," Gray tells Bustle. "But at their best, they are soft places to land."

The Care and Feeding of Ravenously Hungry Girls begins during the sentencing of restaurant owner Althea and her husband, Proctor, who have just been convicted of running a fraudulent charity after a very public and emotionally-charged trial. After learning the two are headed to prison for several years, their family deals with the fallout — specifically, the question of what will happen to Althea and Proctor's two teenage daughters, Kim and Baby Vi.

The book is told from the points-of-view of Althea and her two younger sisters, Viola, and Lillian. Viola, the middle sister, has just separated from her wife, and after years of recovery from an eating disorder, has relapsed. Meanwhile, the youngest sister, Lillian, has moved into their old family home and stepped into the role of caretaker for Althea's children, as well as for her deceased ex-husband's elderly grandmother. When Althea's situation reunites them, the three sisters work to untangle their circumstances and their relationships with each other.

"I think the bottom line is, you know, families are complicated," Gray tells Bustle. "But at their best, they are soft places to land."

Gray is one of five children, and she has three sisters of her own. "I think there's something special in that dynamic," she says. "In a large family, you all love each other, but different things come up and you get different factions that form, and those are movable factions. But, when it all sort of comes down to it, there's still that gang of five. So that's sort of how I look at these sisters."

Gray emphasizes that families are complicated, and the bigger the family, the more complicated. "When I go home, I am who I was when I was five still, in the dynamic with my siblings. My oldest sister is who she always was. It doesn't matter what we've accomplished in life and what we've done, when we're together there's still that dynamic," she says. "So, how do you grow up and deal with each other when everything around you sort of changes?"

"When I go home, I am who I was when I was five still, in the dynamic with my siblings. My oldest sister is who she always was. It doesn't matter what we've accomplished in life and what we've done..."

Gray sees the crime as the triggering element for the book, but not the most important event. "The way I looked at the crime was that everything that sort of swirled around it, how it affected this family, the division in the family. You have two parents who are going to prison now. What does that mean for their children? What does that mean for the siblings they leave behind? How do they themselves sort of come to terms with what they've done?" she says. "I thought it was very important to deal with the fact that, you know what, sometimes people do bad things, and there's a punishment for that. There's no question that these people are guilty. But what then? And I was very interested in the 'what then?'"

As the family navigates these questions, they confront some painful elements of their history. Each one of the sisters holds onto dark secrets from a childhood that was defined by an absent and abusive father.

"When I sat down to write, I wanted to tell an honest story, and I don't know about your family or anyone else's family, but my own family is not perfect. Things happen, and what matters is sort of how you deal with those things," says Gray. "So I was very interested in looking at family through that lens of imperfection. And for every family that can occur to a greater or lesser degree. But in this family, it was a question of abuse, and how do you deal with that, how are you honest about that?"

"There's no question that these people are guilty. But what then? And I was very interested in the 'what then?'"

The sisters cope with the pain of both the past and present in different ways. For Gray, this is how the title — The Care and Feeding of Ravenously Hungry Girls — speaks to each of the characters. "In the case of Viola, it is a literal eating disorder. In the case of Althea, what I see... is sort of this boundless emptiness, and you see that in the crime she commits and how she treats the people she loves," she says. "So, taken together, you have these people who have endured various traumas and they're coping with those things in some dysfunctional ways, trying to fill these hollow places."

Meanwhile, Althea's daughters struggle to deal with their parents' arrest. Their future is uncertain, they are constantly harassed by angry community members, and to make matters worse, Althea refuses to see them from jail. These two sisters, however, handle their difficulties differently from their mother and aunts. While Lillian, Viola, and Althea have held onto much of their pain in secret for decades, Kim and Baby Vi act up and speak out in the moment. Kim causes trouble at school and spends all day writing furiously in a notebook, and Baby Vi continually demands to know when they are going to go see Althea.

"So, taken together, you have these people who have endured various traumas and they're coping with those things in some dysfunctional ways, trying to fill these hollow places."

Gray says she was interested in dealing with the generational differences in how people deal with trauma and upset. "You have the sisters who are much more bottled up. They kept a lot of their trauma and their pain to themselves," says Gray. "You have the younger generation, which I think is generally true certainly in what I observe in my nieces and nephews, who are much more vocal about things that upset them, who have expectations of how they should be treated, which I think is wonderful."

In spite of the complications and the hardships that Gray shows in this book, she still feels hopeful for the characters. "Maybe the message is: it may not be pretty, it may not be tidy, it may not be neat, but there is at least hope," she says.