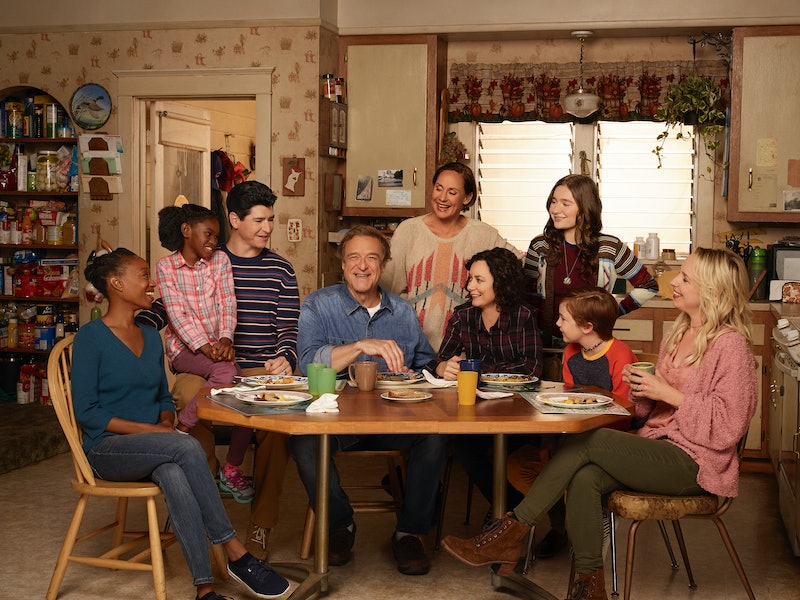 It wasn't long ago that Roseanne fans were celebrating the reboot of their favorite '80s family sitcom helmed by matriarch Roseanne Barr herself. After a 20 year hiatus, they were eager to welcome the Conner family back into their living rooms. Viewers couldn't wait to watch them banter over dinner at the same mismatched kitchen table and chairs, or learn another life lesson before that patchwork quilt draped over a well-worn couch. However, after Barr made a slew of racist comments online, the long-anticipated family reunion was cut short, and Roseanne was cancelled for good. A product of controversy, The Conners premiers on October 16, and although reality is still setting in, the remaining Conners cast members are optimistic about the stories left to tell.

So how did all of this happen? In May, two months after the reboot premiered, Barr posted a racist tweet attacking former White House adviser Valerie Jarrett, per People. Many people, including ABC and her fellow cast members, swiftly took action to denounce her behavior. Others were left speechless, and wondered how the show, and the network, would recover.

Now that production of The Conners is in full swing, the remaining cast have been able to gather their thoughts to share with the world. Most of all, they cling to the hope that you'll still sit down in front of your TV and join them on Tuesday nights. Here's what they've said about it.

At first, Barr's on-screen husband, John Goodman, chose to stay silent after Roseanne officially ended, saying that he'd "rather say nothing than to cause more trouble," according to Entertainment Tonight. Since then, and since the birth of The Conners, he has decided to keep moving forward. “We’re leaning on each other when we do this show,” Goodman told People. “And supporting each other — that’s a very strong feeling among us. It’s different, but we can create something new from it. Let us finish the story on our own terms. Come along with us and see how we do.”

Gilbert was one of the first cast members to come forward in response to Barr's comments on social media, and she didn't sugar-coat the fact that she was deeply disappointed. "Roseanne’s recent comments about Valerie Jarrett, and so much more, are abhorrent and do not reflect the beliefs of our cast and crew or anyone associated with our show," she tweeted. "I am disappointed in her actions to say the least."

She followed up with a comment about her adoration for the show they have all been a huge part of. "This is incredibly sad and difficult for all of us, as we’ve created a show that we believe in, are proud of, and that audiences love— one that is separate and apart from the opinions and words of one cast member," she said.

Metcalf was one of the more quiet ones before joining Goodman and Gilbert in the People interview that brought them together on the subject. She said that she's still mourning the loss of a family member, in real life, and on TV. “There was a lot of risk involved,” she said in the interview. “But we all decided as a group to take the risk, knowing that we could be judged by deciding to come back.”

Fishman, who plays D.J. Conner, wrote that he was “devastated, not for the end of the Roseanne show, but for all those who poured their hearts and souls into our jobs, and the audience that welcomed us into their homes.” He also noted that the "cast, crew, writers and production staff strived for inclusiveness, with numerous storylines designed to reflect inclusiveness. The words of one person do not exemplify the thinking of all involved.”

On her private Twitter page, Goranson said she was devastated by the show's cancellation, "but more devastating are the effects of hate speech and racism on individuals and society.”

She's only in fourth grade, a new member to the Roseanne cast in its last season. She never addressed the Barr controversy directly, but shared her optimism in the face of difficulties on her Instagram. "This recent experience has taught me at an early age that life doesn't always go the way we plan it," she wrote. "However, while we still have breath in our lungs we have to count our blessings and keep pushing forward."

Sometimes, a picture is worth 1,000 words. So instead of saying anything, Galecki posted a picture on Instagram that celebrated diversity in the face of hate. People confirmed that he would appear on The Conners in September.

Kenney joined the cast of Roseanne as a new addition to the reboot, and she was crushed to see it end the way it did. But she's excited to be a part of the family's newest venture. "As I called my manager to quit working on Roseanne, I was told it was cancelled," she tweeted. "I feel so empowered by @iamwandasykes, Channing Dungey and anyone at ABC standing up for morals and abuse of power. Bullies will NEVER win." She also wrote that she was "hurt, embarrassed, and disappointed" by Barr's initial comments.

Although the past year has been a rollercoaster of emotions and decisions for much of the cast of The Conners, this reincarnation of their family story will hopefully give them, and their fans, the lessons and the laughs they never seem to get tired of.