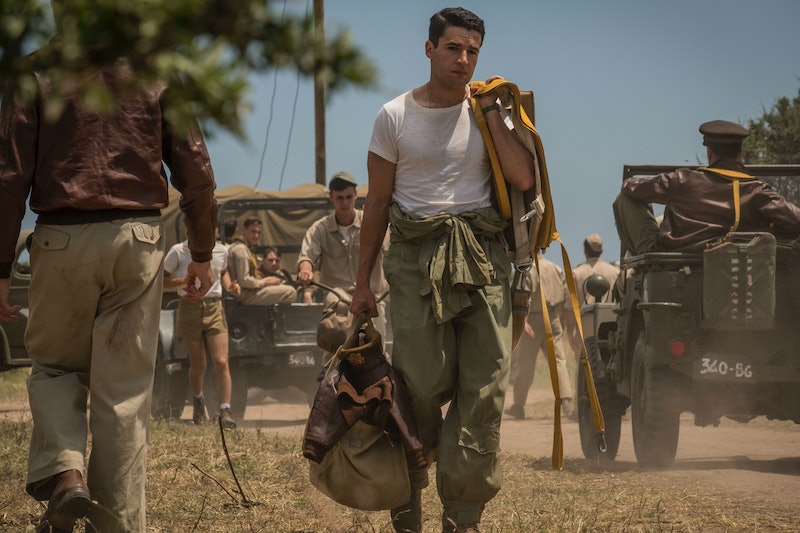 Philippe Antonello/Hulu
By Sadie Trombetta
May 17, 2019

Hulu won the hearts of many literary lovers with the release of their critically acclaimed series adaptation of Margaret Atwood's The Handmaid's Tale. Now, they're back with the book-to-screen adaptation of Catch-22 by Joseph Heller. It's probably been a while since you read this classic satire, so before tuning into the first episode of the new series, which premieres May 17, you might want to refresh on the Catch-22 book ending. Caution: Book spoilers — and potential show spoilers — ahead!

Maybe it was assigned to you as summer reading in school, or you read it later in a literature course at university. Perhaps you came across it in the classics section of your local bookstore, or found it on the "Greatest American Literature of the 20th Century" display at the library. Maybe, following the 2016 election, you discovered it on a list of books to read in the era of Donald Trump. No matter how you were first introduced to it, Joseph Heller's Catch-22 is one of those novels that simply cannot be avoided. It's considered one of the most significant novels of the last century, and although it was originally published in 1961, its importance and its influence can still be felt by readers nearly 60 years later.

A satirical novel set during World War II, Catch-22 follows the life and career of Captain John Yossarian, a B-25 bombardier with the U.S. Army Air Force, and the other members of the fictional 256th Squadron. It's non-chronological, third-person narration takes readers forward and backwards in time, showing the events of the novel from the point of view of many different characters. Though its plot is winding and layered, Catch-22 mainly focuses on the experiences of Yossarian and his fellow airmen on the island of Pianosa, where they struggle to reconcile their duties as members of the U.S. military with their own set of wants, needs, and morals. As you can imagine, maintaining the balance between patriotic obligation and personal responsibility becomes increasingly difficult as the story progresses.

So, what happens at the end of Catch-22? Throughout Heller's novel, the narration jumps around in time, but as the book nears its ending, the story not only becomes clearer and more linear, it gets a whole lot darker, too. Following the death of his friend and fellow airman Nately, Yossarian refuses to participate in any more missions. Instead, he walks the ravished streets of Rome where he sees human horror in full form. Soldiers and civilians alike are being beaten, murdered, and raped on every street corner. Yossarian witnesses friends die horrific deaths and airmen disappear as the colonels and generals above him continue to push their men into treacherous battles. As everyone around him dies or disappears, Yossarian loses his grip on reality.

Eventually, Yossarian is caught by his superior officers, who give him an ultimatum: He can either face a court-martial for his insubordination, or he can be discharged honorably from his duties. But there is a catch with the latter, and in order to be sent home, Yossarian must go on-the-record in support of a new policy that would require airmen to fly a minimum of 80 missions. To do that, Yossarian reasons, would be to send even more men to their death.

It isn't until Yossarian gets word that his friend Orr has made it to Sweden, on a rubber dinghy no less, that he realizes there is only one way he will make it out of the war alive with his morals somewhat intact — to run. Like the rest of the novel, this inconclusive ending borders on the absurd. Like war itself, it is violent, chaotic, and wholly unsatisfying.

So, will Hulu's Catch-22 have the same dark, inconclusive ending as Heller's novel, or will the show offer a clearer, possibly more optimistic final scene? It remains to be seen.