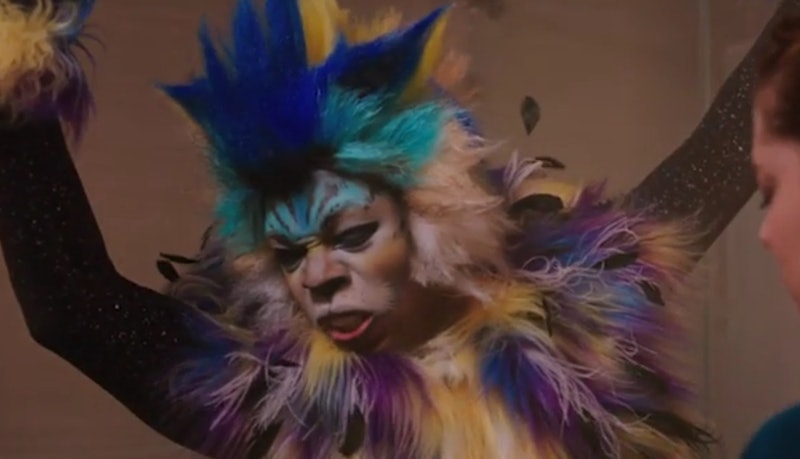 Spoilers for Crazy Ex-Girlfriend Season 4, Episode 9. It's obvious by now that Crazy-Ex-Girlfriend's Rebecca Bunch hates cats, but her animosity for the animals is brought to new heights in the Jan. 11 episode, when Jellicle cats keep popping up and singing weird songs about her life. She's understandably weirded out by their presence, but the cats in Crazy Ex-Girlfriend actually prove to be a great storytelling device, clearly outlining the five stages of Rebecca's disastrous date with a guy named Jason.

How did all of these felines end up in West Covina, you ask? While Rebecca is on a site called SheSmash: Porn for Feminists, she sees a pop-up news video warning that there are feral cats running all over San Gabriel Valley. "Agh, I hate cats," Rebecca exclaims. "Both the animal and the musical." However, it seems like those fateful Santa Ana winds have magically swept some of these kitties straight to her door, as she's greeted by five people dressed in costumes and makeup straight from the Andrew Lloyd Webber musical. And although each animal has a different name, they all have something to say about her current situation — namely, her attempt to simply have a successful date.

It's obvious that this kitty (played by Riki Lindhome) is frisky, and after watching her dance, Rebecca draws a similar realization. "I'm filled with desire, I need to be fed," the cat purrs, "don't be mad if you find crumbs, 'cause I like to eat in bed."

When Bunch wonders what the surreal song meant, Hungry Cat returns to exclaim, "I think you know!" "Oh right," Rebecca replies. "I need to get laid." (Her visit to SheSmash also should have tipped her off.)

As a result, Rebecca goes on a date with Jason, who's canceled on her once before, but her sexy plans are thwarted when she gets a yeast infection from wearing cheap workout tights. "This sucks more than the song about what makes a Jellicle cat, and then it just goes on to describe literally any cat," Rebecca laments.

Enter Itchy Cat (played by Fred Armisen), who scats around the bathroom, scratching himself and singing about Monistat. Rebecca, meanwhile, is barely holding it together, an uncomfortable fire building in her nether regions. She finally manages to banish him by yelling, "Stop ruining my vagina like you ruined musicals!"

Todrick Hall plays a feline who only appears when something funky's going on. The "funky," in this case, is bacterial vaginosis, which Rebecca manages to give herself by treating her yeast infection too aggressively. "Funky Cat is all the rage when something's off with your pH," he wails. Because not only does he ooze sex, he sings, but green discharge. Rebecca's super grossed out by his sensual performance, but it's nothing compared to Valencia and Jason, who are forced to bask in her vaginal odor in the next room.

This particularly festive kitty appears when anything exciting happens (in this case, Rebecca getting it on). But rather than sing, Elated Cat does an interpretive dance to describe her joy. This rainbow of happiness is played by Rebekka Johnson, who is perhaps best known as Dawn Rivecca on GLOW.

Much like Icarus, Rebecca flew too close to the sun. While she and Jason are making out in the bedroom, newfound friends Nathaniel and Greg swing by to tell her how they feel (unbeknownst to each other). This is an obvious cock-blocker, and all three men leave without Bunch getting any. The Good Place writer Megan Amram plays Nostalgia Cat, who keeps dwelling on the last time she boned. "Nostalgia" is a clear parody of "Memory" from Cats, but rather than being sad about how her beauty has faded, she dramatically trills about her last lay. It's a sentiment Rebecca can certainly relate to, despite her best efforts.

Although someone in the Crazy Ex-Girlfriend writers room clearly has it out for cats, both the musical and furry friends still prove to be an effective narrative tool — despite Rebecca's claim that the Broadway show has no plot.