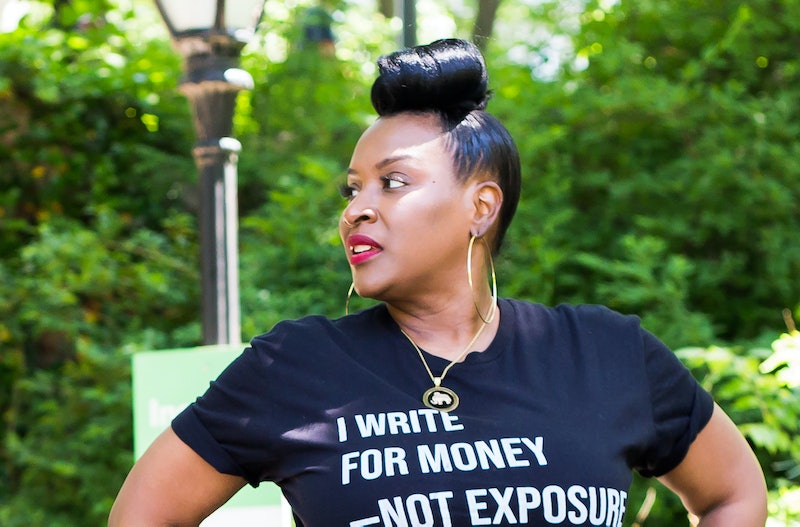 In this op-ed, writer Taiia Smart Young describes what it was like growing up in New York City during the Central Park Five case and how it changed the way she parents her son.

I’ll never forget when I saw the 1989 New York Daily News headline: “Park marauders call it ‘WILDING’ … and it’s street slang for going berserk.” I was 16, and my first thought was, what the hell is “wilding”?The headline read like it was written by someone who was foreign to both youth and hip-hop culture but was desperately trying to be down. The story described a “wolf pack” of black and Latino boys who had allegedly terrorized cyclists and assaulted and raped a 28-year-old jogger in New York’s Central Park, one of my city’s crown jewels.

The attack dominated the news, and I learned the names and saw the images of the accused: Antron McCray, Kevin Richardson, Raymond Santana Jr., Yusef Salaam, and Korey Wise. They were boys who looked like my cousins, high school classmates, and guys I skated with on Saturdays at Empire Roller Rink in Brooklyn.

I never thought they were guilty. It was a gut feeling. The pieces to the crime puzzle never really fit, and Ava DuVernay explores that in her new Netflix series When They See Us, which is out Friday.

Years before the gruesome attack in Central Park, my mother, who was woke back when we were just calling people “conscious,” schooled me on how the media — an industry I aspired to be a part of — could manipulate the narrative to railroad people of color. With the Central Park jogger case, I watched this manipulation play out in real time. The media paired divisive words with alarming images to feed fear and reinforce hideous stereotypes.

The Rotten Apple had a scary vibe when I was growing up in the 1980s. New York City was years away from getting pricey lattes, yoga studios, and gluten-free pizza. Trains were tattooed with colorful graffiti. Crack killed my neighbors. Metal detectors became a thing at my high school, and black and brown youths were dumped and forgotten in Spofford Juvenile Detention Center. The city was especially tender after Bernhard Goetz shot and wounded four black teens on a subway train, and a mob of white Howard Beach teens chased Michael Griffith, a 23-year-old black man looking for help after a car broke down, until he was killed by a vehicle on the Belt Parkway.

Thirty years after the Central Park jogger case, I’m the mother of an 18-year-old son.

So tensions were already high by the time the Central Park jogger case became the “crime of the century,” and it was easy for everyone to take sides. You were either Team They Didn’t Do It (mind you, there was no DNA or physical evidence linking the five teens to the crime), or you were Team They Did That Shit and prayed for them to be buried under the jail. Civil rights activist Al Sharpton, only 35 at the time, marched to support the Central Park Five. Others hollered about castration, and Donald Trump, who was then just a wealthy real estate developer, published a frightening newspaper ad calling for the five teenagers to be executed.

Despite the hate cloud that hovered over the city, I refused to stop feeling free. Youth made me feel invincible. But whenever I left the house to hang out with friends, Ma would press play on a speech designed to keep me out of the precinct and get me home safe at night. I knew that speech by heart: “Be a leader, not a follower. Don’t be loud. Be respectful. But most of all, don’t do anything to draw attention to yourself.” All of this was code for “your melanin is a threat in these streets.”

I didn’t always listen. Thankfully, I always got home in one piece.

Now it’s my turn to recite a similar script. Thirty years after the Central Park jogger case, I’m the mother of an 18-year-old son. Shateek is just a few years older than the men, the Exonerated Five, who were wrongfully accused and served seven to 13 years for raping Trisha Meili. This ugly story and their fate still haunts me. What happened in 1989 can happen again in 2019.

I escaped sharing the same fear my mother had when I was a teen until Sha started taking public transportation in middle school, which isn’t uncommon for city kids. Sha was 11 and heading home from a STEM program at NYU when he was stopped by police for the first time because “he fit the profile.”

Because of this, I require him to text me when he arrives and leaves an event. My husband and I need the first and last names of his friends, not just their Instagram handles. And now that he’s driving, we’ve discussed how to speak and move when, not if, he’s pulled over by the police. Our message is clear: “Be respectful. Don’t volunteer any information. Don’t sign anything. Call us.”

This drill annoys him. But I don’t care. He told us, “I’m not doing anything illegal, so why should I worry?” Oh, but if it were just that simple. Our script is inspired by the coerced confessions and videotapes that sent five teenage boys to jail for a crime they did not in fact commit.

I never want to crush Sha’s carefree spirit, scare him, or interrupt his plans to explore our incredible city, be it a cookout in Queens or basketball on Randall’s Island. But he has to be aware that his melanin doesn’t afford him the same security as his white male classmates. His afro, Biggie T-shirt, and address can all be weaponized to shape a narrative that doesn’t represent the truth about him. That’s the lesson my mother taught me so many years ago. That’s the lesson that the Exonerated Five learned the hard way.