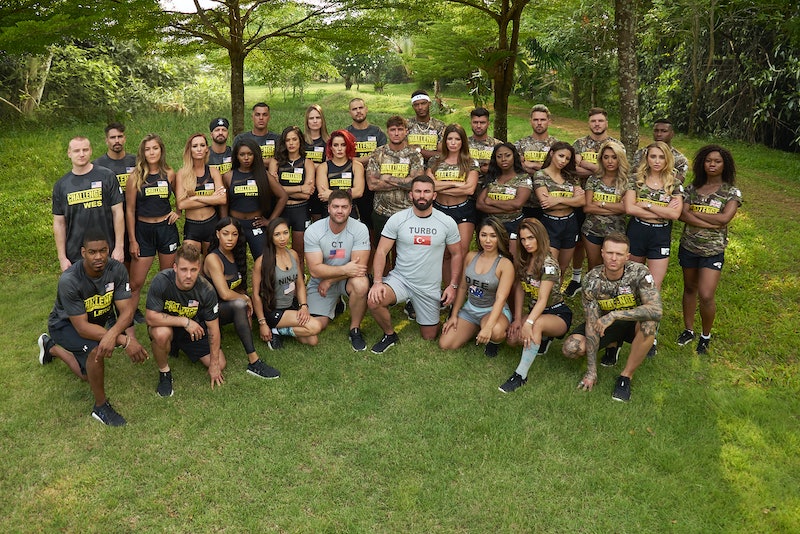 For the first time since The Ruins back in 2009, The Challenge will feature a two-team format. Its upcoming 34th season splits The Challenge: War of the Worlds 2 cast into two groups: 14 Brits and 14 Americans. Together, they'll compete for the chance to share a $1 million prize. Among those duking it out are reality TV legends and rookie competitors alike, but while the latter may be fresh to the show, they're no strangers to reality television: alums from Big Brother, Love Island, and Ex on the Beach UK are all included in the cast.

There's also a twist. In addition to the two different teams, there are four designated "reinforcements" who are not initially assigned to Team U.S. or Team UK. These cast members are CT Tamburello, Turabi "Turbo" Camkiran, Dee Nguyen, and "Ninja" Natalie Duran. The winner of the first challenge will get to pick two reinforcements to stay on their team for the remainder of the season.

Of course, let's not forget the one cast member who fans expect to see every season: TJ Lavin is back to host The Challenge and inevitably lecture anyone who merely thinks about quitting a challenge. Everyone knows how much TJ hates quitters. Hopefully, there aren't any in this cast. Here's where you've seen everyone before.

"Stealing" the prize money from Sarah Rice during the Blood Lines finale is by far his most remembered moment, but he has a lot to choose from.

West holds the record as the male contestant with the most elimination wins in Challenge history. He also caught a lot of flack when Kenny Santucci literally carried him during the Rivals final.

Cara Maria became the first individual winner of a season when she got first place in The Challenge: Vendettas.

Laurel is a major threat in the elimination rounds, with an impressive record of nine wins and one loss.

Paulie's many fights with Kyle got him a lot of screentime. In regard to his game play, he managed to hang on during War of the Worlds I by winning redemption challenges all the way to the final.

Original Show: Are You The One? Season 4

Tori is known as a major competitor with a laidback disposition, rarely causing controversy in the game itself.

On Free Agents, Jordan flipped all of the cards to send himself into an elimination against Bananas. He lost, but he did prove that he's fearless.

Zach sent himself into elimination to prevent Bananas and Tony from going in. He and his partner Amanda got sent home, but he proved his loyalty.

Leroy comes up short way too many times to count. Bananas' best buddy deserves a championship at least one time.

Ashley pulled a Bananas when she took the prize money from Hunter Barfield on Final Reckoning, but she earned even more cash with a million dollar prize.

Faith is relatively new to the game, but a solid performer so far. In the house, she got into a love triangle with Cara and Kyle during Final Reckoning.

Original Show: Are You The One? Season 5

During his first season, Josh didn't make too much of a splash, but maybe War of the Worlds 2 will be the season he makes his mark.

After an early elimination on Battle of the Exes 2, Nany and Bananas battled their way back into the competition during Ex-ile competitions.

Kyle is more known for his personal life than his challenge performances, but he always provides premium content with his many love triangles and ongoing rivalry with Paulie.

He's only been on one season, but he managed to make an enemy in Wes....and many other Challenge vets on War of the Worlds I thanks to his love of controversy.

Georgia and her partner Hunter had a solid streak of performances during her first season and she got into a short-lived romance with Bear.

Theo won second place during his very first season. Maybe he'll one-up himself with a first place finish during his second.

Kayleigh quit Vendettas after declaring that she would not put up with bullying from other contestants in the house who went too far.

Joss battled against Derrick for an eleven-round elimination during Vendettas.

Zahida didn't have a big impact during her first season, but hopefully she can make her mark this time around.

Memorable Moment: Rogan did not make it through the first challenge on Vendetta; he didn't even get to move into the house. Now, he has a lot to prove.

Original Show: Survival of the Fittest

CT had too many epic moments to choose from, but it was pretty epic when he came out of retirement and won the Invasion of the Champions his first season back.

Mathematically speaking, Turbo has the best ratio of wins and appearances in the cast. He won his very first challenge, and now he's back hoping for a back-to-back victory.

She got impatient with Turbo during a challenge on War of the Worlds I. They fought over their different strategies, but ultimately won the competition... before an intense verbal confrontation.

Dee stepped in for her girl Ninja in the fight with Turbo, making the drama a million times worse.

Whether a vet or a rookie, everyone on War of the Worlds II is thirsting for a win...and camera time. See who takes home the crown when The Challenge premieres Aug. 28 at 9 p.m. ET.

More like this
Mia & Peter Shared Cryptic Clues About Their Relationship After 'FBoy Island' Season 2
By Brad Witter
Everything To Know About 'FBoy Island' Season 3
By Kadin Burnett
The 'Big Brother 24' Racism & Bullying Controversy, Explained
By Jake Viswanath
7 Of The Highest Highs (& Lowest Lows) From Love Island 2022
By Victoria Sanusi
Get Even More From Bustle — Sign Up For The Newsletter