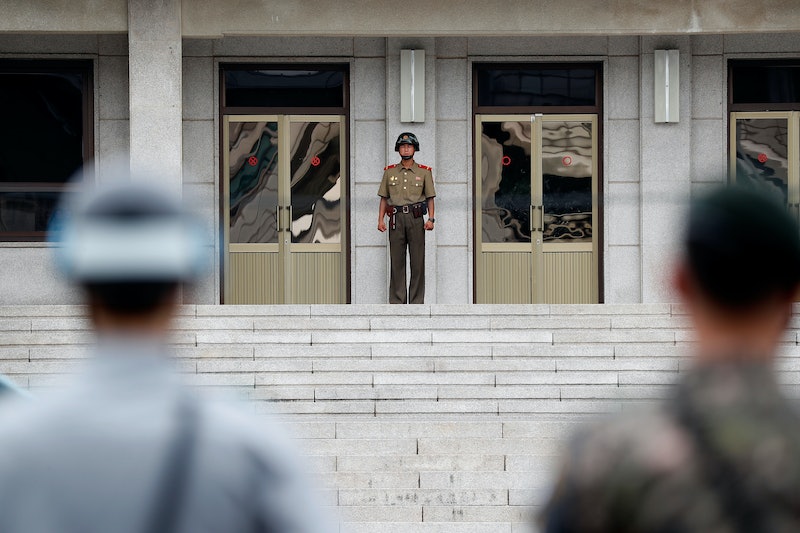 Following reports from U.S. intelligence sources that claim North Korea has successfully produced miniaturized nuclear warheads capable of being installed into intercontinental ballistic missiles, the prospect of nuclear war has been looming large. And yet, even though tensions between the two countries have been on the rise this year, it's still unclear just how likely an actual armed conflict is. Basically, depending on how you look at it, the chances of war with North Korea in 2017 could be thought of as either pretty remote or concerningly possible.

On one hand, given the increased saber-rattling between North Korean dictator Kim Jong-un and American president Donald Trump, it's easy to see why so many people are bracing for a military conflict. On Tuesday, Trump warned North Korea that further provocation would be met with "fire and fury" on a massive scale, a threat the North Korean regime responded to by threatening to bomb the U.S. territory of Guam.

All this is happening amid claims from U.S. intelligence sources that North Korea now has missiles capable of carrying nuclear warheads to the American mainland. This has understandably fueled the perception that war with North Korea is unavoidable, if not imminent.

But if North Korean leaders know better, they won't strike the United States with nuclear weapons. That outcome is unlikely, because if North Korea did strike, it would almost certainly mean the U.S. would retaliate with a nuclear counter-strike, an event that could cause staggering mass casualties of North Korean civilians, as well.

Also, it's notable that while Trump has indulged in some tension-escalating and inflammatory rhetoric toward North Korea, Secretary of State Rex Tillerson sought to tamp things down on Wednesday, insisting that he didn't believe war with North Korea was in any sense imminent, and insisting Americans should "sleep well at night." Although it's ultimately Trump's decision to make, this at least suggests there's an institutional resistance to the idea.

Secretary of Defense James Mattis, on the other hand ― long considered reluctant to engage militarily with North Korea ― also released a statement on Wednesday warning the country of consequences, and it might be concerning for anyone hoping to avoid military conflict with North Korea. He said:

The DPRK must choose to stop isolating itself and stand down its pursuit of nuclear weapons. The DPRK should cease any consideration of actions that would lead to the end of its regime and the destruction of its people. ... The DPRK regime's actions will continue to be grossly overmatched by ours and would lose an arms race or conflict it initiates.

Although the U.S. is historically quite willing to engage in preemptive attacks (most notably in the case of the Iraq war, which was predicated on false intelligence about weapons of mass destruction), the fact that North Korea is already in possession of nuclear weapons, and sits so perilously close to prime American allies like Japan and South Korea, lends itself to a continuing state of limbo.

That's not to say that there definitely won't be a war, or that circumstances couldn't change. President Trump has no previous experience on the world stage, and during the campaign he spoke about deploying nuclear weapons with disturbing ease. But even amid a tense and fraught situation, there are clear reasons to think war can still be averted.